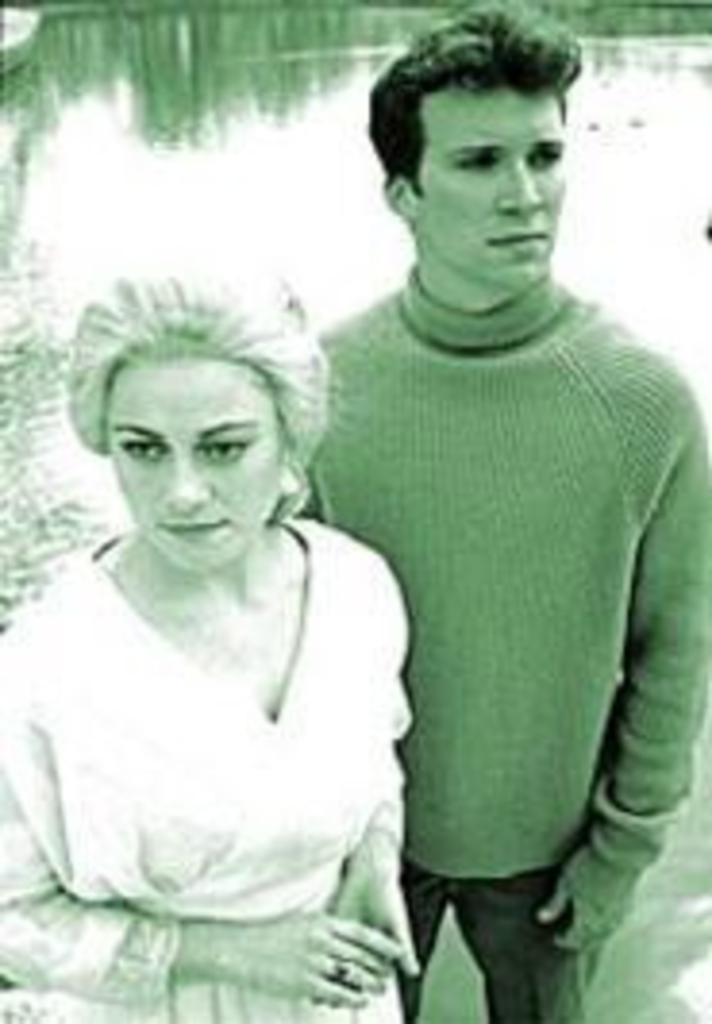 Maybe it’s just me, but when somebody starts singing the theme song to One Day At A Time I automatically think of Eddie Van Halen. Valerie Bertinelli just will always be the wife of that hair-band guy. Schneider will remain the constantly jingling, jean-clad guy in a wife-beater shirt who, frankly, was scary to any small girl growing up in the ’70s. And Bonnie Franklin will always be known as Ann Romano … right up there with Alice as one of TV’s first looks at a single leading lady doing just fine raising her kids without a leading man. Nine years of playing an independent feminist will be what she is most remembered for, unless the New Theatre Restaurant (9229 Foster, Overland Park) production of Same Time, Next Year, starring, you guessed it, Bonnie Franklin, brings international critical acclaim. But let’s just take it one day at a time. Beginning tonight at 6, this comedy about the changing politics, sociology, and fads in America will, if anything, cause you to flash back to the days when America watched Mackenzie Phillips drug herself into waifdom. Same Time, Next Year runs through June 18, with show times Tuesday through Sunday at 6 p.m. and matinees scheduled Sundays and Wednesdays at noon. Tickets range from $18.95 to $37.95, which includes dinner. For more information, call 913-649-0103.

What does sound look like? If a tree falls in the forest and no one’s there to hear it … oh, never mind. Um, anyway … for an answer to one of life’s great questions (i.e., the former), check out the new James Brinsfield exhibit, Post Abstraction, at the Joseph Nease Gallery, 1819 Central. In his new work, Brinsfield develops a visual system to represent sound. The project reflects his interest in audio technology and in documenting how sound “looks” as it’s being recorded. Also at the gallery are Installation by John Torreano, which shows a wall installation of several of his “Lucky Balls” (insert your own lucky-balls joke here), and Constant Chameleon by Rachel Hayes. The exhibition opens tonight from 6 to 9 and continues through June 3. Call 816-421-2166 for more information.

He’s done it all. Fred Ho, a baritone saxophonist, composer, and writer who spends his free time being a political activist and leading the Afro Asian Music Ensemble and The Monkey Orchestra, is one of today’s leading Asian-American artistic talents. And he’s going to show some of it tonight at the Lawrence Arts Center, 200 W. 9th Street, Lawrence, Kan. He’ll combine folk music elements from Asia and the Pacific Islands within a 20th century African-American context influenced by such cats as Duke Ellington, John Coltrane, and Cal Massey. The result: an elaborate swinging and soulful mix. See it tonight or tomorrow night at 8 at All Souls Unitarian Church, 4500 Warwick. Each show is $12. For more information, call 816-822-2721.

Although best known in recent years for being the (now former) fiancé of supermodel Claudia Schiffer, the preternaturally tan David Copperfield has long been known for various wacky stunts, such as making the Statue of Liberty disappear. See the suave über-magician perform tonight at the Kansas Expocentre in Topeka. Show times are at 6 and 9 p.m. For more information, call 785-234-4545.

Bond. Edward Bond. Stories about the sea’s beauty and ferocity will go on as long as the oceans wave their reminder. The University of Missouri-Kansas City’s theater department presents the final installment of Edward Bond’s The Sea today. It’s a little like Gilligan’s troubles, only this small boat capsizes outside of a small coastal village, leaving the main character, Willy, to mourn his friend’s death. But wait! It’s like a Ron Megee spoof. The residents of this pretty little pueblo think Willy is an alien bent on demolition. The contemporary British playwright is known for his controversial and often politically charged works. The show begins at 2 this afternoon in the Helen F. Spencer Theatre, Center for the Performing Arts, 4949 Cherry Street. Tickets cost $6. For more information, call 816-235-2700.24 Monday

Because of him you can fly into Kansas City and stroll through many parks whistling “zippidee doo dah.” Late Mayor Ilus Davis did a lot for Kansas City. Local history books will highlight this man, who spearheaded development of Kansas City International Airport and was responsible for doubling the size of the city’s parkland. But let’s talk about something truly great: In 1963, Davis pushed for a city ordinance requiring equal treatment of all residents in public places. This civil rights measure squeaked through a public vote of 45,476 to 43,933. All in all, wouldn’t you say that’s a pretty good legacy to leave behind? Davis died in 1971, but all these years later, he is still a topic for discussion. The Charles N. Kimball Lecture will feature a longtime friend of Davis, Gerald W. Gorman, as he presents “Ilus Davis: Examplar of the Greatest Generation.” Learn more and give Davis his props by attending at 4 p.m. in the Pierson Auditorium, 50th Street & Rockhill Road. Best of all, this educational event is free. For more information, call 816-235-2700.

If you read last week’s Monday blurb, you might have been ecstatic to know that Judith Viorst’s Alexander and the Terrible, Horrible, No Good, Very Bad Day was coming to The Coterie Theatre to please all of the Alexander-lovin’ youngsters. Well, here’s a retraction: Alexander is coming — in 2001. But there’s something just as fun taking the stage. It’s Maurice Sendak’s Really Rosie, starring the Nutshell Kids, with music by Carole King. Here’s what you need to know about Rosie: She’s like a miniature Bette Midler in Beaches; she has the uncanny gift of turning an ordinary afternoon on drab city streets into a magical showbiz fantasy. Really Rosie begins today with performances at 10 a.m. and noon. The show runs through May 21. The Coterie Theatre is located on level one of the Crown Center Shops, 2450 Grand. Tickets are $6 to $8. For more information, call 816-474-6552.

When you hear the word “incorporated,” it’s possible to be turned off by the word’s businesslike sound. But it really means “to have united forces,” and that’s what Old Northeast Inc. does. The company unites community resources and neighborhood associations in revitalization efforts. In celebration of National Community Economic Development (CED) Day (yes, there’s actually a day for this), Old Northeast Inc. is holding an open house at one of its new construction sites, a single-family home at 657 Brooklyn, and a rehabilitated single-family home at 714 Benton today from 4:30 to 7:30 p.m. The event’s theme is “Educating America About CED.” Information and refreshments will be provided at both sites. Hey, they went through enough trouble to get their own day — you might as well learn about it. For more information, call 816-231-3707.