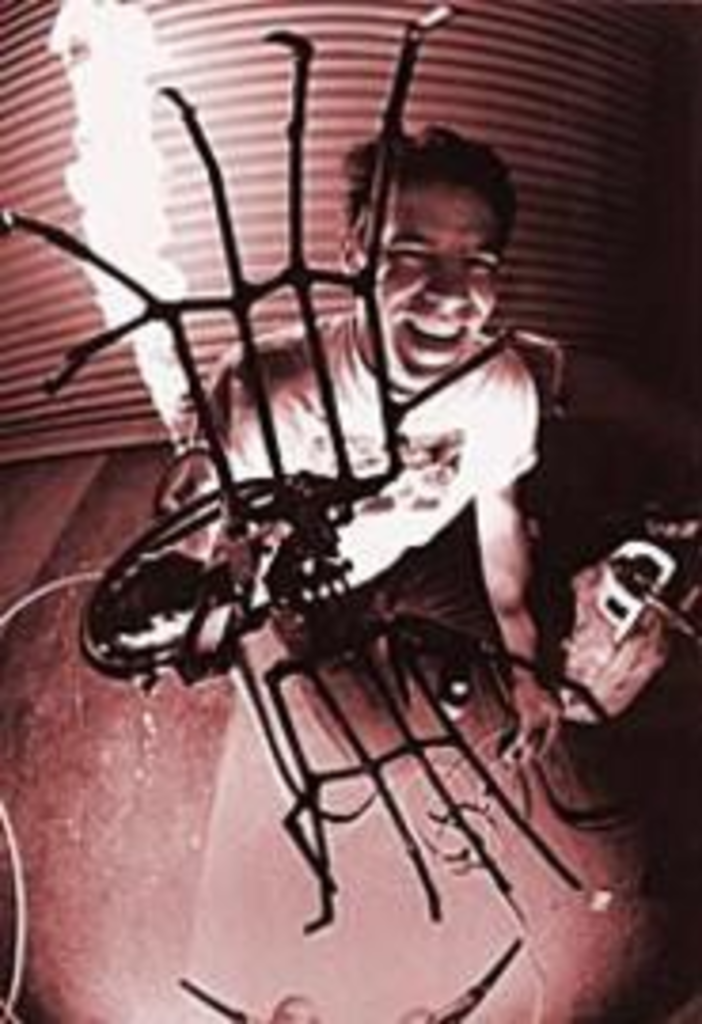 A fire-breathing, three-headed dog; kissing robots; revolving fire cages; and a jaw-snapping flamethrower barbecue? What’s this, FAO Schwarz for the underage deranged set? The fire marshal says this art show must go outside because something might catch fire. Seemen will present an evening of interactive art at Johnson County Community College’s Commons Plaza at 6 p.m. Based out of San Francisco, Seemen is a collaborative “postindustrial folk art” group led by Kal Spelletich — a modern-day mad scientist. The audience will be able to manipulate machinery made of blue-collar elements, such as propane, metal scraps, air hoses, junkyard treasures, and hopefully some duct tape, power drills, and real-life Transformers. Spelletich says his work is about real things people experience in life and that he’s not after the wine-and-cheese patron. So all you gearheads out there, this one’s for you. For more information, call 913-469-8500, ext. 3604.

“Dude, I saw the CRAZIEST show last night!” How many times have you heard this one before? Well, Wesley Willis’ performances might not involve firebreathers, anti-Christ theatrics, or guitar smashing, but they do provide a truly unique showcase for a certifiable schizophrenic. Hailing from the urban sprawl of Chicago, Wesley Willis is probably the most interesting character in the underground rock scene. He went from being a homeless street performer to a cult hero, got signed to a major label with his band, the Fiasco, and now tours the country as a one-man band with his trusty keyboard. Some of his most recognizable songs deal with his love of rock and roll bands and of the rock lifestyle (see tunes such as “Alanis Morisette” and “Napalm Death”), but a good number of his tunes describe his battles with what he calls the “demons” that reside within his head. To hear him scream profanities like a banshee and see his big pearly-white smile is to know happiness. Come see Willis’ large-and-in-charge live show tonight at Davey’s Uptown, 3402 Main. For more info, call 816-753-1909.

In 1990, Robert ParkeHarrison graduated from the Kansas City Art Institute, and last year he became a Guggenheim grant recipient. ParkeHarrison will be back in Kansas City today giving a free lecture about his work. Creating pictures that are amalgams of photography, painting, sculpture, and performance, he produces work that has been said to overstimulate the retina. His allegorical scenes “present a compelling vision of the artist as a contemporary mythmaker, shaman, inventor, fool, and healer.” This lecture is presented in conjunction with the American Photography: Recent Additions to the Hallmark Photographic Collection exhibition. To learn about the reality of these surreal works, be at The Nelson-Atkins Museum of Art, 4525 Oak, at 7 p.m. For more information, call 816-561-4000.

Jamie Anderson likes girls, and she writes about them in her songs. Anderson has been touring nationally since 1987 and has been called a performer akin to a mixture of Mary Chapin Carpenter and Suzanne Westenhoefer. So be prepared for her to sing funny. Calling herself a singer, songwriter, and parking lot attendant, she’ll play songs from her recent album, Drive All Night. You won’t have to drive all night to see her. She’ll be crooning her lesbian lyrics at All Souls Unitarian Church, 4501 Walnut, at 8 p.m. Tickets are $15. For more information, call 816-691-8785.

It’s about damn time the world started thinking more about death. According to the Funeral & Memorial Society of Greater Kansas City (a nonprofit group of living volunteers), most of those who die will not have thought about themselves as dying even two days before their death. Now, who can stand for that? Those two days of life left should be spent making funeral arrangements and deciding who gets the car and the TV, and who has to take care of Uncle Joe and his one-legged pet weasel. See, these are truly matters of life and death. If you’d like to learn more about initiating conversations with your family about dying, survivors, healthcare proxies, living wills, preferences for medical treatment, funeral arrangements, and which Whitney Houston song not to play at the wake, attend “Before I Go You Should Know,” today at 2 at All Souls Unitarian Church, 4501 Walnut. It’s time to plan ahead for when you’re dead. For more information, call 816-561-6322.

It’s May Day, so don’t forget to leave a treat on somebody’s doorstep. Just don’t make it one of those flaming bags of excrement — but if you do, you didn’t get the idea here. Moving along: Today might be a good day to pay attention to the restlessness brought on by the end of the winter doldrums and pay attention to spring’s tugging at those love handles. YogaMotion begins its summer classes today. All courses meet twice weekly, and you can start with the tadpoles (beginners) or jump right in with the Stretch Armstrongs. Classes meet at Unity Church of Overland Park, 103rd & Antioch. The cost for 24 sessions is $216. For more information, call 913-381-1984.

Jonathan Larson, who wrote the music, lyrics, and book for Rent, died unexpectedly in 1996 — the night before the show’s first off-Broadway performance. Since that time Rent (based on Puccini’s La Boheme), a rock opera about being young, broke, and hopeful in New York City, has escalated right along with the cost of living. The Los Angeles Times says, “Rent is sensational! With a huge heart and a couple of ideas about young people finding connection in a disconnected time, this musical explodes with life.” In 1996, it received a Tony for Best Musical as well as the Pulitzer Prize. Performances begin today through Friday at 8 p.m., Saturday at 2 and 8 p.m., and Sunday at 2 and 7 p.m. Tickets are priced from $32.50 to $43.50. For more information, call 816-931-3330.

If you don’t know who Ani Difranco is, you’re walking in restricted circles. But maybe that’s okay, because she’s probably tired as hell as being referred to as “one righteous babe” or as “the woman who owns her own record label.” In the past decade, Difranco has gone from being in coffeeshop obscurity and playing in sweaty dive bars to playing at the world’s most renowned venues. This leading lady has created a legacy that’s either going to keep moving Up Up Up Up Up Up (that’s the title of her 12th CD) or fall back into the obscurity from whence it came. The consensus seems to be that she’ll never stop, but she could pull an Eddie and the Cruisers move — you just never know. As she sings on her album To The Teeth, Life in the circus ain’t easy/But the folks on the outside don’t know/The tent goes up and the tent comes down/And all that they see is the show, maybe she’s giving us all a hint. Nonetheless, wherever this icon goes, those who see her live shows generally don’t forget them. Her free association digressions and songwriting and

-playing intensity collude to create a show that the greater Kansas City Ani Difranco legion will be talking about until she comes around again. Difranco will be at the Uptown Theater tonight at 7. She’ll be joined by Jim White. Watch the line snake around the Uptown starting around 3 p.m. Tickets are $25. For more information, call 816-931-3330.