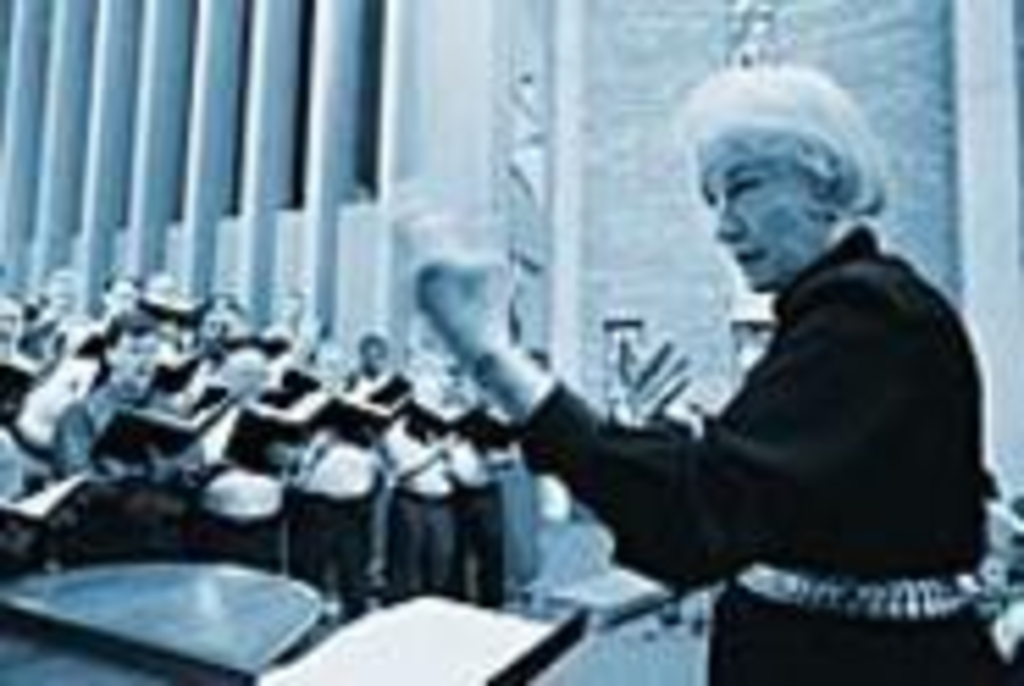 They’re calling it “a genuine festival of the arts.” It’s The Smoky Hill River Valley Festival, and it runs today through Sunday at Oakdale Park in good ol’ Salina, Kan. In its 24th year, the festival spans the artistic spectrum with two juried shows, a fine arts show, a craft show, and demonstrations. But that isn’t all: The festival promises to deliver a multifaceted blend of talent with four stages of live music, as well as the First Class Five Run and River Ramble Walk, the Festival Bicycle Race, the Big Band Dance, sand sculpture, River Bank Mural, and much, much more. It seems as though the Smoky Hill River Valley Festival really does have it all. Festival buttons may be purchased throughout the big bad town of Salina for $5 in advance or $7 at the gate. For more information, call the Salina Arts and Humanities Commission at 785-826-7410.

It might not be as tasty as the mix of chocolate and peanut butter, but the Jayne Gallery is mixing up a little acrylic on canvas and sculpture for your artistic palate. Tonight from 6 to 8, Jayne will host the opening reception of New Works by Alicia Quaini and Allen Wynn. Quaini was born in Buenos Aires and was considered somewhat of prodigy when she began painting as a child. Since then she has developed a career as an artist using bold shapes and fruits laden with symbolism to paint her take on the meaning of life. Truly an artist who doesn’t know boundaries, Quaini is also a singer, songwriter, musician, conductor, and scenographer. Louisianan Wynn’s sculptures have been viewed nationwide and are known for their either really large or really small proportions. His sculptures, usually women, represent the working people he has met throughout his life. View both artists’ work at 4540 Main. For more information, call 816-561-5333.

Today from 10 a.m. to 1 p.m. the Stamper Photographic Gallery is open, and since it’s open only two days a week, it’s a good day to check out Jazz Memories, portraits of jazz legends by Herman Leonard. In the late ’40s Leonard began as an apprentice under famous photographer Yousuf Karsh. Leonard photographed Albert Einstein, Harry Truman, and Dwight Eisenhower. But it wasn’t until he combined his love of the camera with his love of jazz that things really started happening for him. After shooting promotional shots at nightclub rehearsals, he earned front-row seats to performances by the finest musicians of the time: Duke Ellington, Charlie Parker, Dizzy Gillespie, Thelonious Monk, Billie Holiday, Sarah Vaughan, Nat “King” Cole, and countless others. See these telling pictures, which capture the feel for the New York nightclubs during the late ’40s and ’50s at 1521 Grand. For more information, call 816-471-1122.

Musical bars and prison bars go shackled hand in hand at the Lansing State Correctional Facility, and why not? Inmates can be in tune. Under the direction of Dr. Elvera Voth, the East Hill Singers men’s chorus will have your ears in lockdown with America the Beautiful, a concert exploring America’s heritage — both the secular and spiritual side of things. Voth is a nationally known choral director who has worked with the East Hill boys in stripes for six years, and they will give a free concert today at 4 p.m. at the Village Presbyterian Church, 6641 Mission Road in Prairie Village, Kan. The Meaning of Life, a photo exhibit of men and women serving life sentences will be on display at the concert. For more information, call the Arts in Prison office at 913-484-5492.

Given today’s cynical climate, it’s difficult for obscure bands to draw a crowd on any night, let alone two closely packed dates. But Austin’s Stickpony is going about its tough task the right way, offering fans variety (today’s show at Fred P. Ott’s on the Plaza is an all-out rocker, while Tuesday, June 13’s show at Davey’s Uptown, 3402 Main, is an acoustic showcase) as well as quality (the group plays tight roots-rock in the vein of Uncle Tupelo). Help a fledgling group out by attending one of these concerts, and when they become the next Wilco you’ll be able to say you saw them way back when. For more information, call 816-753-1909.12 Monday

If you’ve been looking for the next best thing to the Glenn Miller Band, Bill Baker’s Band has what you’ve been looking for. Baker and his band are coming clear from Holland to make sure people across the country get a chance to relive the Glenn Miller Big Band Sound. Tonight from 7 to 10 put on your dancing and swinging shoes (swing-period clothing is always welcome) and enjoy sounds from way back in the day when flipping women over your back and between your legs was just part of going out and not grounds for incarceration. The event takes place at the University of Missouri-Kansas City’s Pierson Hall at 50th and Rockhill. Tickets are $18 and include complimentary refreshments. For more information, call 816-333-9841.

Those who are perpetually tardy for rock shows — specifically the recent Type O Negative, Danzig, and Rollins Band concerts — might have been disappointed to arrive at the venues to the sound of fans buzzing about the unknown openers’ surprising showings. Luckily for these slackers, tonight’s bill at The Bottleneck (737 New Hampshire in Lawrence) features all three of these up-and-coming acts: The Deadlights, Disturbed, and Apartment 26. These bands offer three different but equally convincing definitions of heaviness, so come prepared for a rowdy crowd and remember: Doors open at 8, so don’t be late. For more information, call 785-841-LIVE.

What better time to listen to the beautiful and mellow sound of the cello’s four-string somberness than during the balmy month of June? The University of Missouri-Kansas City Conservatory of Music is hosting five cello concerts this month. Tonight at 7, Daniel Saenz will caress the cello while Edward Lawrence persuades the piano to follow along as the two perform Beethoven’s “Variations in E-flat,” De Falla’s “Suite Populaire,” and Poulenc’s “Sonata for Cello and Piano” — a fitting piece indeed. The performance takes place at UMKC’s White Hall at 4949 Cherry St. Admission is free. For more information, call 816-235-2799.

When you see a sign that says MS UGLY Bartender Challenge, you might be offended, thinking that there is actually a contest searching for the ugliest female bartender in Kansas City. But it in reality it stands for the Multiple Sclerosis Understanding Generous Loveable You Bartender Challenge. Now it’s understandable that they shortened it to UGLY, isn’t it? The Hurricane at 4048 Broadway will be a part of the challenge tonight, donating $4 of each $5 cover charge to the National Multiple Sclerosis Society Mid America Chapter. Those who attend will enjoy a night of ’80s music while knowing they helped a good cause. For more information, call 913-432-3926.

Did you know that Kansas City is scheduled to be the home of rock’s revival? According to MTV, that is. Those who long lamented the absence of Headbanger’s Ball are well aware that the station has started airing Return of the Rock, a daily show devoted to hard-hitting acts new and old. However, the album and tour accompanying the show focus on fresh faces, with the grunge/metal outfit Staind, led by the stellar vocals of Aaron Lewis, headlining an otherwise rap/metal-filled bill that includes P.O.D., Crazy Town, and Dope. The Beaumont Club (4050 Pennsylvania) is the tour’s first stop, so concertgoers should keep their ticket stubs as a reminder of the night they bore witness to rock’s rebirth. For more information, call 816-561-2668.