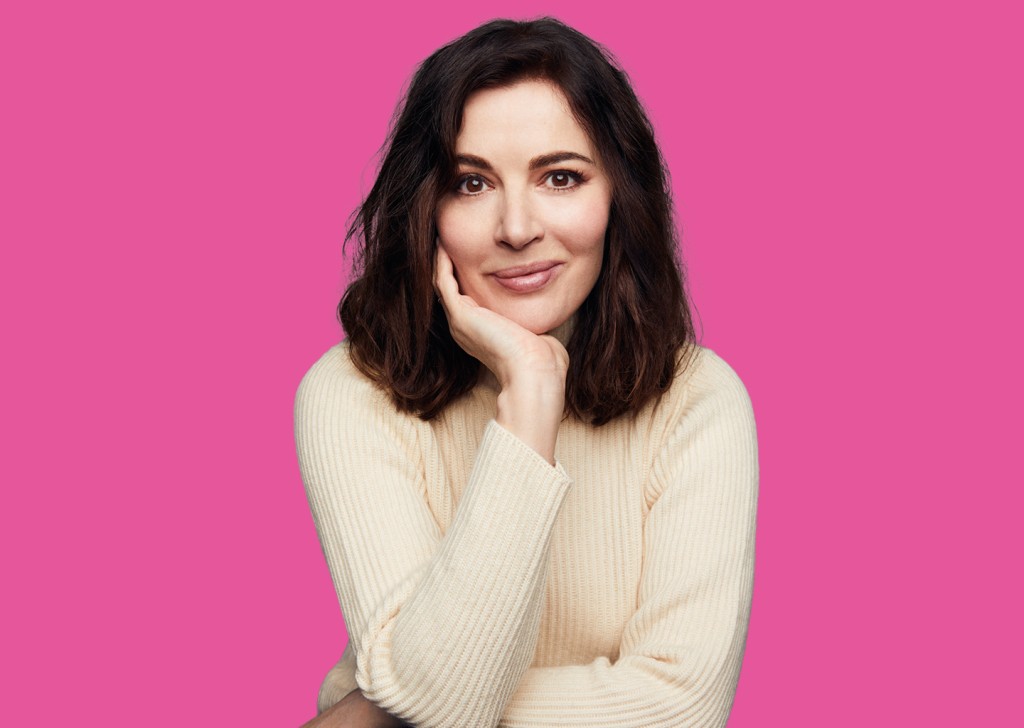 With upwards of 9 million ravenous social media followers, it’s no wonder British cooking mogul Nigella Lawson is known as the queen of the kitchen. Over the past two decades, Lawson has single-handedly created a culinary empire thanks to her wildly popular cookbooks and string of imminently watchable cooking shows.

Call her what you will, but do not call this food enthusiast/food critic/foodie femme fatale a celebrity chef. She’s not a fan of the term—or so I’ve gleaned from other recent articles. (Mercifully, I didn’t fall victim to the misnomer during our recent Zoom interview.)

Little did I know that during our 20-minute chat I’d need a British to English dictionary handy. She peppered in so many quirky adjectives—Nigella-isms, if you will—that I had to ask her several times to repeat herself, so I made sure I heard her correctly.

The internationally renowned food writer brings her quippy culinary candor to JCCC’s Yardley Hall on November 19. Think of it as the ultimate Q&A with Lawson as she recounts the people, food, and recipes that have shaped her unique career and life.

Speaking of Q & A’s, we asked Pitch readers to submit a bevy of questions for Lawson, who seemed intrigued not to be answering a complete smattering of food questions. (Of course, we snuck a few in anyway.)

The Pitch: Hi, Nigella. My dear—I’m so sorry about the Queen. Are you okay?

Understood. Okay, get ready, Nigella. I have a lot of questions from our readers. Are you ready?

That’s exciting. I’m ready. Do I have to roll my sleeves up?

Is there a particular dish you hate to prepare, but you love to eat it when someone else is cooking?

That’s quite difficult. I think a lot of the time—and I wouldn’t say I hate to prepare—but I do love deep fried food and fear I’m not quite up to it. I have an open kitchen, so I have to be prepared to make the whole house smell of deep fried. But when I’m in the right mood, it’s great. I will certainly bring the deep fryer out when my kids are here. If they want a fried chicken sandwich, I’ll serve it proper homemade. I love eating deep fried things.

And Japanese food I love, too. It’s lovely to have made because often what happens—it’s not that it’s a pain to prepare—but it’s stocking ingredients for it.

I don’t like complicated food anyway, so I don’t look for that when I go out—even if someone else is cooking. If it’s a good restaurant—maybe an old-fashioned Italian dish—like, tortellini in broth. They can make a fantastic broth because they’ve got those big pans and the bones for much more meat, which can give it intense flavor. Sometimes, simple dishes might need ingredients you don’t always have. And with good homemade tortellini, I’m not enormously dexterous. As much as I love making pasta, making all those little babies, I might lose patience before I get to the end.

If there’s a party celebrating your cooking and the signature drink was called The Nigella, what would it contain?

Well, I like bitterness. Not in life. But I love bitterness in food and drinks. It might have to involve Campari. I like a Campari soda, not with orange which is the classic, but with a little sprig or two of thyme. That’s my favorite. But not everyone would be ecstatic about perhaps being given a Campari.

Another drink I love—especially at a party? Sweet, fizzy wine. For one bottle of sweet fizzy wine, you need the juice of four to five limes. Taste it after four to see whether you want it sharper or not. And it’s heavenly. So wonderful and so easy to make. I’d be very happy to be represented by that as well.

Name a kitchen tool you cannot live without, dear.

I’ll do three. Always, if I go anywhere, I have to take a fine microplane grater. It’s got a broader plate rather than that long, thin one that’s harder to wash up. I use it for garlic. Of course, I may slice my hand occasionally, but I think it’s better than a garlic mincer. I use it for garlic, lemon zest, ginger, anything.

Also, I like a mezzaluna, which I think you call an herb chopper. Everyone thinks it looks really professional, but, in fact, I’m a clumsy person—and if you’ve got that half-moon knife with both handles you can’t cut yourself. And you can get things as fine as you want!

And the last thing? There aren’t that many jobs in the kitchen I hate, but I don’t like peeling garlic. And I have this bit of plastic tubing and you put a garlic clove in and rub it against a kitchen surface with your hand and the skin comes off. I don’t know what it’s actually called. I love it, but you mustn’t get your hands wet because it doesn’t seem to work and gets stuck somewhere. It’s really great.

I’m going on Amazon right now! Okay, from another reader, what comfort foods did you turn to during the pandemic?

Oh, God—for the first two weeks I could eat any carbohydrate. I ate bread. Bread and butter—comfort food, par excellence! So, bread, pasta, rice, baked potatoes, and chocolate. And then after two weeks I thought, ‘Lawson, get a hold of yourself!’

After that I made whatever I wanted to eat, meals for myself in the evening. I was eating on the hoof during the day because I was writing—and I was writing about food. I needed food to keep me going, but you can’t have too much because you need to have that edge when describing food. If you’re full up, you can’t do it. So, my evening meals were a bit of a ceremony, candles and all. But I’m such a fast eater, I swear I’m at the table for about five minutes and I’ve eaten everything.

What’s your best Halloween costume ever?

I’m so ancient we didn’t do much for Halloween when I was a child. I’m afraid to say, I think the trouble with costumes is that it’s great for two minutes and then you think, ‘Alright, I’m at a party. Why did I come as a cardboard box?’ This is not how I want to spend the rest of my evening. So, I think you have to go with something glamorous.

My quick answer is Angelica Huston (in The Addams Family). I love a wig and even though I have long dark hair, I have got a wig that looks just like that. Add a sour expression and pale make-up and the rest. I’ve got a rather good dress which looks like something she wore that I found in a thrift store. And it’s vintage with long sleeves and feathers on the end. Sometimes I take broomsticks even though that wasn’t part of her look. I don’t mind accessorizing, but I try to keep the look not too much of a joke, so I don’t regret it an hour and half in.

What is your go-to meal to take to a friend in a time of need? Like, death, baby, celebration, etc.

For babies or bereavements—lasagna. I’ve got a recipe in Cook, Eat, Repeat and also on my website called ‘Lasagna of Love.’ You just have to accept that it’s a labor of love. And a lasagna is just so comforting. And you know it’s taken a while, it’s a process. It’s a good thing to take to people because they can make a portion and eat as they need. Put some in the refrigerator and some in the freezer for later. Lasagna just says I’m looking after you and I want you to be happy.

Are you excited to visit Kansas City? What do you have up your sleeve?

I’m so excited. I love Kansas City. I’ve been there before. I adored it—and everyone’s warmth. The big sky, the atmosphere of the place. It’s always nice to come and talk and have people ask questions. What I love about doing these kinds of events is that what gets spoken about is largely determined by the audience because the second half is questions from the audience and what they ask.

That’s what makes it so particular. Every single event has its own character because it depends on who comes that night. It feels very alive and spontaneous—which reminds me a bit of cooking. The person interviewing me will decide what questions to ask, but as you can tell, I witter on, so who knows where I’ll end up. You need to go with the flow, be spontaneous, and react to what’s happening.

When you cook you have to react to the pan in front of you—turn it up, turn it down, add something else. Even when I do my TV series, I’m not scripted. It’s better to speak from instinct and from the heart then give a speech or aperçu done ahead of time. I’m not a performer, I’m an enthusiast. I like having to think on my feet. Or since I’m sitting down, on my bottom.

If you’re sitting down with other people’s cookbooks, what do you love most or perhaps look for?

Oh, I love other people’s cookbooks! One of the great privileges of what I do is that I can write or talk about cookbooks I love and encourage emerging talent both personally and in print. It’s a lovely thing to be able to do.

I like voice—and that voice has to exist in terms of the cooking part of the recipe and the explaining of the recipe. I’m not happy with just a formula. I want to know why and where it’s come from in that person’s life. I need to be taken in to trust the person who’s telling me about their food.

Voice has to be personal. Some have a more lyrical voice, and some are fabulously bossy and brusque. You know soon enough whether it’s real or not. And when I trust a voice, I will cook something I’m not convinced by on the page, because I trust this person. And it nearly always works. Sometimes things sound odd or read strangely.

Mostly I think it’s to feel someone’s sensibility and to understand something about other people’s food. And it’s just another way of having a connection with people.