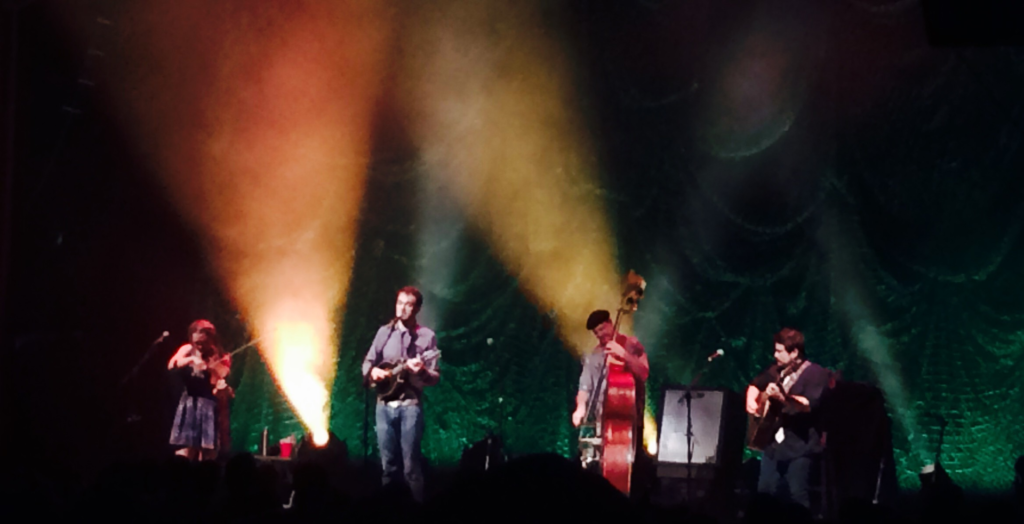 Generally speaking, there are two ways a reunion show can go: Really, really well – where the audience is treated to all the glorious talent it had been dearly missing for a number of years – or flat-out terrible, where the band is clearly in it to make a quick buck and then retreat to separate corners. Thankfully, for the Uptown Theater crowd last night, Nickel Creek chose the former.

“Kansas City, it’s been so long!” mandolinist Chris Thile shouted at the onset of the show. Sara Watkins plugged her fiddle into her amp, smiling brightly, and guitarist Sean Watkins shyly waved. The Grammy Award-winning three-piece was joined on this tour by legendary bluegrass multi-instrumentalist Mark Schatz, who accompanied the group on upright bass.

The 90-minute set opened with “Rest of My Life,” off Nickel Creek’s latest album, A Dotted Line, released this past spring. The roars from the packed house were piercing. “Thanks for coming, y’all!” Thile called out gleefully, as he sank into the mandolin chords of “Scotch and Chocolate.”

Sean Watkins headlined the next song, “This Side,” and the night continued with a balanced hue of tunes sung by each of the core band members. Perhaps the most powerfully emotive song was “Destination,” with Sara Watkins again at the forefront – empowered this time by her vocal strength rather than her fiddle. Such lyrics as I’ve gotta make a destination, find where I’ll be loved, and this time I’ve got no hesitation, I’m already gone demanded the listener to finally realize that Watkins is far from her first days as a precocious fiddle prodigy when this band first got its start. Still, it’s hard to believe that the band is on its 25th anniversary; onstage, the members looked barely old enough to be celebrating 10 years, and the songs on A Dotted Line feel fresh and vibrant.

The trio of bluegrass virtuosos have grown into more refined and confident players since the announcement of the band’s permanent hiatus in 2007. This is an achievement, considering that even seven years ago, nothing was lacking. But the hiatus years allowed for each player to mature through solo success, which seemed to bring them into a more entwined state of mastery. This was abundantly clear last night, as each musician fed off the other’s rhythmic energy. (Check out this live rendition of “Smoothie Song” and you’ll see what I mean.)

The set pressed on as Thile joked about fiddler Watkins singing the right amount of Anthony’s in her ukulele song, “Anthony.” “You may or may not have missed one tonight,” Thile said as Watkins laughed, and the two continued to shuffle between friendly jokes and banter.

Sean Watkins then hysterically reminisced on his need to write his last song, “21st of May,” during the 2011 rapture rumors. “I figured I had to get one more song in before it all went down,” Watkins said with a smirk.

Thile jumped into “Ode to a Butterfly,” and explained that he wrote it quite young, and that while writing, he may have confused the insect in front of him with a moth, and not a butterfly. “I’ve become full of anger over it,” Thile joked. “Let’s all give into our anger, right here at the Uptown Theater in Kansas City,” he continued, and the crowd laughed and cheered along.

The remainder of the set went on like that: more chuckles, more inventive chord structuring, a lot of easy songwriting and happy audience members. Judging by the way things went last night, Nickel Creek might have another 25 years left.

Leftovers: Sean Watkins = adorable version of Patton Oswalt?! I saw it for a split second, I swear.

Also, I’d be remiss not to mention opener Sarah Jarosz – an incredible mandolin talent in her own right (with a Grammy nomination to boot). Her set was far too short, and here’s hoping she’s back in town soon.

Set list:
Rest of My Life
Scotch and Chocolate
This Side
Destination
The Lighthouse’s Tale
Smoothie Song
Reasons Why
21st of May
When in Rome
Anthony
Ode to a Butterfly
You Don’t Know What’s Going On
Somebody More Like You
When You Come Back Down
The Ledge (Fleetwood Mac)
Elephant in the Corn
Jealous of the Moon
Hayloft
The Fox