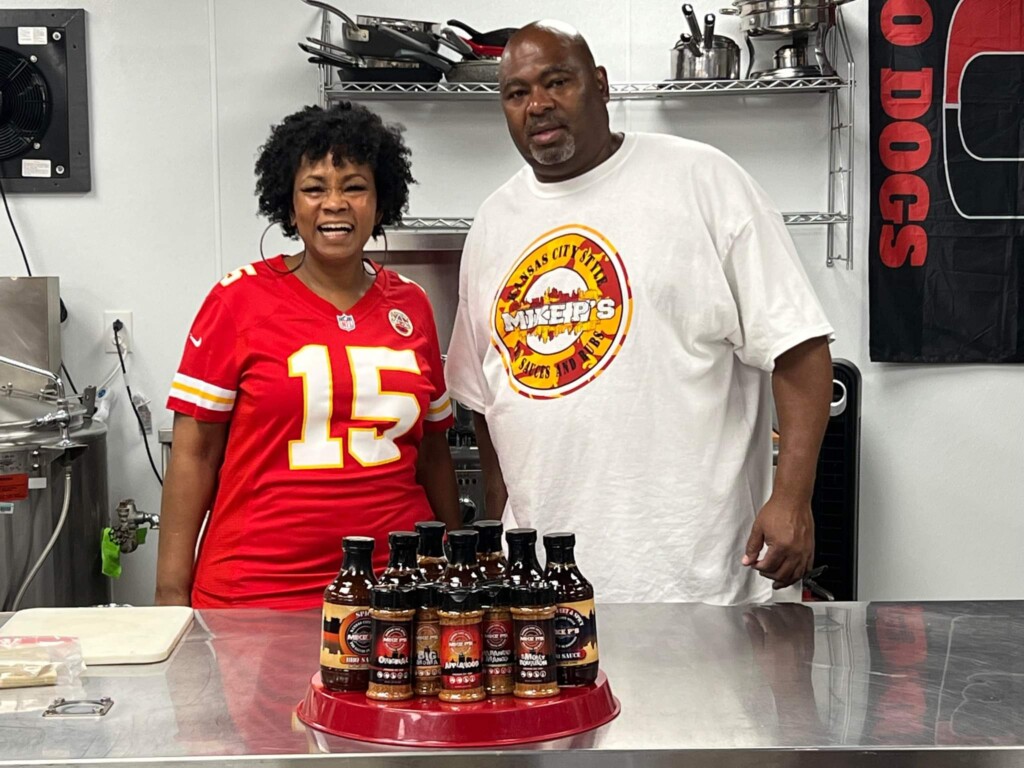 A cooking duo representing each NFL team has three rounds to impress the judges. The winner walks away with free tickets to the game and the highly coveted “Yum-bardi” trophy.

Kansas City natives Shelia Johnson and Mike Powell say they were grateful to be able to compete for their city and their home team.

“Anytime when you get an opportunity to represent the city or the state that you’re from, that’s huge,” Powell says. “They could have picked anybody, and they picked us.”

Mike Powell, better known as Mike P., has been tailgating at Chiefs home and away games for over 15 years. He is known for his line of Mike P’s sauces, dry rubs, and seasonings that are sold in Price Choppers, HyVees, and other stores across the country.

Powell was approached to do Tailgate Takedown when the casting agency saw a post about him on Instagram. They asked him to find a teammate and prepare for an interview.

“They told me I had to get a partner,” Powell says. “So I called Shelia.”

Shelia Johnson tailgated with Powell in the past, but it was her on-screen experience, along with her culinary background, that made her the perfect partner.

Johnson produces the cooking show Gangsta Goodies Kitchen on her YouTube channel, where she cooks with change-makers in the KC community. Working with a network like Food Network is an opportunity that she has been aspiring to for years.

“In 2020, I put two brand logos on my vision board. One of them was the Food Network,” Johnson says. “I didn’t know when. I didn’t know how. But I knew that it was going to happen.”

[Editor’s note: The other brand was Oprah Winfrey’s Network. If you’re reading this, you’re way behind on fulfilling Johnson’s 2021 vision board goals.] 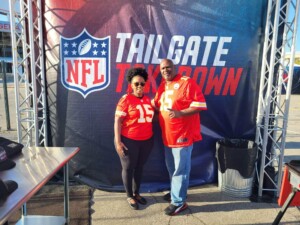 Even with their combined cooking and camera experience, Tailgate Takedown was unlike anything they had seen.

“A section of the parking lot at Arrowhead was turned into a full Food Network set,” Johnson says. “I was just in awe of the fact I was actually competing.”

The duo made collard greens with a spicy peach sauce, mahi mahi tacos with a mango jalapeño coleslaw and a creamy chipotle sauce, and ribeye steak with asparagus and Powell’s “Better than your Momma’s beans.”

Powell and Johnson also incorporated some pineapple-based barbecue sauce in their final dish that wasn’t in the original recipe after judge Eddie Jackson asked for some Kansas City flavor.

“At one point Eddie says, ‘Wait a minute, I thought we were in Kansas City. Where’s the barbecue?’” Johnson says.

Overall, the two were happy with their performance. They can’t say who won, but promise the episode will be “interesting” to watch.

Tune into Food Network on Jan. 18 at 8 p.m. to see if the Chiefs triumphed over the Raiders once again.