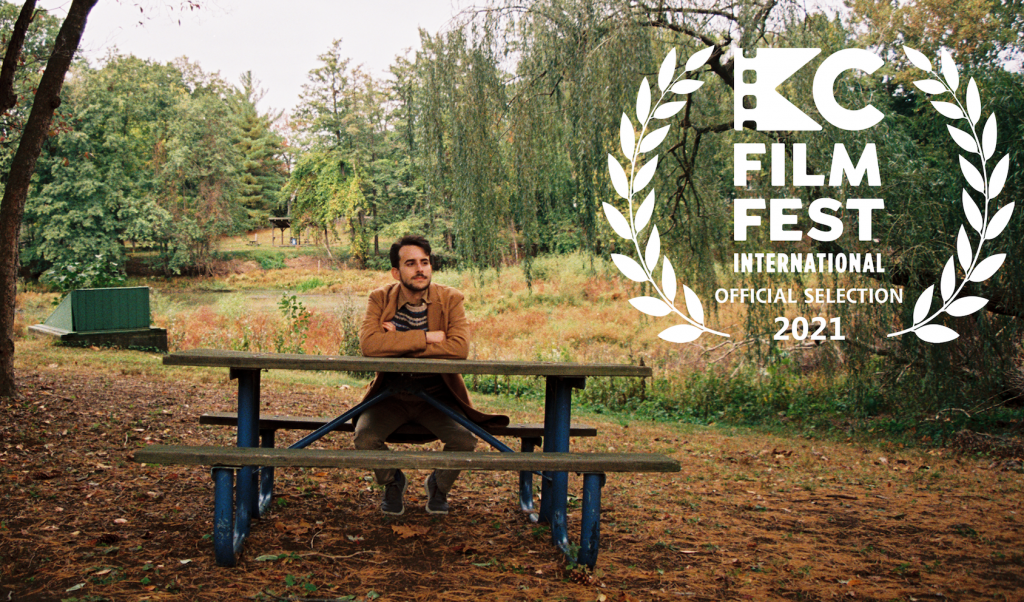 Synonymous With. // Courtesy of Thom Hilton

Synonymous With is currently available to stream via KCFFI’s web site through Sunday, April 18. I spoke with Hilton about the filmmaking process, his genre love and keeping it together filming scenes with a horror icon.

What inspired you to make this film? Do you have a connection to public access horror shows like the one your main character hosts?

I grew up in Portland, Oregon, and we had a public access channel there: channel 11. There was a horror show run out of the state university there and I watched that from when I was about 10 to 12. I was 12 in 2009 when the transition to digital broadcasting happened and many of those shows were canceled, which is why I set my short in 2009. In high school, this wonderful drag performer in Portland started a live screening series called queer horror, and they’re still the local horror host in Portland.

The first movie I watched on that public access show was Gamera, which is kind of like Godzilla’s turtle proxy. They would show stuff that was public domain. I’d watch them so much that my dad got me this big box set of 50 public domain horror movies. I watched all of those, and that’s where all the segments of the show in Synonymous With come from. They’re all from movies that were in the public domain.

What for you is the connection between genre and the queer experience? We see that a little in your film through the character of Mister Synonymous, but I’d love to hear more about how that fits into your own understanding.

Growing up gay, you really identify with those girls. Also they’re usually teased for their sexuality, and that becomes strength for them. That’s a big part of it. The other big part of it that came a little later is when I’d find actual queer characters in movies like Fright Night, where there’s a gay best friend who’s really misunderstood and catty and bitchy, and then becomes a vampire and is super cool and sexy. Those elements of horror movies are really relatable.

Of course Rocky Horror is in there, too. In the thank yous for my film, I mention Darren Stein who directed Jawbreaker. He was big in helping get the word out. Darren Stein used a line from Rocky Horror in Jawbreaker, and I’m influenced by both of those movies. There’s a familial thing where it keeps compounding on itself because there’s such a limited library.

What’s fun about this project is that it didn’t have to be scary outright in the sense that there’s not a horrifying conflict, but it is a genre movie because it’s about a fan who loves this stuff so much, but also the real-life horror of losing the thing that you love to do. Mister Synonymous got to be openly gay and having this great time by himself, and that got taken away. In a horror movie your life gets taken away and you’re dead. In this film, he’s basically dead, too. He’s like a ghost when we meet him.

I know the pandemic played a big part in determining how this film was made. How did you work around it?

It was not supposed to be done the way it was. We were supposed to film this last spring, in Portland, and then COVID happened. We were stuck in New York, and the opportunity just kind of came up where the leaves had changed, and it was Halloween time, so I thought, “I can rewrite the whole thing in a week, we can set it upstate, crowdfund it in three weeks and the go shoot it. I had a tremendous group of people who really showed up for this.

We shot it in October, which was right when things took a turn and COVID started to get worse again. The first weekend we shot outside and we had a nice crew and were safe. Then we shot all the interview stuff, and I had to cut some people for that weekend to be safe. By the last weekend, which was when we shot all the public access show portions, it was just me, and the lead actor, and the hand actor, and that was it. We would change all the sets and lighting and everything, and that was so hard. It covers ten years of time, so each one had this really specific look. But it was so fun to do that together, and it was great that we were able to be safe.

By the time the first cut came out, like most first cuts of movies it was terrible, and we needed something to fix it, but we couldn’t get together because things had gotten so bad. That was where we came up with the format to do phone calls between the interviewer and the main character. So he recorded all his stuff, and I recorded all mine, and edited it together, and I think it turned out for the better.

In addition to your short, you’re also in Swan Song, which has been doing pretty well at festivals. How did you get to be part of that project? What’s it like being on a set with Udo Kier?

That was the luckiest thing that’s ever happened to me. I started working as a guest actor at the School of Visual Arts here in New York where Todd Stephens, the director, is a professor. He told me he was working on the project in 2018. They started crowdfunding for it, and I emailed him and said I’d love to come and just give water to people, be an extra, whatever, and he said “actually I think there’s a part that might work.”

It is a weird part for me, because I play a bartender at this gay bar that Udo’s character built from the ground up. I’m 20, I’m not even old enough to drink in real life, but here I am tending bar. I was also intimidated by Udo because I’m a horror fan, so of course I’m thinking about Suspiria and Mother of Tears and all that, and I’m from Portland, and he’s Gus Van Sant’s guy. So, he’s talking to me about River Phoenix and stuff while we’re filming this scene. He’s also doing this really dry, hilarious improv, and I kind of felt like I was drowning in that scene.

The next day we came back, and there’s a scene where he’s dancing to Robyn’s “Dancing on My Own,” with a chandelier on his head, and everything just kind of melted away, and I was having the most fun of my whole life. I do think when you watch the movie, it’s kind of funny because these two scenes are supposed to be on the same day, and in the first scene I’m awkward, and the second scene I’m having a great time, but it’s fun. I also didn’t know Jennifer Cooldige was in it until I got there, and I’m like “holy shit, what an icon!”

What does it mean to have your film premiere KCFFI?

I think it’s a hard sell of a film. It’s not as explicitly gay in the way that would appeal to an LGBTQ festival, and it’s not scary in the way that would appeal to a horror festival. It’s a highly specific thing. I thought it was a long shot we’d get accepted by KCFFI, since it’s such a nice festival, I feel like this is such an underground thing, but they did, and I thought “that’s so nice, and so unusual!” They’ve been really cool this whole time. I got to meet everyone over Zoom and they’re the sweetest people ever. It does mean a lot, and it’s validating and cool.

I’m not particularly thirsty or trying to climb the ladder with this one. I am purely interested in getting people to watch it, hoping people respond to it, and that gay people and horror fans see it and see themselves. I want people to watch it and respond to it, and I want people in Kansas City to watch it specifically, because I don’t get to watch it with a room full of people. If COVID weren’t happening, I’d be hundreds of people from KC that I’d get to meet and hear their opinions. I’m excited to get reactions from people.