New on the Boulevard 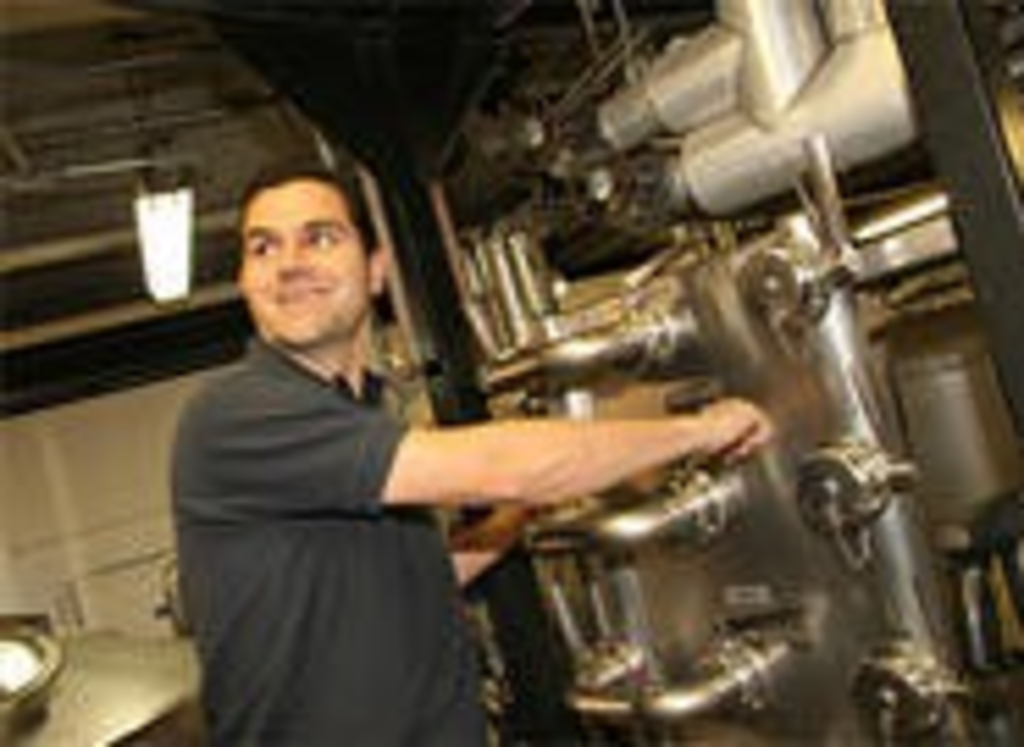 The annual Strong Ale Festival in Parkville December 2 featured more than 20 brews well above the 5 percent alcohol in a watery can of Bud. But it was neither the mind-numbing potency of the beer nor the frigid temperature on the rooftop deck where the event was held that drove the crowd to primitive chants.

It was because small groups of fans began football-style cheers for their favorite beer: the Manimal.

Manimal is reminiscent of strong Belgian ales, with a whopping 10 percent alcohol. And you can consider it a new hometown mascot: The Manimal was hatched by Boulevard Brewing Company.

Though no official awards were given at the festival, Boulevard fared well this year, thanks to a major company overhaul. In August, the brewery opened a $25 million expansion at 25th Street and Southwest Boulevard. The new brewery allowed the company to increase production from 120,000 barrels a year to 700,000.

The expansion also frees up space for more esoteric brews that are produced at the old brewery next door to the new plant. In 2007, Boulevard will flood Kansas City with five new beers. And in March, the company plans to unveil its first wine, a chardonnay with the working name 3030, after the building at 3030 Roanoke that will be used to age it.

The new releases echo the same risk that John McDonald took in 1989 when he founded Boulevard. Back then, McDonald believed the local market was primed for something darker, so he brewed the company’s American Pale Ale. He followed that with Bully Porter and Boulevard Wheat; the latter was nearly dropped altogether, until the company discovered that it tasted much better unfiltered.

These beers now flow from more than 1,300 tap handles across the city and at 65 wholesalers in 11 neighboring states. McDonald has expanded his lineup over the years to include Dry Stout and four seasonal beers, but he hasn’t released a new beer in five years. (The most recent was the summer ale called ZON.)

For his next act, McDonald never considered a light beer.

“Obviously, the world didn’t need another light beer lager at any price,” he says. “It’s like, can you really make a better Busch? I don’t think so.”

So he looked to go darker. Again. The first new release will be something between an English brown ale and a German dunkel weisse. Called Lunar, it will hit stores in April.

After Lunar will come Boulevard’s riskier gambit, four specialty brews: a Saison, a Belgian tripel, an IPA and Manimal. All will be sold in 25.4-ounce, champagne-style bottles. The big beers riff off wine culture: They are meant to be sipped from brandy snifters or wineglasses and improve with age.

“We were already making high-end beer, and now we are going further,” McDonald says. “We have people doing all kinds of crazy things with beer.”

The idea for the new specialty brews has been a long time coming for Boulevard. Seven years ago, McDonald recruited Steven Pauwels from Belgium to become Boulevard’s head brewer. Pauwels held discussion groups and tasting panels with fellow employees to experiment with new recipes. Some of those experiments ended up in the hands of bar owners and Boulevard employees, but none ended up under a beer tap.

“We’ve done a lot of stuff that never made sense to market,” Pauwels says. “I think people have been looking at Boulevard and saying, Hey, guys, it’s been five years. It’s time for something new.”

McDonald’s philosophy is to retrain people to drink beers with intense flavors. “Right now, I think it will be a small segment that drinks these beers, but in the future, I think it will grow. These aren’t going to be for everybody, but they are wonderful if you acquire a taste for them.”

Though he hopes the trend catches on, McDonald expects to make his inaugural run of steep brew less than 1,000 barrels. “That is such a small piece of business right now that I don’t think it’s a real risk,” he says. “And I think just with our track record and everything, people are going to give them a shot.”

Since the expansion, Pauwels and his crew have been working on a series of other secret experiments that might eventually become special-edition releases. He hopes to imbue his beers with taste tones from locally grown produce, such as apples or pecans, or by aging some in Missouri oak barrels. “I’m trying to get as much of Missouri as possible into our beer,” Pauwels says.

The 3030 chardonnay, though, was made with grape juice shipped from Lang & Reed Winery in St. Helena, California. Pauwels searched out top wine-country vintners to talk shop. The first batch is nearly 1,000 gallons.

But the wine will be an aside compared with Boulevard’s new brews. Around happy hour on a recent Friday, Pauwels popped the cork on an unlabeled bottle of Manimal at the brewery. He poured the gingerbread-colored beer into a goblet. He slid the glass toward John Bryan, the brewery’s regional sales manager.

As for the name, Bryan says the beer was such a beast that it named itself.

“It’s sort of a weird story,” Bryan says. “The original working name for it from brewers was Animal because it has so many ingredients in it. That morphed into Manimal.”

Bryan bets that Manimal’s cult name will be extinct by the time it reaches the market, replaced by a more commercially palatable handle. The taste, though, will retain its wild reputation.