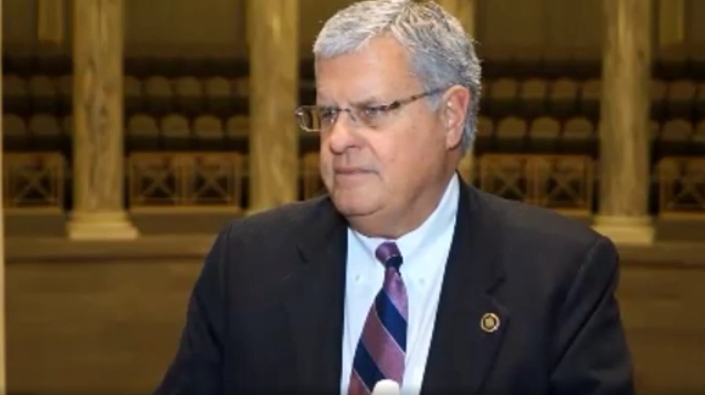 The Missouri Senate leader has been dogged by accusations of pay-for-play politics for months now. As we reported in February, Richard cashed a $100,000 check from the CEO of TAMKO Building Products six days after introducing legislation that would effectively derail a class-action lawsuit against TAMKO. Missouri Rep. Mark Ellebracht (D-Liberty) later wrote in a letter to Richard that the legislation appears to be a “textbook example of pay-to-play politics.” He also called Richard a “crook” on KCUR’s Statehouse Blend podcast.

Even fellow Republicans are uncomfortable with the optics. Ryan Silvey, a senator representing KC’s Northland, suggested a few weeks ago that an investigation of Richard seemed like a reasonable thing to do.

Today, the Campaign for Accountability, a nonprofit watchdog, filed a complaint with the U.S. Attorney in Western Missouri requesting an investigation into Richard’s conduct.

“Sen. Richard can’t expect anyone to believe it’s a coincidence that he introduced a bill that could save TAMKO millions and received $100,000 from the company’s CEO just a few days later,” says Campaign for Accountability executive director Dan Stevens in a release. “This situation begs for a grand jury investigation; it’s a crime for elected officials to accept benefits in exchange for official action.”

Stevens adds: “Missouri residents are on the brink of losing a strong consumer protection law because a businessman who has gotten rich by engaging in exactly the sorts of practices prohibited by the law can now pay off a state senator to get the law killed. It is this sort of cynical pay-to-play activity that undermines Americans’ faith in government.”