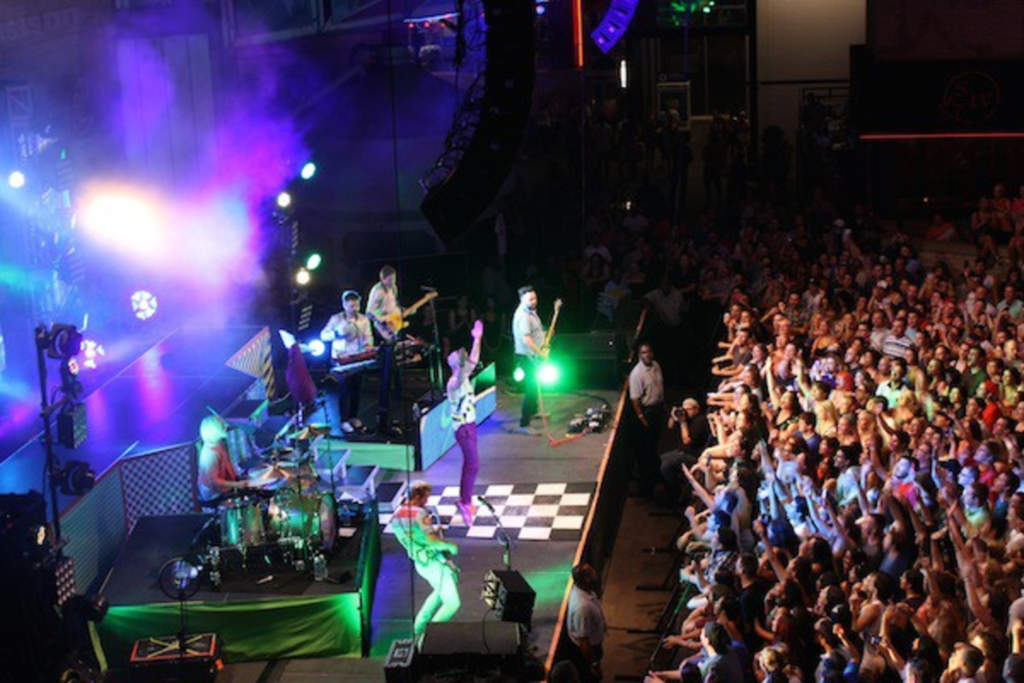 A gigantic white partition covering the front of the stage billowed in the warm breeze as the members of Neon Trees struck up the opening chords of “Lessons in Love (All Day All Night).” At the chorus, the sheet dropped, revealing the six piece pop-rock group best known for the catchy radio hits “Animal” and “Everybody Talks.”

Clad in fuchsia pants, a blazer and sparkly purple Doc Martins with neon pink laces, lead singer Tyler Glenn bounded across the stage in a contagious frenzy of energy. Roaring out songs from the band’s newest album, Pop Psychology, the 30-year-old from Utah busted out Michael Jackson-esque dance moves (complete with toe pops in the previously mentioned sparkly Docs) in between doubling over to deliver powerfully sustained notes. If anything, Glenn is an accomplished singer, able to navigate between the purely harmonic and raspy rock-and-roll.

The crowd joined in song for “Animal.” Likely due to the sheer number of times the radio hit has been played over the airwaves, it seemed that every single person in attendance knew the words. At one point, Glenn ceased singing and simply conducted the audience, forging a playful relationship between spectator and performer. The lights and on-screen graphics were especially funky during the hit, bathing KC Live Block in purples and greens.

Glenn would speak a few words in between almost every song. As a preamble to “Mad Love,” he dedicated the piece to anyone in attendance who was in love that night, elaborating on how love doesn’t have to make sense to anyone else besides the two who are in it. Hinting at a confession later to come, statements like this betrayed Glenn’s probable inner monologue post closet-exiting.

In an interesting twist of events, the drummer took a short quick change to slip into (what else?) a neon dress and join Glenn at the front of the stage for the duration of two songs. While Elaine Bradley has a lovely voice, it seemed to suck the energy out of the band and impose a less excitable pace on Glenn. Harmonies lingered too long and the choreographed movements across the stage favored the more stationary Bradley over hopped up Glenn. It was almost a relief when Bradley returned to her drum set and let Glenn run the show. 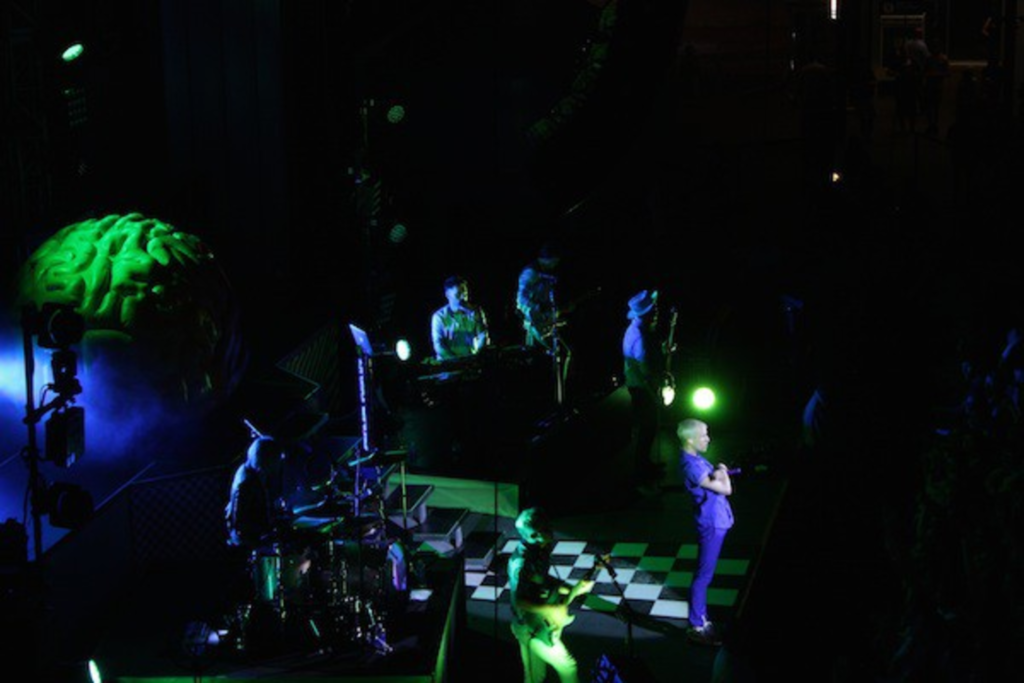 After an especially painful cover of “Don’t You Want Me,” where the entire P&L crowd thundered the corny, repetitive lyrics – undoubtedly throwing back to their shoulder pad and parachute pant-wearing days – Glenn came out to the audience. It seemed especially opportune for KC last night, as the Marriott Hotel also wore a glittering neon rainbow design on its front to support gay pride in KC (Glenn, who recently declared his wholehearted gayness, capitalized on this moment). The audience burst out in applause.

With that out of the way, Neon Trees played four more songs. Glenn changed into yet another pair of sparkly Doc Martins, this time solid gold. More toe popping ensued. A giant inflatable brain was placed on the stage for a cover of the Pixie’s “Where is My Mind.” Clever, if not overly literal. More funky lights (did they only pay the light guy to design the radio hits?) for “Everybody Talks.”

Neon Trees closed with “First Things First,” a song that informed the crowd: you are never gonna get everything you want in this world/first things first get what you deserve. It’s hard to say if the KC Live Block audience members deserved the moderately average sound delivered last night, but they supported the band well before most likely returning to the district’s moderately average bars to continue the night.