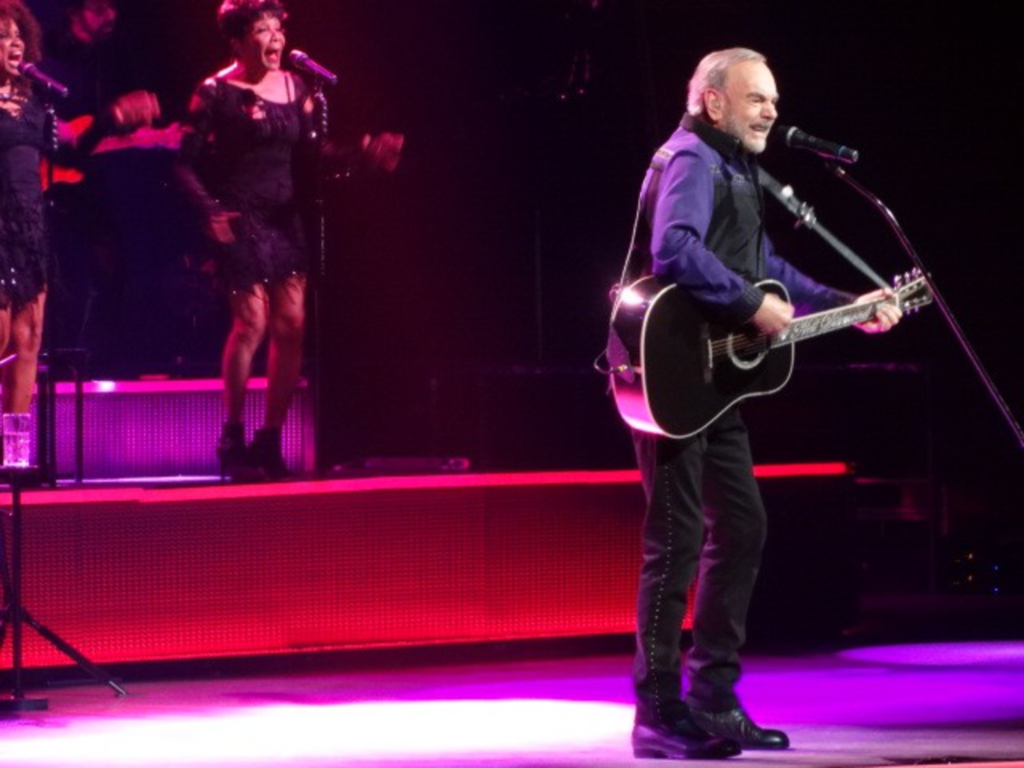 It’s easy to forget that there was a time, not that long ago, when Neil Diamond was pretty passé – a time when “Sweet Caroline” wasn’t part of every major league ballpark experience. After Diamond’s first few waves of popularity (AM pop hits, iconic ‘70s status), his career got a little stuck. A wriggle here and he could have been Tom Jones, a wrinkle there and he could have been Barry Manilow. A few altered management decisions, and he has his own theater in Branson. (All of which would have been fine, but still.)

Diamond is standing where he is now in part because a whole generation surreptitiously crept into its parents’ record collections and emerged thinking, “This guy’s great.” Even more importantly, along the way, those collection-sneakers gathered the courage to admit they were fans – no irony, no qualifiers. Just fans.

Last night, Diamond played to all those fans, no matter which decade they came from. From the moment he hit the stage with “I’m A Believer,” Diamond went retrospective, but the show never got bogged down in nostalgia. With a huge band behind him – a full horn section, two guitarists, two keyboardists, a drummer and a conga player – Diamond worked the stage with arms wide open, with a nod, a wink or thumbs up for every corner of the place. He has the gift of making each person in an arena feel as if he’s singing just to them. 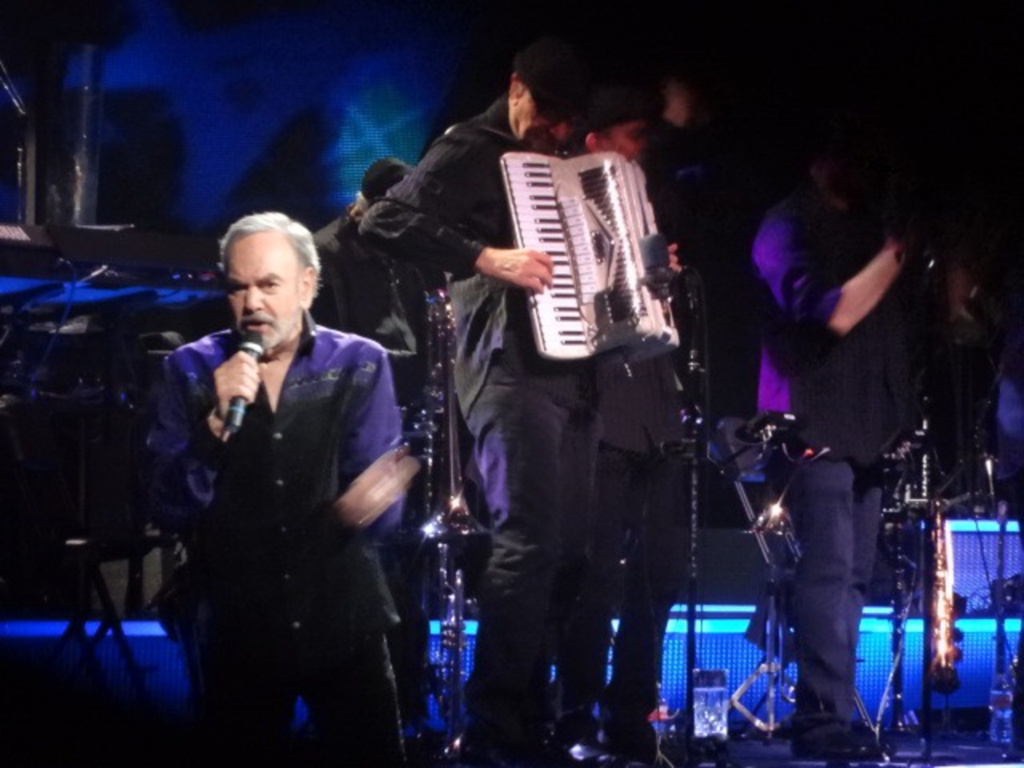 After a promise to come back to Kansas City this year to sing the national anthem for the first game of a Royals World Series (the man knows his craft), Diamond launched into some deeper cuts – a Latin-tinged “Pretty Amazing Grace,” “You Got To Me,” and “Girl, You’ll Be A Woman Soon.”

One lucky fan was pulled from the front row as Diamond went fully for a fawning smooch during the already gooey “Play Me.” This was followed with “Red Red Wine,” and Diamond even broke for a UB40-acknowledging rap in the middle: Even though they get the words wrong/I don’t care ‘cause they’re singing my song. 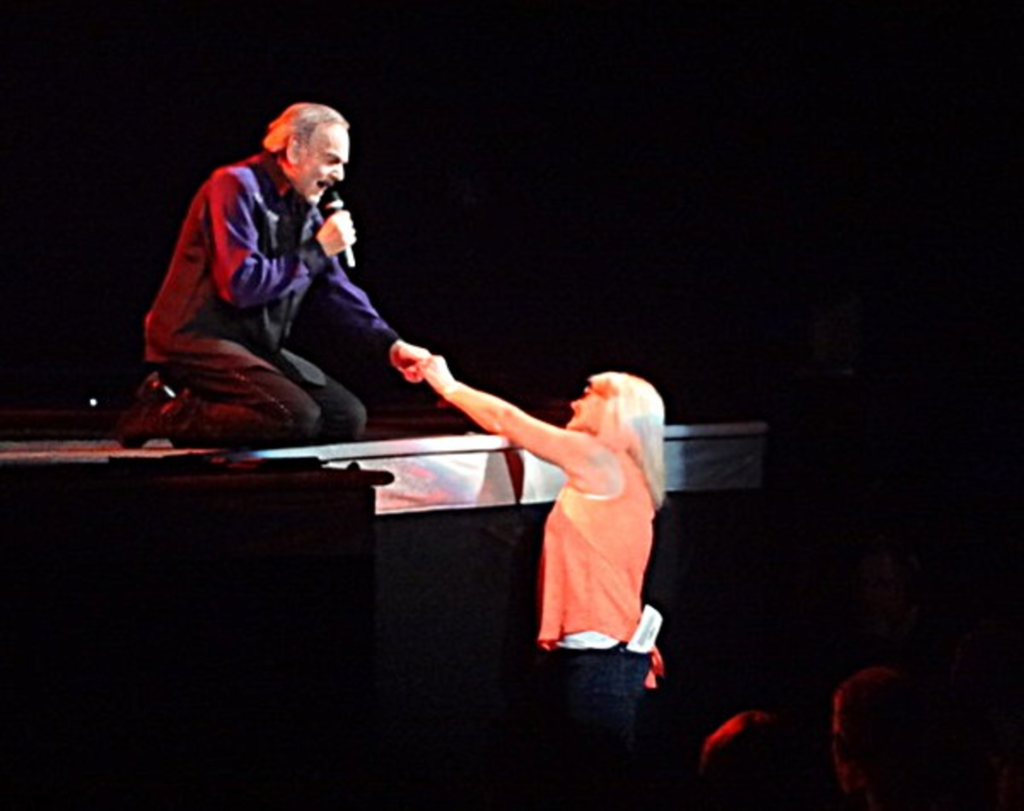 Following an epic “If You Know What I Mean,” Diamond told a few stories about his own family and drifted into “Brooklyn Roads.” As he reminisced, the diamond-shaped screen behind the band played old 8mm home movie clips taken mostly by his father. There were important revelations: His mother was gorgeous, his father looked more than a little like William Powell (with that same skinny swoop mustache), and while he was a cute kid, Diamond’s eyebrows were every bit as prodigious when he was young.

Diamond sang a few songs from his latest, Melody Road, and he stuck with songs of his fairly recent marriage to his current wife, starting with the soaring “Nothing But A Heartache,” a power-chord accompanied ballad that took him from the nightmarish heartbreak of one relationship to the forever love of his marriage. This was followed by “The Art of Love,” a gentle song preceded with an apology to his wife and the claim that he didn’t really kiss that pretty girl. (Oh, we saw, Neil… We saw.) 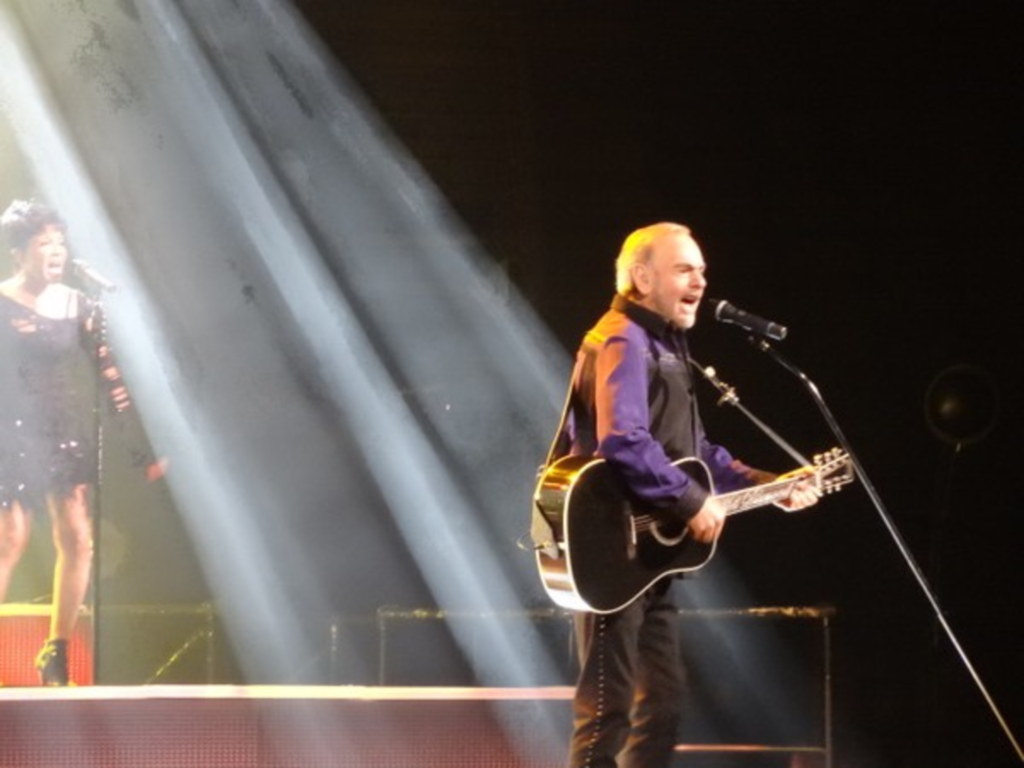 But those miss the point. As Diamond pushed into the ‘60s drive of “Cherry Cherry,” the mournful (and admittedly lonely) fable of “Morningside,” and the monumental (and also lonely) set-closing build of “I Am…I Said,” there was something that spoke to every person there. 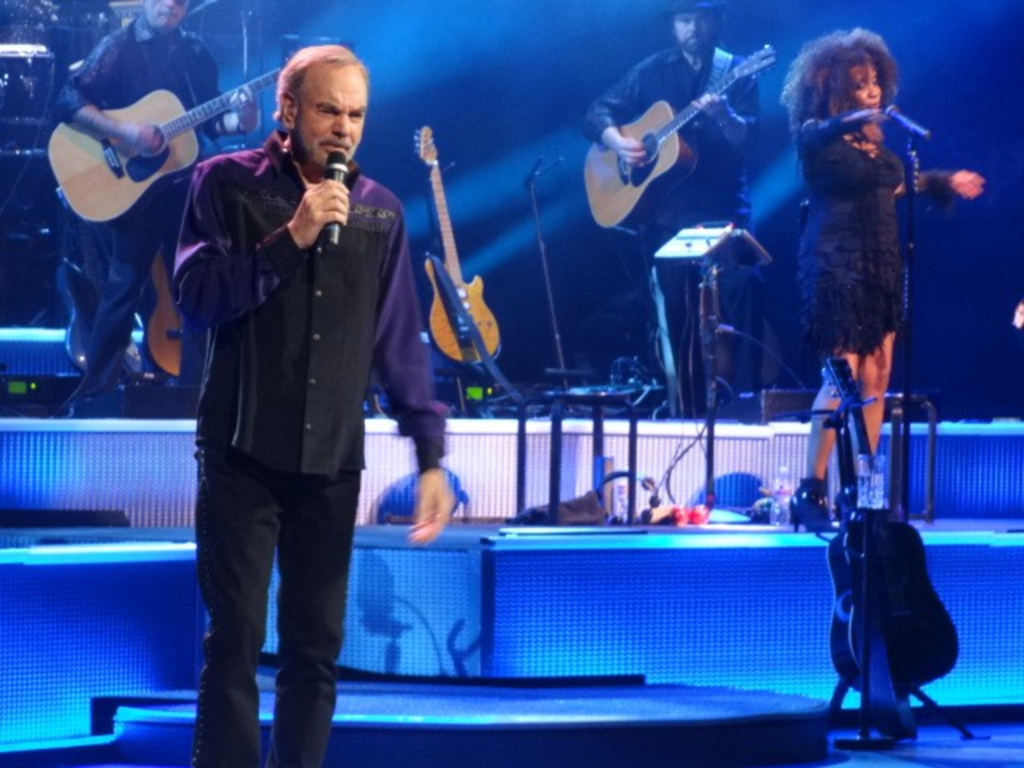 For the finale, Diamond led a singalong of “Sweet Caroline” (of course) and went briefly and genuinely patriotic for a huge version of “America,” (with film clips emphasizing Ellis Island and our nation of immigrants). Diamond left the stage blowing kisses during “Heartlight,” and even the band spent several minutes waving goodbye. It was like watching a favorite uncle drive away, and that pretty much was the point.

Leftovers: Okay, so he didn’t play “Brother Love’s Traveling Salvation Show,” but Diamond’s 1969 encouragement to Pack up the babies and grab the old ladies and everyone go has become prophetic. The relatively new tradition of bringing kids to see iconic performers (Bruce Springsteen, Carole King, Elton John) is by now pretty standard, but Baby Boomers have clearly added a new layer – taking their own parents to shows. There were a few kids at this one, but there were a lot of middle-aged kids carefully guiding their folks to expensive seats on the floor. Those inter-generational moments added a whole new layer of genuine sweetness to the show.

I’m a Believer
Love on the Rocks
Hello Again
Pretty Amazing Grace
You Got To Me
Girl, You’ll Be A Woman Soon
Play Me
Red, Red Wine
Beautiful Noise
If You Know What I Mean
Brooklyn Roads
Shilo
Nothing But A Heartache
The Art of Love
Forever in Blue Jeans
Cherry Cherry
Morningside
Holly Holy
I Am I Said
—-
Cracklin’ Rosie
Sweet Caroline
America
Heartlight