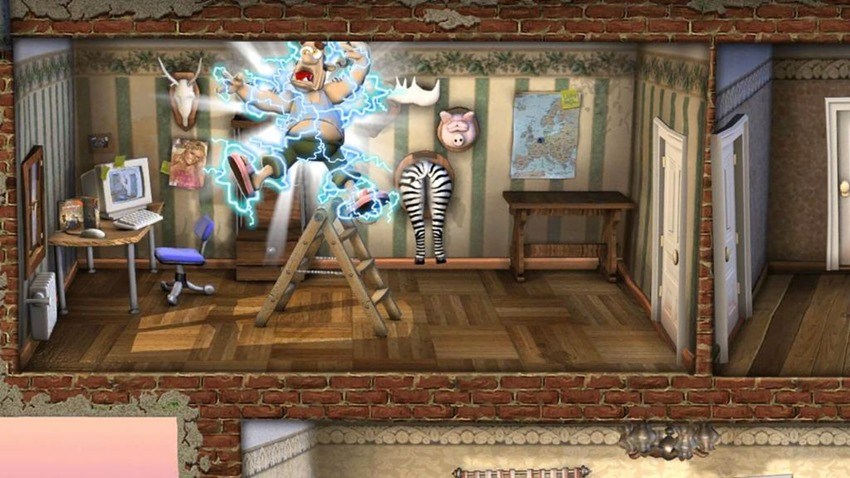 In 2003, there was a version of Neighbors From Hell on nearly every video game platform. Very much a product of the time, it was a claymation-influenced 2D puzzle game based on the hysterical hijinks of unwarranted cruelty. You play as a dude who is annoyed by his neighbors, so you enlist a reality TV crew to film you while you extract all forms of revenge upon them. Yeah, it’s about as 2003 as a concept can be.

That’s why it’s shockingly odd to see the title rear its head again in 2020.

Remastering games to bring them to new platforms and update the visuals is super “in” these days. One of my favorite surprise remasters this year is a Spongebob Squarepants game from nearly a decade ago. Why? The speedrunning community got really into it, it’s a surprisingly delightful game, I dunno why I would have paid attention otherwise. Now I’ve got the weird barnacle adventure game on two platforms. So pulling stuff from the past and making it new again absolutely works, especially on me.

So why pull Neighbors From Hell (and its sequel) kicking and screaming into 2020?

I have no great answer here, but I equally have no complaints.

The basic gameplay of both original titles, now repackaged as Neighbors Back From Hell, remains the same. And the visuals are in no way reimagined, simply made crisper. The experience of trying to figure out how to Rude-Goldberg your way into ruining your neighbor’s entire life is equally rewarding and cartoonish as it always was. So perhaps there’s just a question of context. Why does 2020 need a game about torturing your neighbors into madness? Perhaps it arrived at just the right time to get out your frustration with watching some of the people around you make the choice to be ass-hats. Maybe it’s a good outlet for having been stuck in close proximity with neighbors in a way you hadn’t been before—as to become wholly frustrated by the minutiae of their behavior? Or maybe in a year where one of our best releases of comedic energy is a sequel to Borat, a Jackass inspired romp is just what we need to decompress?

A fun throw-back. An odd surprise. No complaints about some bonus schadenfreude.

Best of KC 2020: Our gaming stores stay relevant during a plague