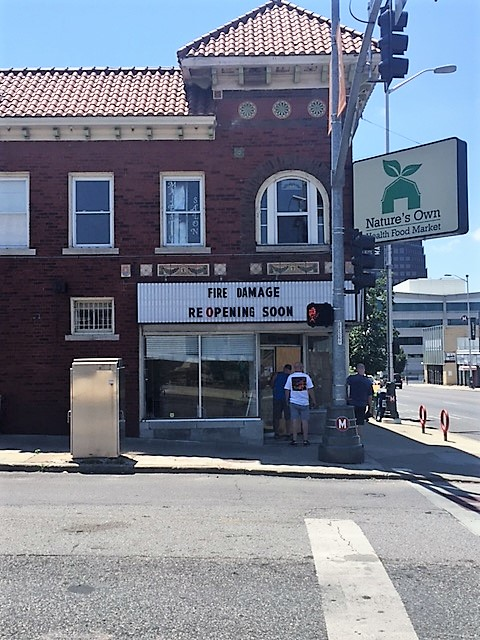 In April, a fire tore through several buildings at the southeast corner of 43rd Street and Main Street. One of the damaged structures housed Nature’s Own. For years, the location has functioned as a pseudo-corner-store for Kansas City Art Institute students and Southmoreland residents as well as a citywide destination for people who are very serious about Kashi and kombucha.

For a time, it looked like the store would reopen at the same location. The store’s beloved marquee (pictured) even still proclaims as much.

But last week, Nature’s Own announced that it would be moving to the other side of midtown. It has leased the space formerly occupied by RecordBar, at 1020 Westport Road, and plans to reopen there this fall.

That’s good news if you live in, say, the Volker neighborhood. But it’s particularly bad news for Southmoreland residents. In January, two other grocery stores in the neighborhood — the Apple Market at Forest Avenue and Emanuel Cleaver II Boulevard, and the Thriftway at 3967 Main — also closed.

“I think everybody understands the need for a grocery store in that area,” Burnett said.

The lease price at the old Thriftway — the owner is asking roughly $11,000 a month — may be cost-prohibitive for a grocery store, though. As former Thriftway owner Tony Hassanzadeh told us in March:

“The grocery market has changed so much, and the profit margins have gotten so small, that a smaller neighborhood place like ours can’t compete on prices with a 50,000-square-foot grocery store. You have to do so much business just to pay the bills, and the numbers don’t work on a smaller scale like the Thriftway.”

Nature’s Own apparently came to a similar conclusion.

“Thriftway was the first place we looked into after the fire,” the store posted in reply to a commenter on its Facebook page. “Unfortunately, it’s just too big for what we need, and way too much money.”

Greg Patterson is the broker for both the new Nature’s Own space in the Old Westport Shopping Center and the former Thriftway on Main.

“Their [Nature’s Own’s] new location is going to be great for them, I think,” Patterson says. “It’s about 5,000 square feet if you include the basement, and it’s got a great parking lot for customers.”

What about the old Thriftway space?

“We have a prospect lined up that we’re really excited about, but I can’t comment on who it is yet,” Patterson says.

As for the corner of 43rd and Main, Del Hedgepath, owner of that property, says it will be awhile before anything new opens in the former Nature’s Own space.

“There is not a new tenant lined up,” Hedgepath says. “It was a total-loss fire and will take 12 months to rebuild it.”