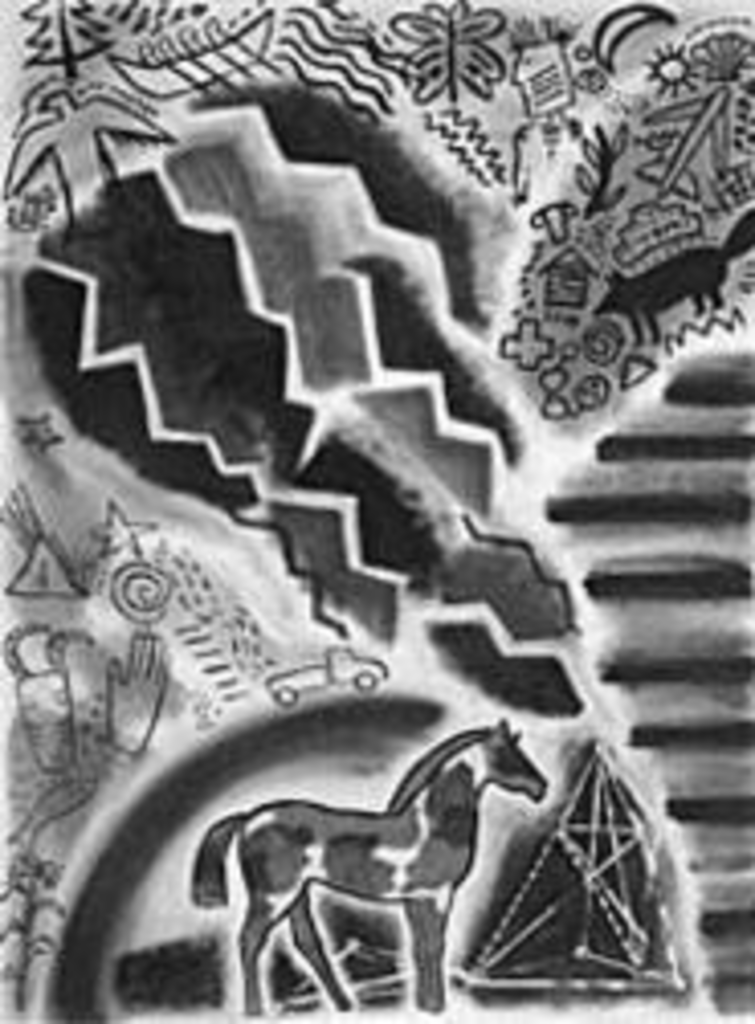 Quick-To-See Smith works with subtle irony and juxtaposition to create a humorous look at her experience as a Native American artist. The title of the exhibit itself, 40,000 Years of American Art, takes a sly jab at the academic definitions of American art, a genre that is often said to have matured only after World War II, thereby rejecting a flourishing indigenous aesthetic with prehistoric roots.

This is not to say that Smith’s lithographs and monotypes are tired, or retro, or wholly derivative. She is a thoroughly contemporary artist who works, like many of her colleagues, with history and politics within a newer language of modernity. And although she grapples with the mysticism and iconography from Native American culture that have become almost stereotypical, thanks to roadside trinket sellers and New Mexico-bound Easterners searching for deeper meaning (the term “Coyote Art” is understandable after a castrated-kokopelli-filled trip to Taos or Santa Fe), Smith manages to avoid the cheaper connotations. Her images are used with a delightful respect.

Smith uses traditional petroglyph images in her work to connect the lithographs to her heritage. Yet her images are expressive at some points and naive, or childlike, at others. The loose handling provides a vibrancy that is not present in many ancient petroglyphs. She also infuses her work with a modern feel; in “Untitled (wisdom/knowledge)” a simplistic historical drawing reminiscent of petroglyph is bitmapped as if printed by a computer, the curves and lines delineated by squares.

Contemporary images, set in an ancient style, are present in her artistic vocabulary. A thunderbird, corn, and stars are scattered along the edges of “Winds of Change,” and among these expected images lie also a truck, an airplane, and a cityscape. The humorous technique is similar to ceramicist Diego Romero, who depicts such everyday scenes as a trip to McDonald’s or a drive in a car in the graphic black-and-white style of his Pueblo ancestors. The intention is clear: Although Native people are living a contemporary existence, they are also tied to a tradition that remains despite change.

Similarly, “Modern Times” portrays the top half of an apple box featuring a chief’s head. From there Smith drew in the body with an ironic tone: The “chief” is wearing a suit and holding a briefcase. As stoic as the idealized apple-seller is, he remains a cartoon without a face while the person he is lives among the rat race, just like the rest of us.

As with much politically tinged art, Smith’s message risks becoming obvious and heavy-handed by the end of the show. The obviousness, in fact, may be due in part to Smith and artists like her who have effectively reopened the dialogue regarding the erasure of Native American society; museum visitors by now are generally accustomed to this argument. This does not mean that no more should be said on the subject; it is simply a call to freshen the language and look for other areas to address.

There is another area of concern with political shows such as Smith’s: the disability of seeing all issues in a black or white context. The curator’s statement quotes Smith as saying that “White people move around and are not connected to a place or community … and have no permanent connections. No matter where we (Native Americans) move, we are always connected to our tribe, our place, and to other Indian people.” Okay … so Indians = good, white people = bad? Such simplistic (and easily countered) reasoning diminishes Smith’s intent and flattens her many years of artistic expression.

It is when Smith focuses on humor that she is at her best. In “Untitled (humor),” she mines the tradition of the coyote, a character that often provided an ironic and self-effacing dimension to stories from oral tradition. In this lithograph, coyote encounters magpie and then begins faking a limp; Smith adds a current feel by adding the words “For a good time, call 1-800-COYOTE” and “Get your reservations now!” In the lower quarter, Indians on horseback are being chased by a train (rather than the other way around, as Hollywood has relied upon time and again). This subtle use of irony imbues the work with an intriguing complexity that is much more evocative than a “them versus us” dichotomy.