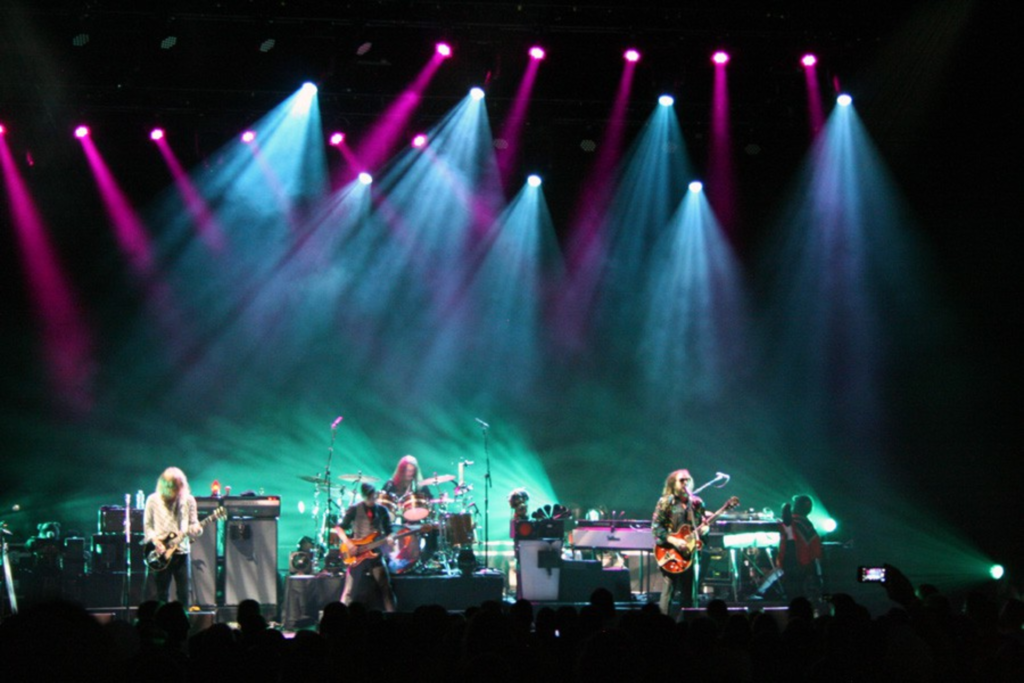 Let me get this out of the way: Before attending My Morning Jacket’s concert at Starlight last night, I was skeptical at best. This is a band whose recorded output I find absolutely soporific. But, after nearly a decade of friends insisting that I couldn’t possibly understand or enjoy My Morning Jacket without giving it a shot live, I put their opinions to the test. The verdict: Skepticism eradicated. Everyone else was right. I was wrong. OK? Happy?

Live, My Morning Jacket is a marvel. From opener “Believe (Nobody Knows),” the standout cut from the Kentucky band’s latest album, The Waterfall, I was sold. Frontman Jim James’ voice is made to soar outdoors on a late summer night. The band behind him turned songs which might otherwise sound like standard jam rock into big, powerful slabs of sound. 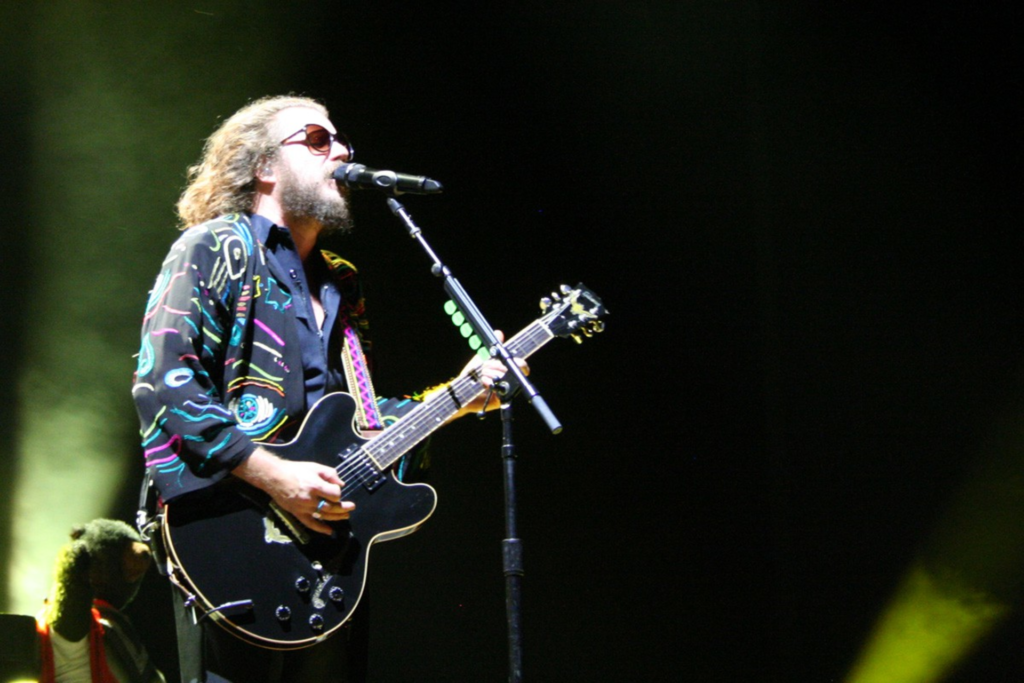 While the crowd greeted the band with enthusiasm, it wasn’t until the set’s third song, Evil Urges‘ “I’m Amazed,” that people really lost their minds and started to sing along. From that point onward, I don’t think I’ve ever seen so much unironic, spontaneous fist pumping in my life.

As for the band, it took Jim James five or six songs to properly greet the audience with a “hello,” but he made the wait worthwhile: “It is a beautiful night in this beautiful place,” he told the audience. “It reminds me of many lifetimes ago, hanging out with Shakespeare at the Globe.”

Strange allusions aside, James was quite right. The proggy nature of songs like The Waterfall‘s “Only Memories Remain” makes for an excellent live set. The keyboards especially get a chance to breathe, really coming to the fore of the songs. There were no Styx-level keyboard jams, but they sprawled out into the crowd and took up a comfortable residence. 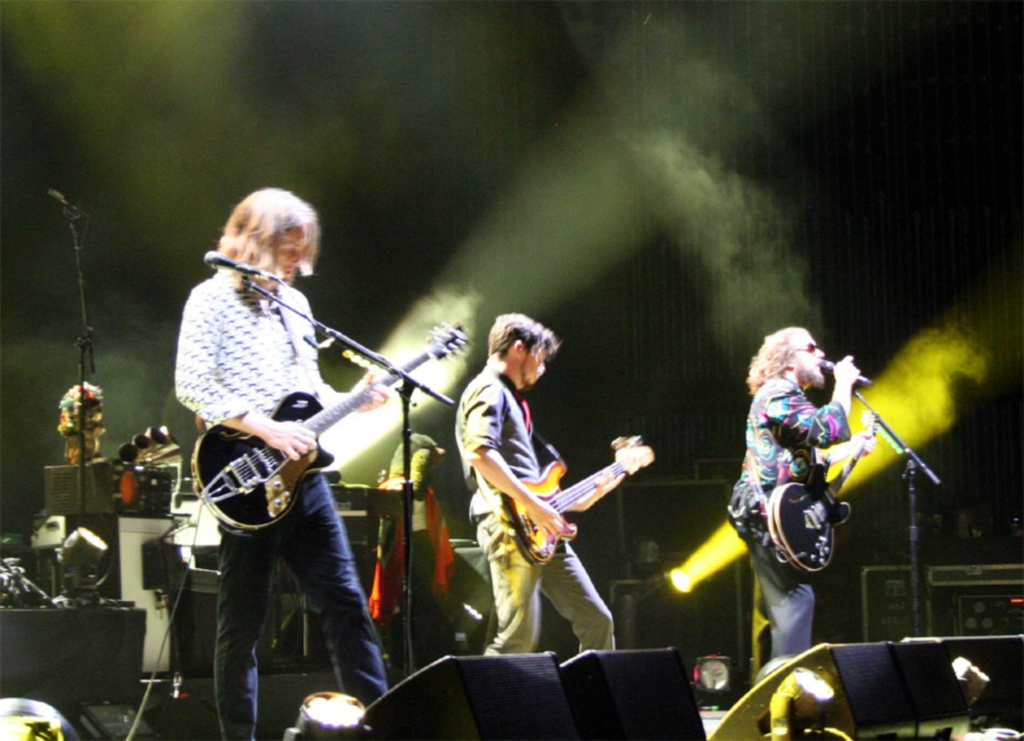 My Morning Jacket might be the one band out there to really understand what it means to be able to spread out and still rock a guitar solo, as James did on “Spring (Among The Living),” while still managing to maintain a sense of freedom and openness. The psychedelic, free-wheeling nature of James was counterbalanced by guitarist Carl Broemel and the rest of the band. Bassist Tom Blankenship and drummer Patrick Hallahan really did a fine job of laying down a solid foundation from which James or keyboardist Bo Koster could take off, with Broemel guiding James back in.

The songs themselves were also nicely balanced between the upbeat and the mellow, introspective. It let the band play the audience like their instruments, keeping the show from being too chill, but also from being a too intense. A little goes a long way, and too many groovy meditations can take a set from chill to boring. My Morning Jacket knows when to pull out something to wake everyone up, because at some point, your audience catches on to the fact you’ve been playing this song with a saxophone for what seems 15 minutes and things are starting to sound suspiciously like an outtake from Animals-era Pink Floyd. 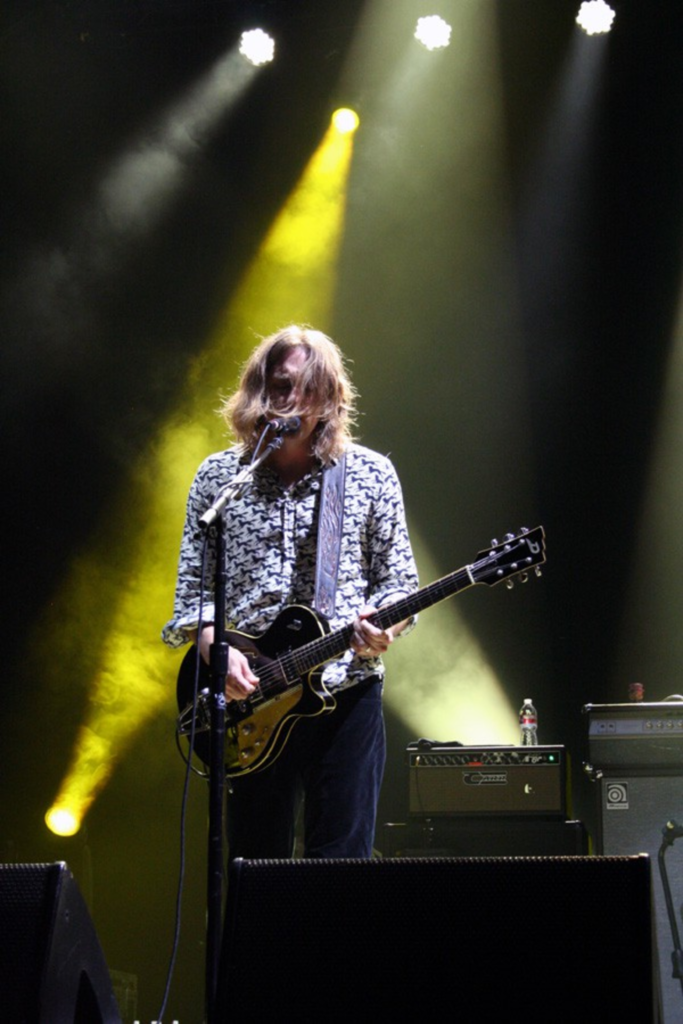 “Off the Record” and other more upbeat songs seemed to grab these people and snap them to attention, turning the entire audience into a massive chorus that knew all the words, along with when to point fingers, nod heads, and shake all over. It was a trick the band would pull off all night, right up until penultimate number, “Anytime,” with a swinging, bouncy rhythm that counterbalanced the downtempo closer, “Mahgeetah.” It was transformative. (If only that energy and attention could have allowed for communal focus on the quieter, more introspective material — but we can’t have everything.)

The crowd was of a sort. There were sandals everywhere. A lot of plaid shorts. For all the people singing along, there was an equivalent number who drank a lot (too many) of pricey beers, talked loudly during every song and took selfies with the flash on. It was distracting.

It was just that sort of night, though. Weird light effects which shook and wobbled like an off-kilter guitar line flashed over the audience while the music looped and surged with it. I watched half the row in front of me get escorted out an hour into the show, likely because of their extraordinarily flagrant and open marijuana consumption.

For all the audience annoyances, however, the show onstage — spanning just over two hours — was the thing that captivated. As a new fan, I was won over. For the old fans, there was not a single moment that disappointed. Here’s hoping it’s not too long until the band is back in town.

Leftovers: We missed openers Hippo Campus, due to a realization that nobody in the car had any cash for parking, necessitating a far-ranging trip to 63rd and Troost to find an ATM. For anyone curious, though, listen here.