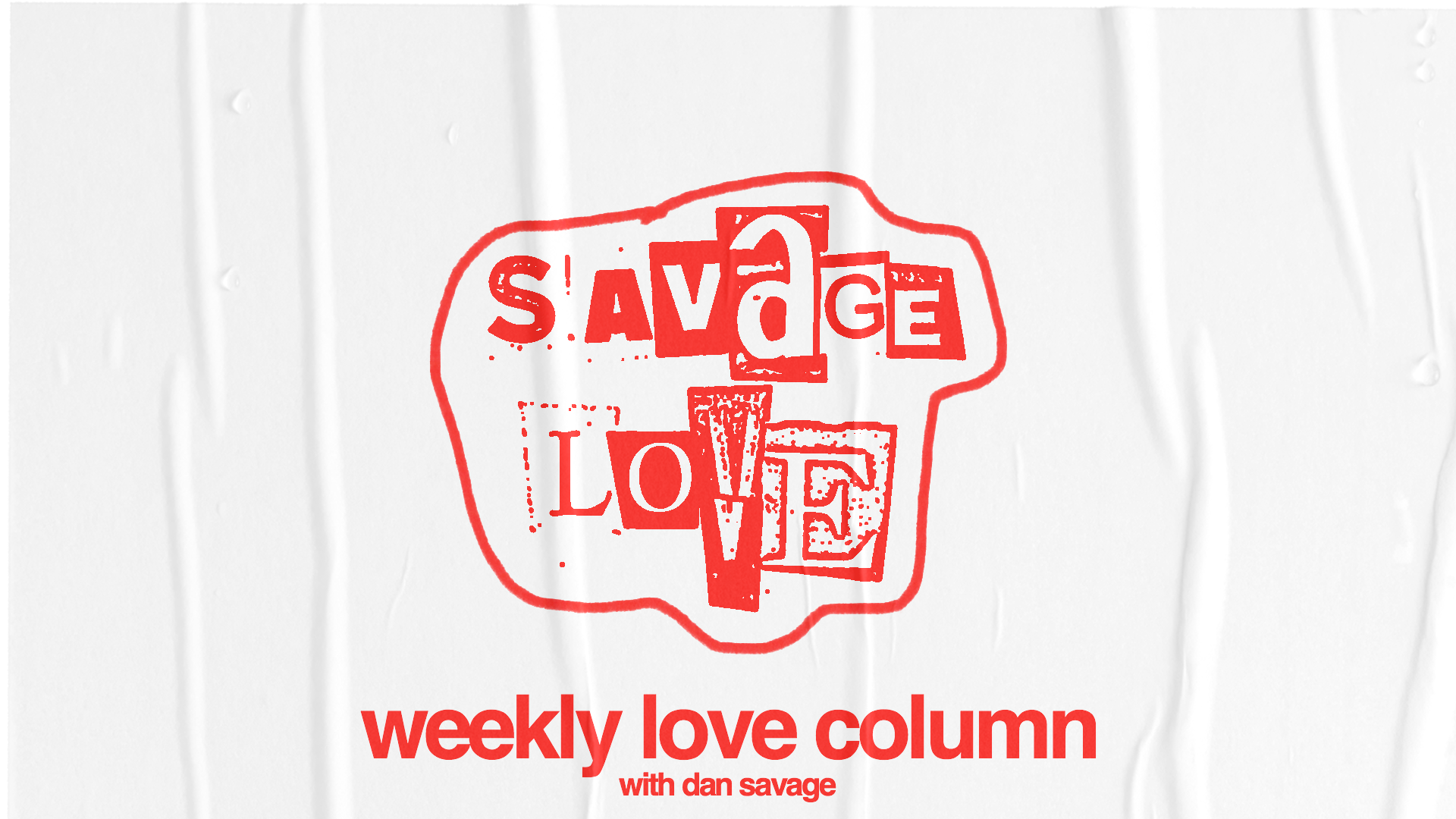 Dear Dan: I’ve been with the same amazing man a dozen years. We’ve had our ups and our downs, same as any other couple, but these days life is better than it ever has been for us. Except in the bedroom. A few years ago, he started having fantasies about sucking dick. Specifically, he wanted to suck a small one because his is very big and he wanted to “service” a guy who’s less hung than he is. Which is fine, except it’s now the only thing that gets him off. We seldom have sex since now, because his obsession with sucking off a guy with a small dick makes me feel unattractive, and to be honest I don’t share the fantasy. I even let him suck a dude off in front of me once, and I didn’t enjoy it at all. He tells me he still finds me attractive, but when we’re having sex the talk always goes to how he wants to take “warm and salty loads” down his throat. I’ve told him I’m not into it, but he enjoys talking about it so much he can’t help himself. I thought by allowing him to live out his fantasy would help him “get over it,” so to speak, but that didn’t happen. So now we just don’t have sex except once every few months. I’m not sure how to make him see that it’s just not my thing and to get the focus back on just the two of us.

Dear LOADS: If you can look at your husband and think, “Things are better than ever!”, despite the dismal state of your sex life, LOADS, I hate to think what life with him used to be like.

Now I’m assuming that you actually told him how you feel, LOADS, in clear and unambiguous terms and that you said what you needed to say emphatically. And by “emphatically,” LOADS, I mean, “repeatedly and at the top of your lungs.” If not—if you’re doing that thing women are socialized to do, i.e. if you’re downplaying the severity of your displeasure in a misguided effort to spare your husband’s feelings—then you need to get emphatic. Sometimes it’s not enough to tell, LOADS, sometimes you have to yell.

You’re obviously GGG—you’re good, giving, and game—but your husband has taken you for granted and been almost unbelievably inconsiderate. Because even if he needs to think about sucking dick to get off, LOADS, he doesn’t need to verbalize that fantasy each and every time you fuck. Even if you were into it, which you’re not, it would get tedious. And it wasn’t just selfish of him to ignore how you felt, LOADS, it was shortsighted. Because women who are willing let their husbands talk about wanting to suck a dick—much less suck a dick—aren’t exactly easy to come by.

I guess what I’m trying to say, LOADS, is that your husband really blew it. If he hadn’t allowed this obsession to completely dominate your sex life—if he’d made some small effort to control himself—you might’ve been willing to let him act on his fantasy more than once. But as things stand now, it’s hard to see how you come back from this, LOADS, because even if can manage to STFU about warm and salty loads long enough to fuck you, you’re going to know he’s thinking about warm and salty loads. So the most plausible solution here—assuming that you want to stay married to this guy—would be for him to go suck little dicks (once circumstances allow) while you get some decent sex elsewhere (ditto).

Dear Dan: I have what most people would consider an amazing life. I have two healthy kids, financial security, a stable career, and a husband who is the exact partner I could ever want. I really couldn’t ask for more. I just have one issue: My husband wants to be intimate more often than I do. We are both nearing 40, and his libido has not slowed down. I, on the other hand, due to a combination of being busy with work and us both taking care of the kids (especially during the lockdown), find myself with a decreased sexual drive. Because of all my (and our) obligations, I find myself alternating between a state of tiredness, anxiousness, or distraction, none of which get me “in the mood.” We’ve talked about the situation, and he is absolutely respectful when we do so, but he has made it clear he’s very frustrated. I think once a week is more than enough, and he could go multiple times a day. It’s to the point where he feels he’s begging just to fit some “us” time into our lives, which he says makes him feel undesirable and humiliated. There isn’t anything wrong with him that leaves me not wanting to engage in physical intimacy, we just seem to have different physical intimacy schedules, and it’s putting a serious strain on our relationship. How can we work to find a comfortable middle ground, or at the absolute least, help me explain to him why I’m not as randy as he is?

Dear CLIT: You don’t need to craft an elaborate explanation, CLIT, as what’s going on here is pretty simple: Your husband has a high libido and you have a low one.

What you need is a reasonable accommodation. Opening up your marriage obviously isn’t an option right now, CLIT, and it might not be an option you would’ve considered even if it were possible for your husband to find an outlet (or inlet) elsewhere. But there is something you can do.

Your husband is doubtless jacking off a lot to relieve the pressure. If there’s something he enjoys that you don’t find physically taxing and if he promises not to pressure you to upgrade to intercourse in the moment, then you could enhance his masturbatory routine. Does he like it when you sit on his face? Then sit on his face—you can even keep your clothes on—while he rubs one out. Does he love your tits? Let him look at them while he beats off. Is he a little kinky? It doesn’t take that long to piss on someone in the tub and it wouldn’t mean adding something to your already packed schedule, CLIT, as you have to find time to piss anyway.

If he can follow that one rule, CLIT, you’ll feel more connected and you’ll probably wind up having more PIV/PIB/PIM sex—maybe twice a week instead of once a week—but it will be sex you both want.