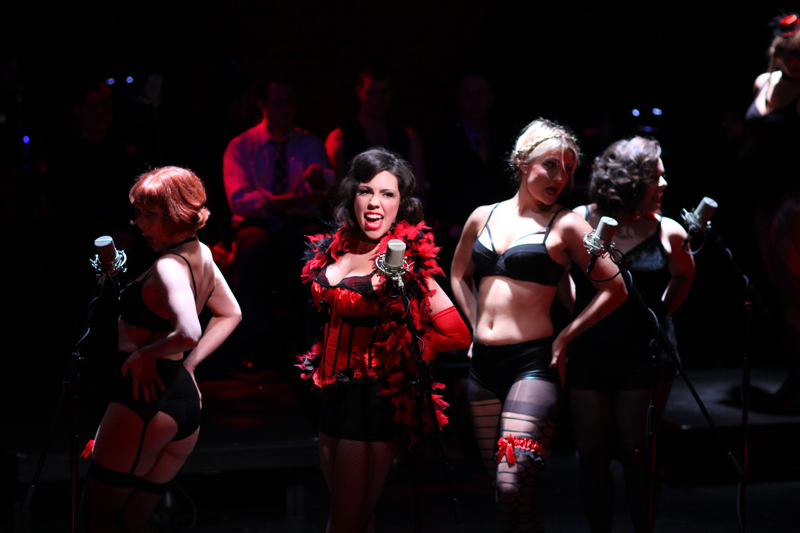 “Willkommen! Bienvenue! Welcome!” Cabaret’s emcee implores at the start of the show. “Leave your troubles outside. So life is disappointing — forget it!”

The offer — coming from the seductive, androgynous emcee (Thomas Delgado) — entices, especially these days, but it may be deceiving. Cabaret, at Musical Theater Heritage, exemplifies just how such escape works, or doesn’t.

The music, half a century on, remains inescapable. The 1966 Broadway original won eight Tony Awards, including Best Musical (book by Joe Masteroff) and Best Original Score (resounding music by John Kander and compelling lyrics by Fred Ebb), and, a few days after I saw MTH’s production, I can’t get the feel or the melody of “Willkommen” out of my head.

Cabaret takes place in the Germany of 1931, where the Nazi Party and its philosophy are encroaching on everyday life. It’s based on the 1951 play I Am a Camera, by John Van Druten, which was adapted from English novelist Christopher Isherwood’s stories of his experiences in Berlin, and it captures a view of the “live and let live” Weimar Republic in the years leading up to the Third Reich. The musical has the tangible feel of an all-night party coming to a close, reflecting not only that anything-goes past but also the power and the insidiousness of beliefs residing just beneath society’s surface — like that queasy sensation after overindulging.

Having missed the 2011 production of the musical at Kansas City Repertory Theatre, I had only the 1972 movie to go on. The film (directed by Bob Fosse and winner of the Oscar for Best Picture) is a “sanitized message of this show,” says MTH Executive Director George Harter. The film also adds characters and significantly shifts the focus of the story. I vote for the live version, even with MTH’s typically stripped-down approach. Dynamically directed here by Sarah Crawford, it’s colorful and libertine, heartfelt in places and clandestinely dark.

A stellar cast (not a weak link here — the actor-singers articulate their roles with depth and full voice) and a powerful seven-piece band, including reeds and brass (conducted by pianist Jeremy Watson), drive this Cabaret. German accents don’t distract from a production that feels lush in its decadence and intimate in its performances. With nearly a blank slate of a set — a row of mics, a platform, a backdrop of the cabaret’s lighted signage — Crawford’s staging and Kylor Greene’s lighting design create dimension as well as shifts in time and place between the goings-on in the seedy Kit Kat Klub and the characters’ lives outside it. Add Mindy Moritz’s choreography and Beth Benedict Borders’ costumes (including black lingerie), and the show is both visual feast and forceful story.

The narrative revolves around Clifford Bradshaw, an American writer vis-à-vis Isherwood (John Cleary), who arrives in Berlin to work on a novel. He befriends the German Ernst Ludwig (Brian Paulette), who refers him to a boardinghouse run by Frau Schneider (Deb Bluford). When Clifford visits the Kit Kat Klub, he meets headliner Sally Bowles (Stefanie Wienecke), a shallow, fun-loving British singer with deluded ambitions, and the two develop a relationship. Adding to the storyline: boardinghouse tenants Fraulein Kost (Liz Golson), a prostitute, and Herr Schultz (Daniel Lassley), a Jewish fruit vendor.

Cleary is solid, navigating from newbie tourist to social observer to emotionally entangled friend and lover. As the emcee, Delgado is mesmerizing. The excellent Paulette is affable yet foreboding as a businessman with a hidden agenda. Bluford, a skilled veteran, finds warmth in a rough-around-the-edges landlady, while Lassley brings sensitivity and poignancy to her beau (their touching “Married” and her sadly realistic “What Would You Do?”). And the outstanding Wienecke puts her own layered imprint on the self-centered Sally, a role made famous in the film. (Some of Wienecke’s standout songs: “Perfectly Marvelous,” sung with Cleary; the risqué “Don’t Tell Mama,” performed with the Kit Kat Girls; and the affecting “Maybe This Time.”)

In smaller roles: Golson is very good, adding sass, humor, and a peek into the German mind at the time (she’s also one of the six Kit Kat Girls), and Bob Wearing and Anthony Gasbarre bring distinctive presences to Bobby and Max, respectively.

Kander and Ebb’s compositions are obviously memorable, but the story of the people caught up in that time locks on to us, too. These are songs you may mentally hum for days, but it’s also the play’s ideas, depicted here so personally, that stick with us longer than that.

Through November 20 at Musical Theater Heritage, at Crown Center, 2450 Grand,