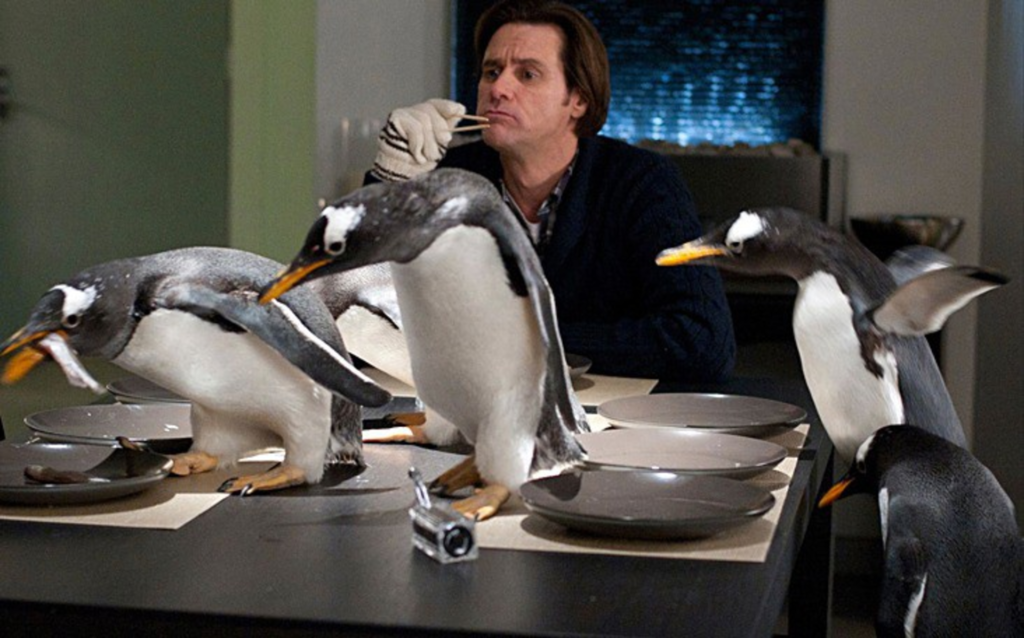 Who knew that the way to your children’s hearts was seeing a man swab a lot of penguin shit. That’s what Mr. Pooper’s — I mean, Mr. Popper’s — Penguins would have you believe.

The movie has Jim Carrey as the title character, a divorced, ambitious real-estate developer whose life gets sidetracked when he inherits a sextet of adorably incontinent penguins from his late explorer father. As expected, these creatures grow on him, as penguins will, by teaching him how to be a better father to his kids and a better husband to his ex-wife (Carla Gugino).

Going the Eddie Murphy route and slumming like crazy in a kids’ flick, Carrey practically goes on autopilot. He all but serves as a straight man to the penguins, who do most of the work (and whom the filmmakers swear are mostly real). Beyond the summit meeting of the birds and the Artist Formerly Known as Ace Ventura, however, not much thought seems to have gone into the development of this flightless film, an extremely loose adap­tation of Richard and Florence Atwater’s decades-old children’s book.

Mark Waters, who hasn’t directed a decent movie since Mean Girls, basically rehashes the premise of Carrey’s Liar Liar. Only instead of Carrey’s protagonist being forced to tell the truth to realize what a shitty father and husband he has been, he realizes it by housing some penguins.

About that: I’ve never seen a movie feature so many characters who are ill-equipped to watch over penguins. Whether it’s Popper and his unbelievably idiotic family, who would like for them to stay at his place, or the obligatory villainous zoo guy (Clark Gregg), who apparently has nefarious plans for the birds, the people in this movie have no business caring for a houseplant, let alone a penguin.

Your kids may not care. If my audience is any barometer, there is nothing more lovable than cute penguins spewing liquid ass-waste all over the place. But parents, you’ll know how full of shit Mr. Popper’s Penguins really is.