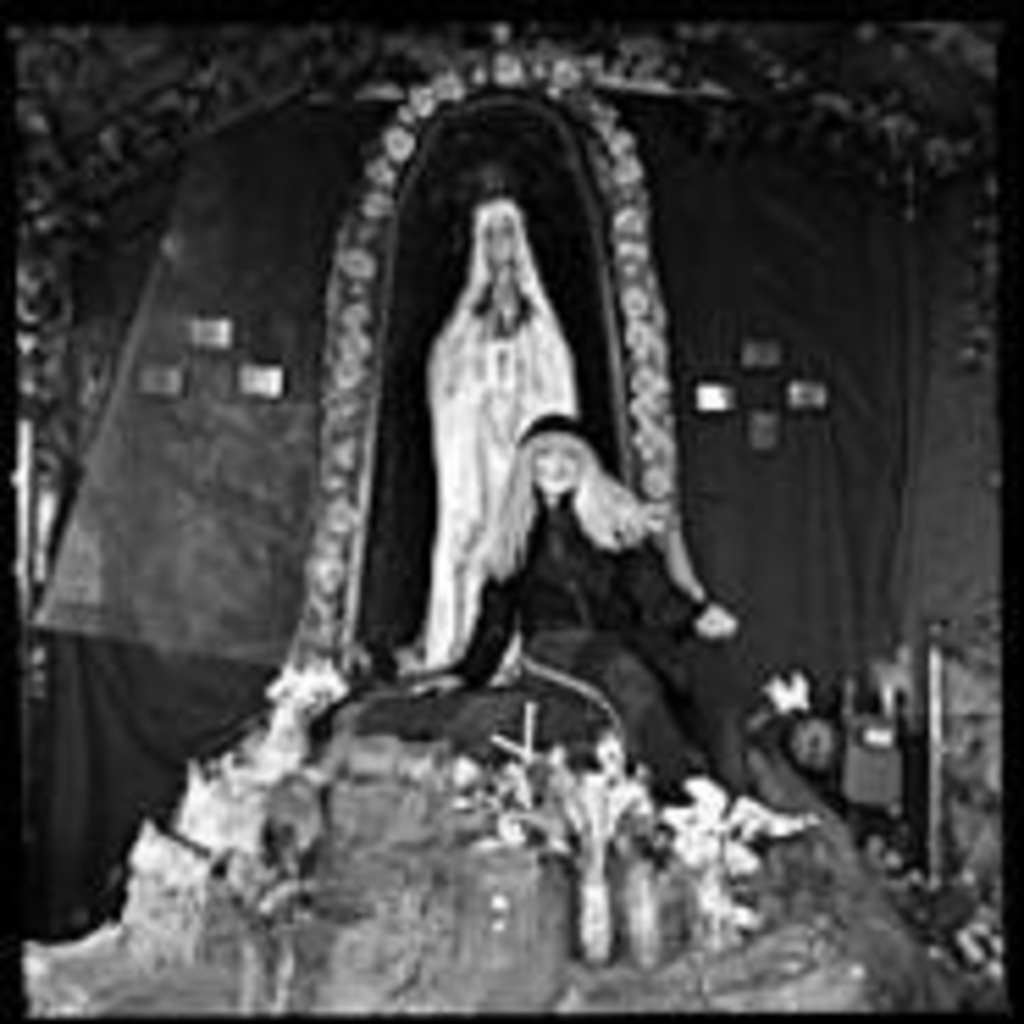 It’s been 30 seconds, max, since you rang the doorbell (or timbre, as the sign in Spanish reads) at 3520 Garner and introduced yourself to Isabella Weaver. She has already hugged you, told you she likes you, told you something rather personal and accurate about your life, and invited you into her living room. “Sit down and don’t move,” she says, showing you over a path of scattered rose petals to an extremely deep, roomy couch. She has to make a phone call. But she pauses in the fringe-curtained doorway on her way out.

“Where you from?” she asks, leaning forward and putting her face close to yours.

“But you’re around a lot of people from California, right?”

You confess that most of your family does, in fact, live in California — including your mom, who just visited.

Weaver pulls her round, dark face back skeptically. She frowns. “You wanna go there?”

“Good,” she says, suddenly perky, getting back to her search for the cordless phone. Out of view, she yells back over her shoulder, “You’re not like them!”

Why are you here, in the house of this strange stranger?

Because of the enormous, mannequinlike statue of the Virgin Mary that stands in her front yard. You’ve heard the stories about how the Virgin Mary visits this spot with stunning regularity. The figure stands on a rough, terraced, green-concrete pedestal with a ravine carved into it for running water when the weather allows. Now cold and dry, the ravine holds devotional candles, which are lit even when nobody’s home. Rosaries hang from the grotto’s green tarp ceiling, and hanging from the green tarp walls are plaques that thank the Blessed Mother for performing miracles of healing. Flowers lie everywhere, strewn around by visitors or by the wind. In the middle of this dark, gray January, it’s such a relief to see flowers that you don’t really care that many of them are fake. Some are real, and they smell inviting.

The house next door is for rent, but it’s going to be hard to find a tenant, because on its other side is a house with another front-yard altar. In that yard stands a giant cross, obviously handmade, covered in tiny pieces of jagged, broken mirror. Standing at its base are small chalk statues of Mary, Jesus and some of their New Testament pals. It will take a very unusual kind of person to sign a lease on the house between Isabella Weaver’s and the place two doors down, which is called The Center. But the right person will find it heavenly.

You have rung Weaver’s doorbell for a few reasons. You want to know why these things are here. You can tell that this is a shrine — signs leading here could tell you that much, just in case the enormous cross and the Virgin Mary weren’t loud and clear.

But why the broken mirror? Why the flowers and the candles? Who put these things here, and to what end? How do people who build shrines know what belongs there, what will attract the attention of the honored deity? What if Mary hates candles? What if she prefers earth tones to bright colors? What if she thinks roses are clichéd?

When the short Venezuelan woman finally gets off the phone with her assistant, Michelle, whom she instructs to come right over, she tells you her story.

“When the Mother of God first appeared to me, I was a Buddhist,” she begins. “Before that, I was a Catholic. My father was a very prominent doctor from Venezuela. He was Catholic, but you know how doctors are. He believed in science and told me, ‘Be careful of too much religion.’ My mom knew I was a Buddhist. I told her, ‘Mom, you know I’m a Buddhist,’ and she almost had a heart attack.”

Weaver’s mother begged her daughter to come back to Catholicism. As she tells it now, Weaver still rolls her eyes at the maternal insistence. “I told her, ‘The only way I will come back to being a Catholic is if one of them, Jesus or Mary'” — she waves an index finger at numerous images of these two, now framed by white Christmas lights on her pink and turquoise living-room walls — “‘if one of those guys comes to me themself.'” Weaver’s mother took this flippant remark to heart and spent many long, seemingly hopeless years praying for exactly such a visit to be arranged. But it’s rare in this day and age for either doctors or deities to make house calls.

The story is long and involved. For brevity’s sake, let’s just say that, as far as Weaver is concerned, her mother’s prayers were answered one fateful night in California. Mary appeared to her in a dream. Weaver felt rose petals falling on her face the whole time Mary spoke to her. When she woke up, she was sleeping not in the tent where she went to bed but outside, in the rain, which was falling on her face just like petals. Nobody had been able to wake her for hours.

Mary told Weaver to build a statue and even gave her a deadline. Weaver got the assignment on December 8 and had only until Christmas to complete it. She had never built anything in her life, and she told Mary that. But Mary promised to help her.

Judging by the results, Mary has a way not only with birthing the immaculately conceived but also with sculpting things out of papier-mâché and dirt — the poor woman’s art supplies.

People know which items to include in a shrine to the Virgin Mary because Mary communicates her desires very clearly. Mary needs the water, which she touches in the morning, for healing. Some of the shrine’s components — the candles and the plaques and even the rosaries — are instinctively delivered by visitors.

It was on a second visit that Mary instructed Weaver to tell the people who visited her grotto to get mirrors from their houses, to break them into pieces and to build a cross out of those pieces at the house down the street. Again, the Blessed Mother issued an unreasonable deadline. When one of the sweet old ladies from the parish got carried away during the building process, reaching toward the cross and whispering, “Oh, sweet Jesus” — let’s just say Weaver wouldn’t have any such nonsense. “Sweet Jesus, nothing!” she claims to have replied. “Get back to work!”

At the base of the cross is a sacred heart, she tells you, which you hadn’t noticed at first glance.