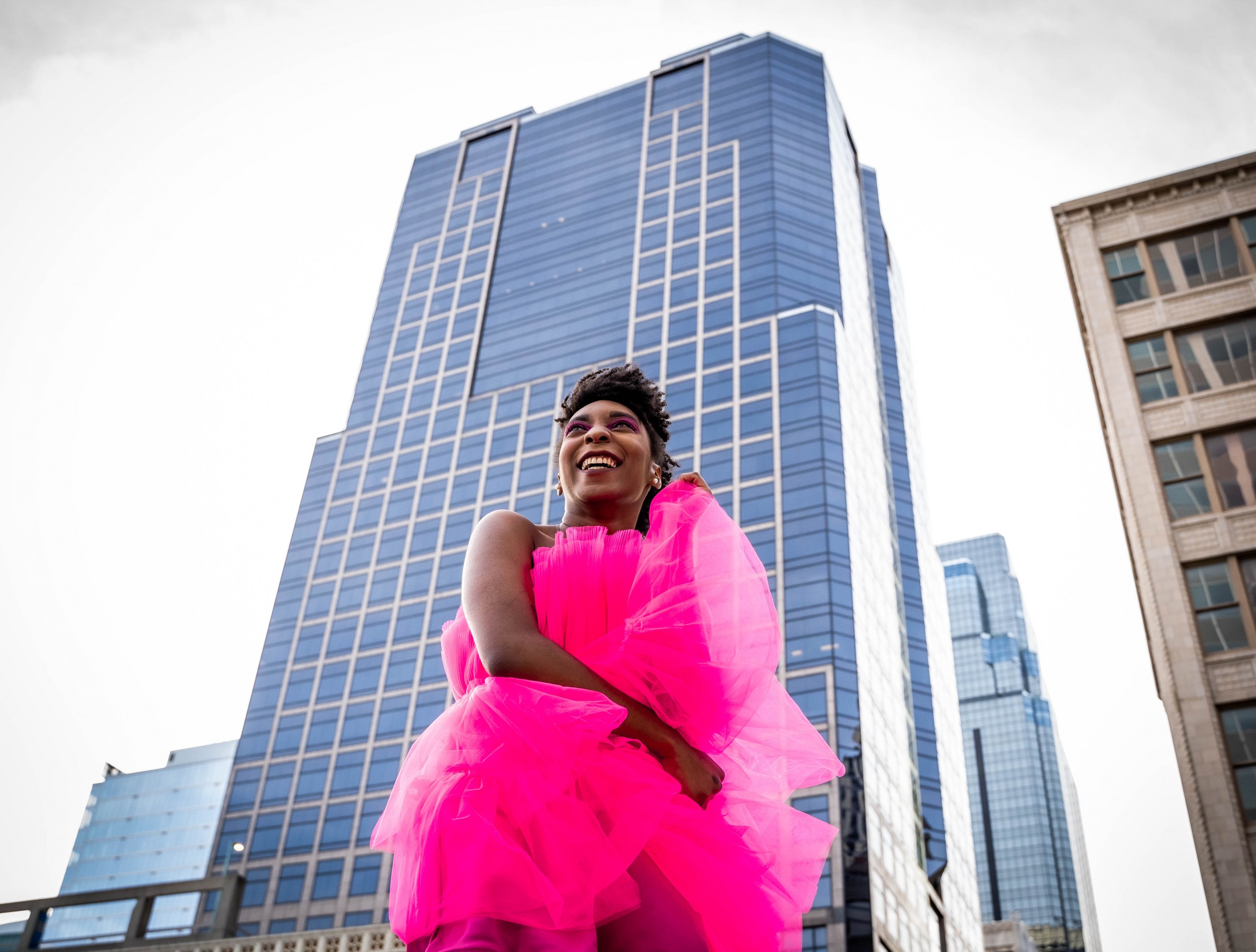 Morgan Reece is a Kansas City-based creator who you should know about, and not just for her modeling. Recently, Reece has been creating popular educational Tik Toks as @ohyikesmorgan since December 2020, with the goal of educating people about Black stereotypes and how they came to be, Black culture, and Black historical icons. Reece’s most popular Tik Tok garnered over 517,000 likes and 1.2 million views.

Reece’s most popular series, “Black Stereotypes and What They’re Grounded In,” or #BSAWTGI, currently has 27 parts and is constantly growing. She also did a “Badass Things in Black History” series to feature people of color who overcame and subverted racism. From the idea that Black people can’t swim to the Mammy trope, Reece spends hours compiling correct information for the 60-second videos.

The hours of research pay off, and viewers constantly comment their support and gratitude for the information. Comments like “you’re teaching me more about Black history than I learned in school,” and “Thank you for making these, I’m sorry about any additional trauma talking about all this may add” are common, and Reece appreciates the concern. For her, educating people with her knowledge and based on her own experience is vitally important, although it does take a heavy emotional toll.

“It’s really hard,” Reece says. “I had to take almost a three-week break just because I was dealing with things in my personal life that were really stressful and emotionally draining. And then I would come home from work and be like, ‘Oh, I need to film this extremely emotionally draining series that people really want.’ I just had to recoup, so I stopped for a while. I was doing [the videos] every day and I realized that was too much.”

“The majority of the topics I’m doing are gruesome and horrible and scarring. It’s just so emotionally draining and honestly, frankly, really depressing. Especially when I hear when I read the comments and people are like, no, I have gone through this, my family’s gone through it. I’m happy I can be someone who they look at and are like, I’m not alone. However, it’s just such a widespread issue and so many people are still having problems with racism, which in 2021 shouldn’t be happening. But alas, here we are.”

For Reece, it is impossible to fix any structural race issues without first dismantling the racist colloquialisms and stereotypes that lay the foundation for larger racist offenses. For Reece, it starts with repeating that Black people can’t swim and grows until people are throwing acid on Black pool-goers.

Before compiling evidence for her videos, Reece begins by talking to her family. As she went through a mostly white, affluent school system in upper North Kansas City, Reece says her family helped her to understand these issues more comprehensively.

“I knew a lot about [racist stereotypes] because my parents are amazing and I have amazing grandparents. When I expressed my horror when I learned about things in school, they would sit me down and tell me the things that they had gone through growing up, because a lot of people don’t understand that it’s so close, Reece says. 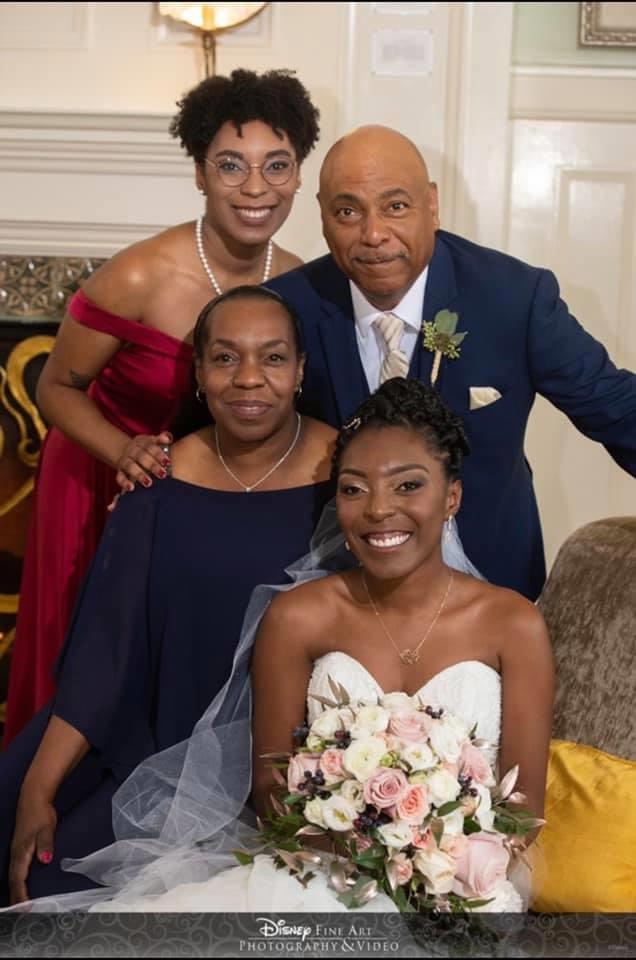 Reece (in red) with her mother, father, and sister.// Courtesy of Morgan Reece

The foundation of Reece’s commitment to anti-racist education is working to ensure that no one has to experience the trauma that she and her family, and all people like them, went through.

“One of the few stories I tell people when I’m dissecting racism is [about] my grandmother. [She] grew up as a child walking to school, holding her breath to see when she crested the hill if she knew anyone that was hanging in the trees,” Reece says. “And that was my grandmother. That was two generations ago. It really puts it into perspective. When my parents and my grandparents would sit me down and be like, these are the things that happened to us. These are the things that are still happening to us. I kind of grew up with better knowledge, but really trying to find my place in the world, understanding who I am, and kind of dismantling some kind of internalized racism that I grew up with going to an all-white school system, I started digging more much more into it.”

The idea of there being separate experiences of Kansas City, based on your race and where you lived, is not a new one for Reece. She experienced it when her high school, Staley, began bussing in students from the city after the Kansas City school district was deemed unaccredited. That experience was a microcosm that exemplified to Reece the effects of the redlining and structural racism that is still present in the city. She sees gentrification, like what pushed her out of her place in the Crossroads district, as another way that the city is targeting people of color. Reece sees gentrification attempts particularly harmful when they’re focused on Troost—the historic epicenter of Kansas City’s redlining—and historic Black districts like 18th and Vine.

“You see it trying people trying to [gentrify] the Troost area. Yes, that area does need to be reformed. However, reform and gentrification are two vastly different things,” Reece says. “You’re just pushing these people who are already disenfranchised because they’re people of color, and they’ve been pushed around their entire lives. And now you’re pushing them out of their homes they have had for years, if not decades, and they’re just becoming more disenfranchised. The city has a really bad habit of just displacing people of color who aren’t desirable for the city’s look. It’s extremely frustrating and kind of looking down their nose at this area, like you saw a lot with 18th and Vine before a lot of Black activists really started making it better, but better for the community instead of just gentrifying it. I feel like Kansas City has an issue with optics. If something is not profitable for the city, especially if they’re people of color, they don’t matter.”

The so-called Midwest Nice only extends so far when racism is involved. Kansas City is home to microaggressions and acts of outright racism just like it’s home to Jazz and major league sports teams. Reece details many instances where she’s felt unwelcome in the city, from being followed to being threatened and having racist slurs thrown at her.

“The city is like a nice Midwest town. If you have a question, people will answer it,” Reece says. “However, I always say this, but I would rather someone be overtly racist to me than subvertly racist. Because I have gone through my life with people kind of side-eyeing me, but like smiling at me, like, ‘oh, as long as you don’t steal anything.’ It’s like, I’m just literally trying to look at these necklaces. Being followed around the stores and walking down the street and people crossing the road to not walk past me because I’m Black. It’s tragic and it’s horrifying. I know, I don’t get it the worst because I’m a Black woman. I can’t imagine the Black men in the city who are just existing, and people are automatically afraid of them. I feel like, as a Midwestern town, especially a Midwestern city, it’s really easy to forget, in the liberal circles, that racism actively happens.”

To make our environment a more equitable place, we have to listen to Black experiences, but not demand explanations from them. Reece is willing to provide education to people because she wants to share her experience in order to dismantle that racism through education, but she stresses that it’s not the job of people of color to educate others.

“I’ve had a lot of people, mostly white people, ask how we can be allies and how we can learn more. And I always say it’s not people of color’s job to educate you,” says Reece. “I wanted to be that person to educate because this is my life experience. A lot of people of color don’t want to be that because it is emotionally exhausting, it is kind of re-traumatizing yourself, to your experiences, and your ancestors’ experiences. I always say Google it. Google is always there for you, it doesn’t run out of emotional energy. Google doesn’t get re-traumatized. I just kind of really implore them to do their own research and do their own groundwork.”

If you still don’t understand, Reece says that finding a person who is willing to share would be the next step. There are plenty of Facebook groups and Twitter threads that people can reference to educate themselves about experiences other than their own. In the meantime, Reece will keep doing all she can to educate others through her platform.

In early April, Reece and Sierra Berry, another Black woman, will release a podcast that focuses on victims of crime who are people of color, LGBTQ+, and sex workers. In other words, the people who are considered the “lesser dead” in the true crime world. The pair hope to bring awareness to these crimes and ensure that the victims are not forgotten.