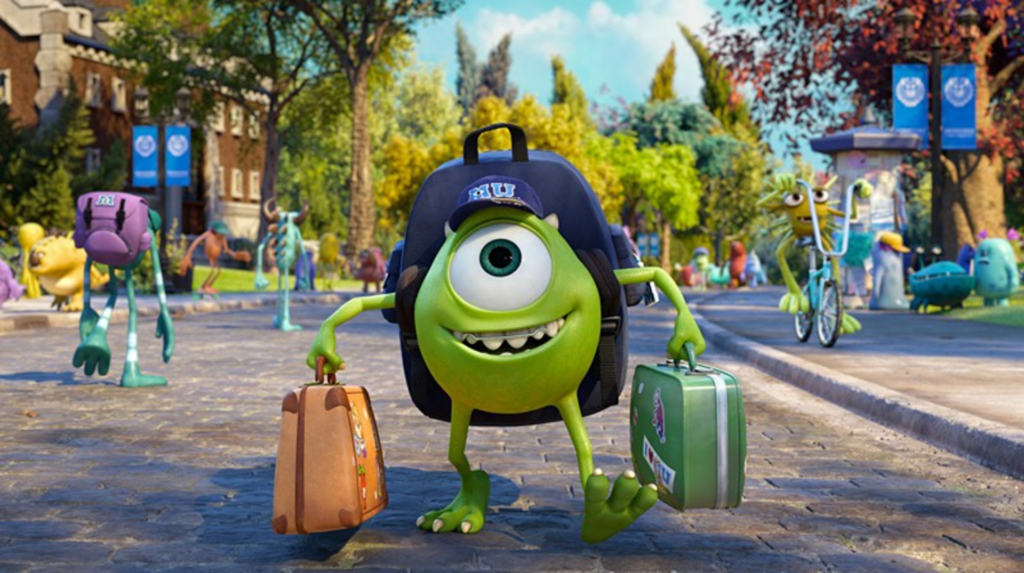 Monsters University is a rare cinematic creature: a prequel nobody asked for that turns out to be a summer godsend. Somebody at Disney or Pixar thought it would be a good idea to make an origin story for the characters from 2001’s quirky Monsters, Inc., following the hardworking bogeymen during their college years. Pixar, an animation studio that rarely dives into projects half-assed (no, I’m not forgetting the Cars movies – I said rarely!), turns the idea into an irresistible romp.

Here, that little one-eyed ball of greenness Mike Wazowski (Billy Crystal, forever hammy) is a freshman who refuses to let his lack of fearsomeness prevent his becoming what he has always wanted to be: a professional scarer at Monsters, Inc. For that to happen, he has to pass the school’s elite Scare Program. Unfortunately, he butts heads with his future best friend, James “Sully” Sullivan (John Goodman), now a BMOC coasting on his beastly ways and revered surname.

Their heated rivalry gets them kicked out of the program, forcing them to compete in the university’s “Scare Games” in an attempt to get back in. To do so, they have to join a fraternity of freaks and geeks who are also lacking in the scary department. So, to answer your question, yes – Monsters University is basically Disney/Pixar’s Revenge of the Nerds.

But the filmmakers (including co-writer and director Dan Scanlon and returning Monsters, Inc. scripter Daniel Gerson) spin comic gold out of this familiar premise. Like the first Monsters movie, Monsters University is a colorful, whirring marvel of a joke machine, serving up amusingly executed moments in its narrative as well as quick, throwaway visual gags.

Without a runaway kid in the mix to keep everything consistently adorable, this Monsters doesn’t get as sticky-sweet as its predecessor. It does, however, give audiences a rousing underdog story for all the outcast kids (and, hell, even outcast adults) out there in serious need of some uplift. Nobody may have asked for Monsters University, but I sure am glad it’s around.