How Monster Jam fires on every cylinder and every dopamine receptor 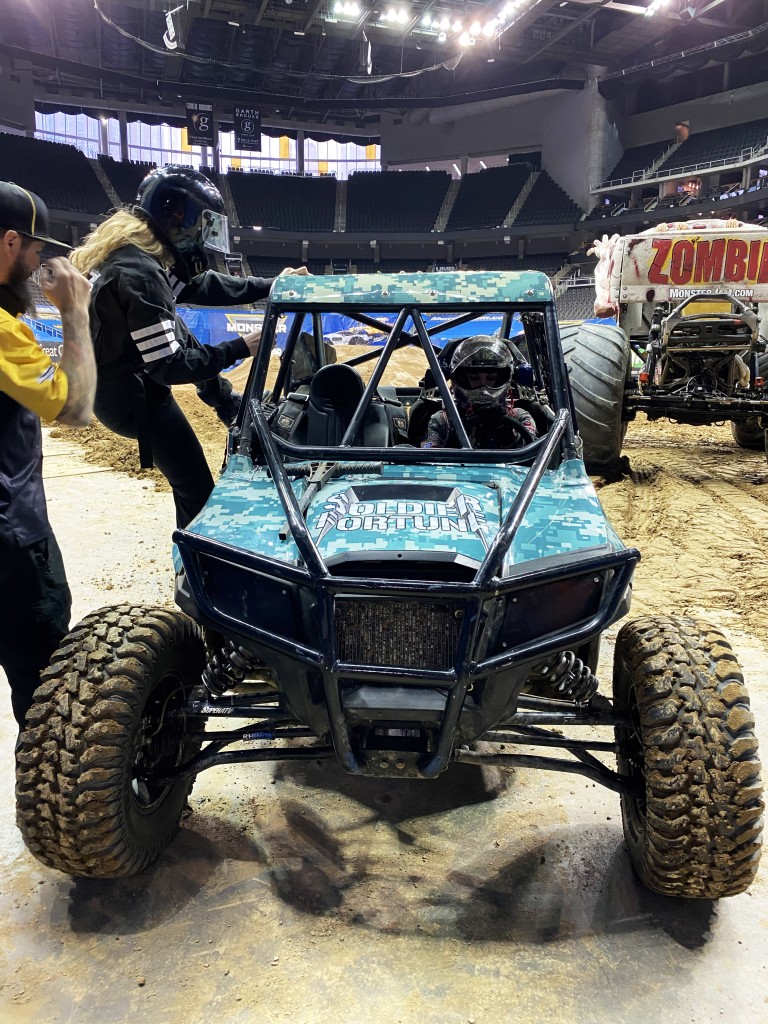 Climbing into the Monster Jam speedster made me feel like a softer, clammier Danica Patrick. // Photo courtesy of Monster Jam

It’s two years old, this video. On the White House lawn, Donald Trump clambers into the cab of a gleaming big rig, his oversized sport coat flapping uselessly around his hips. He’s pumping his fists in the air, mouth agape; he’s grabbing the wheel, tugging the horn, shimmying in excitement while a bunch of men with sycophantic smiles and a lifetime ban from Sport Clips stand around and applaud.

I watch it whenever I feel like I need to understand our nation’s biggest, wettest boy. You see, I, too, want to blow the horn. I, too, want to make the big boy truck go vroom.

I got my chance to honk in January, when the Sprint Center hosted Monster Jam: Triple Threat, a three-vehicle motorsports extravaganza. The basics: drivers compete in individual events on ATVs, speedsters (off-road utility vehicles), and monster trucks—1500 horsepower behemoths with tires the height of an adult woman. (For reference: my 1998 Chevy Lumina has about 160 horsepower, and tires the height of an adult ferret.) As with Olympic gymnastics, it’s the all-around winner that matters most.

The day before the competition, I went to the arena to do a ride-along with a Monster Jam driver. I was ecstatic. And a little conflicted. Really Big Trucks have always seemed aggressively, performatively American to me, like bald eagle t-shirts or the music of Ted Nugent. Monster Jam has some of those trappings. One of the trucks is the military-themed “Soldier Fortune,” with camo wrap and silver dog tags splashed on the side. At the merch stand, you can buy a Pepto Bismol-pink tee that says “ALL AMERICAN GIRL” in the font of a Wild West saloon.

I tamped down my reservations and tugged on a fireproof racing suit. Enter driver Kayla Blood—Kayla Blood!—jogging across the mud in a camo-patterned firesuit, helmet tucked under one arm, sheets of vibrant purple hair cascading around her. She looked like a gladiator, the yawning Sprint Center a modern Colosseum.

A technician fused me to the passenger seat of the Soldier Fortune speedster with an improbable number of straps and harnesses. Blood cracked some jokes, unbothered by the sweaty writer next to her. She had a classic tough-girl cool, a practiced spontaneity that suggested that at any minute she might sack-tap you or quote a ‘90s SNL sketch. She didn’t do either of those things. She just took off.

The engine wailed. Specks of mud splattered my face like bugs on a windshield. We took a corner so fast I was sure two of the wheels were hovering above the ground. It felt like we were going 90 miles per hour. We were probably going 55. Blood carved a donut into the track—a perfect pirouette—and I screamed, more out of admiration than surprise.

She dumped my limp, damp body backstage, where the Big Beautiful Trucks were getting tune-ups. Here was Alien Invasion, its gleaming silver body striped with racing green lights. There was Max-D, a chrome-spiked truck that could have inspired the flame-throwing guitar rig from Mad Max: Fury Road (the “D” in “Max-D” ostensibly stands for “destruction,” to which I say: sure, Jan). Everything smelled like spray paint; every truck was exposed. I wondered silently whether any of the driving teams had ever tried to sabotage each others’ rigs.

Then drivers Joe Urie and Bernard Lyght tore past me on skateboards, their laughter echoing down the smooth concrete corridors of Sprint Center’s backstage. And I remembered: these guys are on the road together all the time, bored together all the time. And I also remembered: some of these guys are young. Both Urie and Grave Digger driver Tyler Menninga are only 23 years old. 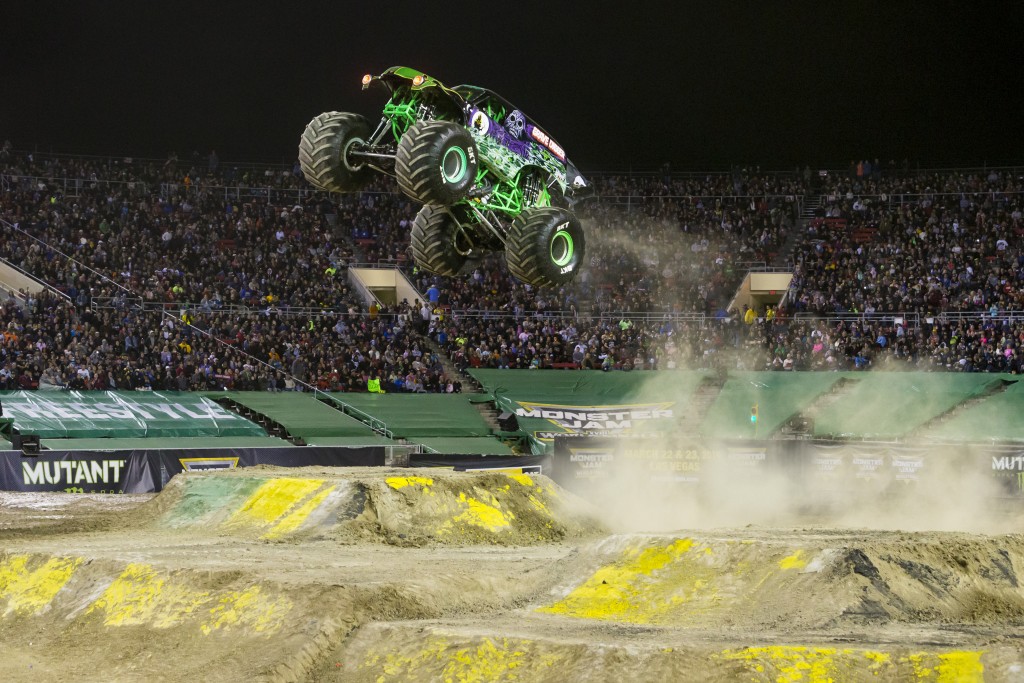 One foot on the gas, one foot in the grave. // Photo courtesy of Monster Jam

Urie, a native of Bolivar, Missouri, is bright-eyed and fresh-faced, with good media training and an Instagram full of pictures of his coffee-can-sized biceps. He tells me he grew up watching Monster Jam, spent some time working on the trucks. Eventually, he went to Monster Jam University, which is a real place where real people go to learn to drive (cruelly, enrollment is invitation-only). I asked him if there were grades at Monster Jam University.

Urie drives Zombie, a blood-spattered truck with enormous prosthetic arms reaching out from where the side mirrors on an ordinary truck might be. Like Urie, Zombie is young—the truck debuted in 2013 (some of the more well-known trucks, like Grave Digger, have been on the circuit since the ‘80s).

Both truck and driver have a long career ahead of them. But when the road life gets rough—Urie was so travel-weary when we spoke, he couldn’t remember where the show was headed next—he says he remembers the fans.

“I know there’s a bunch of little kids in the crowd just as excited as I was growing up,” he says. “So I don’t consider it work.”

At the Saturday night show, Urie was the obvious hometown favorite. When Zombie trundled onto the mud, half the arena started waving “zombie arms” in the air. The other half joined in once Urie throttled up a dirt mound while balancing his truck on two wheels.

As spectacles go, Monster Jam was somewhere between The Fast and the Furious and Disney On Ice. Sure, there was flying mud, crunching fiberglass, engines louder than Jesus. But there were also balletic turns and jumps, all interspersed with the low purr of an idling engine, so much space between the revs you could count them like thunder.

The whole evening was a series of small, bewildering miracles. During the intermission—it’s called “intermission,” because Monster Jam is a play—a bunch of techs emerged from the bowels of the Sprint Center to mist the earth with a giant hose. A hawker demoing a lime green toy called a “Digger Disc” slipped and fell on his ass in the mud. It was an absurd fall, a cartoon-character-on-a-banana-peel fall; the crowd cheered him like he was Patrick Mahomes. 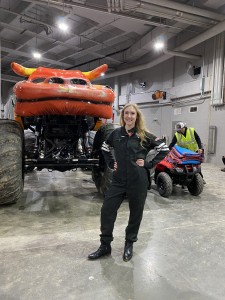 Posing for a quick photo before my monster truck ride. // Photo courtesy of Monster Jam

Everywhere I looked there was uncomplicated delight. Two kindergarteners in matching, Monster-Jam-branded sateen zip-ups screaming “GRAVE DIGGER!” in unison. Driver Bernard Lyght breakdancing in the mud to that Justin Timberlake song from the Trolls movie, skinny dreadlocks helicoptering around his face. An announcer instructing the crowd to carefully weigh “the presentation of the donut.”

And whaddayaknow: Kayla Blood presented the hell out of her donut. She donuted so hard she cleared every last speck of mud from the Sprint Center floor, leaving a perfect disc of naked concrete behind. She won the event handily. In the post-event interview, she grabbed the mic and shouted, “Nothing I love more than getting out there and doing some awesome cyclones for you guys!”

This was an objectively ludicrous statement. I cheered.

It is impossible to enjoy Monster Jam ironically. You can enjoy it only for what it is: big, goofy trucks doing big, goofy stunts for an audience that’s definitely not cool to drive. In that respect, Monster Jam represents what I love about sports in general: the purity and intensity of the moment, the feeling of being surrounded by strangers who have all turned their furious attention toward the same simple thing.

Riding in that speedster with Kayla Blood felt like flying. I grinned like an idiot. I shouted “WHOOOOOOO!” like a kid on a roller coaster—look, Ma, no hands. If I hadn’t been cradled in my seat like an egg in a high school physics experiment, I would have pumped my fist and shimmied in excitement. I would have looked for a horn to blow.

Monster Jam is coming back to Arrowhead in June (assuming coronavirus chaos has ended by then). I don’t know if I can go back. I worry about burning out my id, like lab rats who’ve fried their dopamine receptors on too much sugar water and cocaine. But would I recommend it to a friend? Fuck, yeah.