Monster Closets: D’s vampire tale drains you of the will to keep playing 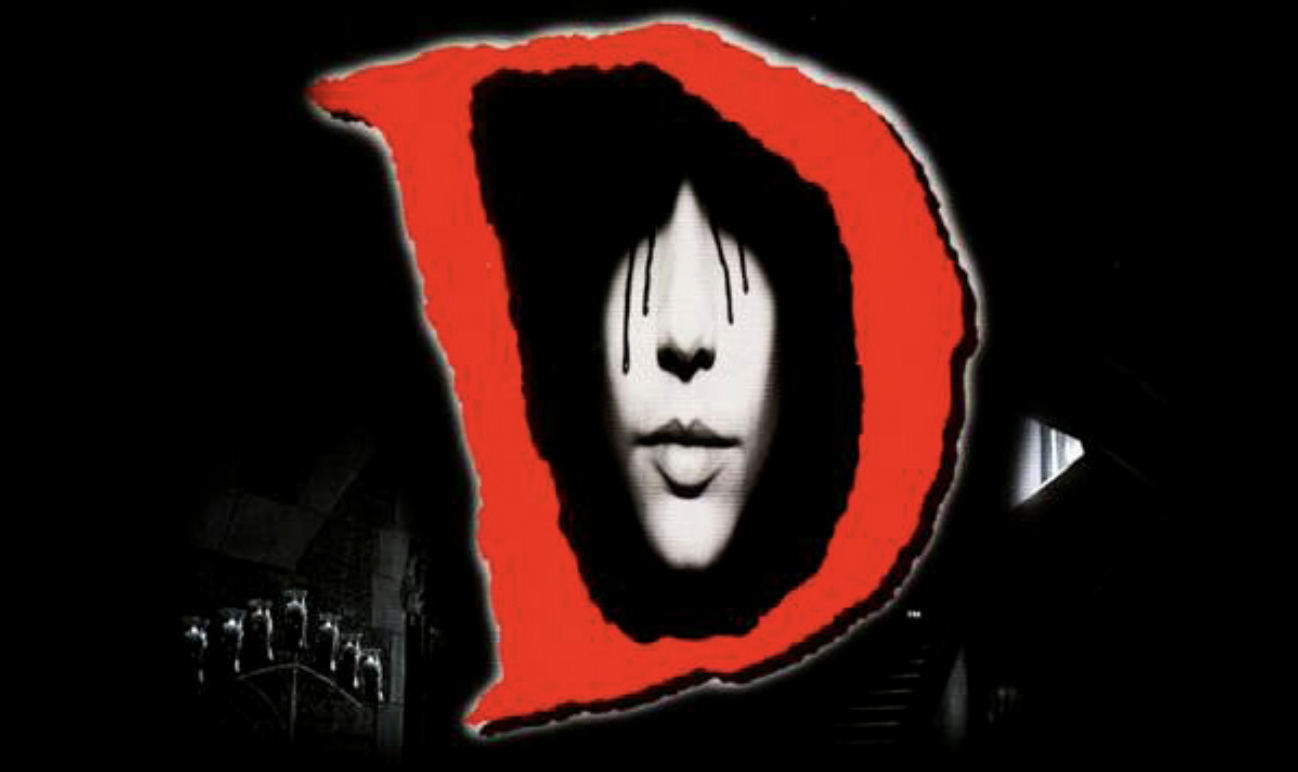 Monster Closets is a randomly-regular column where Brock Wilbur takes a trip back through the highs, lows, and generally bizarre elements of the survival horror video game genre. This is exceptional niche writing but hopefully funny to the outsider by the nature of just how sheerly unhinged some of these works of art come. Please enjoy ahead of Halloween!

I’d heard about D for years because it occupies that very specific cult-like status of being so terrible that it’s impossible to take seriously but so decidedly other that it requires some attention. A 3D0 game that ranks among the most popular releases on the platform, it represented a huge leap forward for gaming at the time and was a (shockingly) huge financial success.

When PlayStation later ported it, the supply could not meet early demand. In that way, again, it deserves some attention, if only to bask in the idea that twenty years ago this broke ground for interactive storytelling in a way that trickles down to everything that I love. But oh wow does the origin represent that rough compilation of ideas that marks something brilliant, insane and, in retrospect, quite bad.

The story opens on a hospital in Los Angeles and, more specifically, on a doctor who is a nice dude known for being quiet and keeping to himself. He then murders everyone in the hospital. You saw that coming. Somehow, he’s also managed to keep the fence to the hospital(?) locked so the police cannot get in. How one guy pulled this off begs a number of questions, but also the hospital is in downtown LA, but it looks like Castlevania, so we’re off to the races. Speaking of races, the doctor’s daughter laura hears about this series of events and drives down immediately from San Francisco a location nearly an hour away.

You play Laura. You manage to sneak past the entire LAPD and enter the hospital, which I surprisingly buy much easier than the entire plot to this point. Your dad is doing a murder spree somewhere in this building, so you start to explore, but then you maybe get teleported to another dimension? It’s hard to explain, but you’re absolutely in a weird trap castle, and if you don’t
escape within two hours, you’ll be trapped here forever.

D is better if you don’t think about it as a videogame. It clearly wants to be considered an interactive movie of sorts, but it is also anchored entirely in its mechanics. Imagine if the game Myst were very ugly and pixelated and too dark to see. Then, imagine that every time you moved between two locations, even if it is just a few feet forward, the game locks you into a long animation with heavy footsteps that goes far too slowly for a protagonist with a ticking clock locked in an evil nightmare world. Each room contains a puzzle that usually involves turning a crank or matching up some images, and the solution is always in that same room. 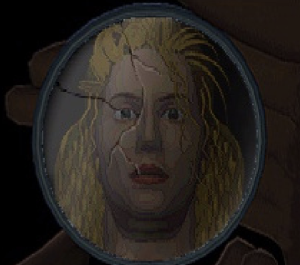 The fight you wind up engaged in becomes managing the input of this information into the game world without accidentally slowly lumbering away from the puzzle or ineptly turning two gears in the wrong direction.

In your inventory, you have a watch that shows you how much time you have left and a make-up mirror that you can stare into to get visual clues to overcome the current problem. Unfortunately, most of these are simply images of the puzzle you are aware is the only puzzle in your room, and each use of the mirror cracks it until it breaks. It is amazing to watch a game limit the use of a worthless device. It is genuinely one of the funniest things i have ever seen in all of gaming culture.

As you progress through a series of rooms with puzzles that seemingly exist just to be puzzles in a space that would never exist, the silence and boredom is occasionally broken up by sudden bursts of impotent action. A wall full of spikes rushes across the room . . . Only to stop directly in front of you. For no reason. A giant boulder rolls down some stairs . . . And you outrun it.

These sequences make a great case for why quick-time events have a place in games. And then the game actually tries one. A suit of armor comes to life and attacks you with a sword, and you must evade it, but if you fail you fall into a pit and climb out to retry again. 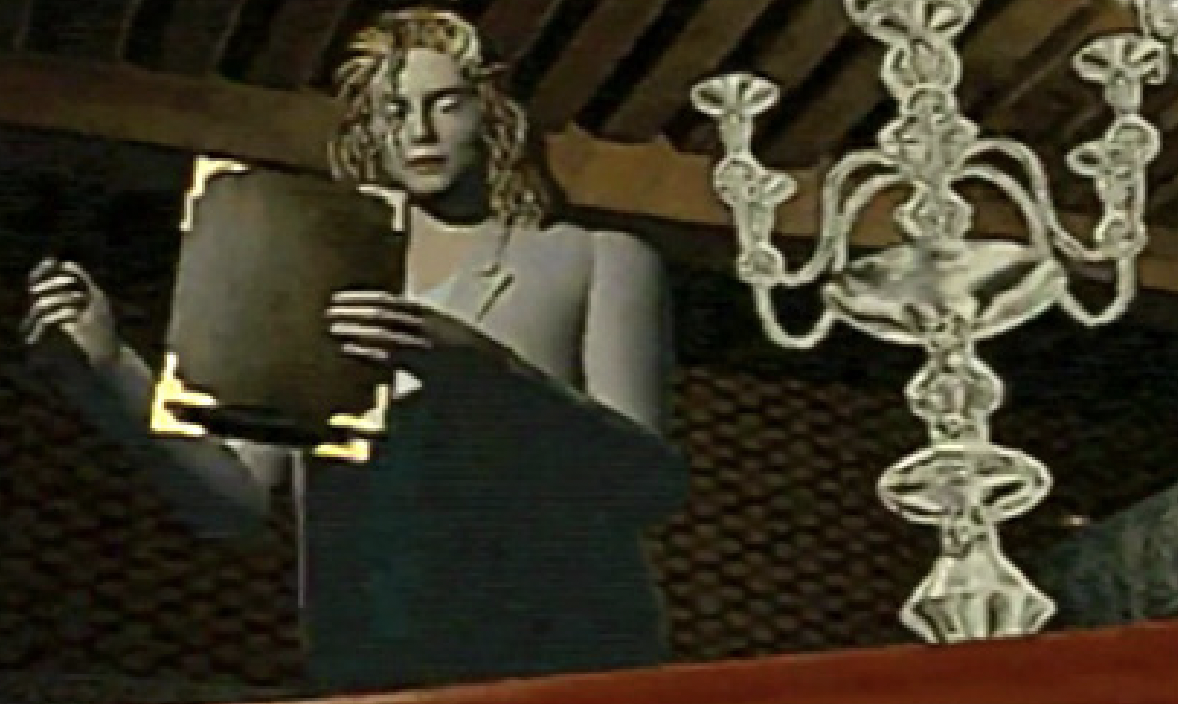 See, death would be an easy escape in D. Instead, you are both limited by, but also locked into, a two-hour story. There are no save points, but there are infinite redos until the clock runs out. The horror of clumsiness is breathtaking to behold.

Meanwhile, a series of magic bugs cause you to hallucinate memories of murdering your mother as a child. The final flashback here is a mix of hilarious limited media and agonizing brutality, as you (as a child) repeatedly stab your mother while only her cries can be heard. On some cuts, blood pours out of her. On other cuts, nothing but pain.

In the end, you track down your father in this dimension only to be told the great twist of d: your veins run with the blood of your ancestor, Dracula.

Your father’s body goes all Lawnmower Man and he demands to devour your flesh so that Dracula may live again, and you are presented (i shit you not) with the choice to either shoot your father or let him eat you alive to bring forth a dark vampire lord.

This game sold a million units on release.

That’s it. You spent two hours suffering a maze that exists only for you in an effort to recall a tragic past that directly asks you to surrender your life for sins that are not your own. There’s no superpowers or grander reveals, just the knowledge that your family is really messed up and you’ll never fix what’s wrong in your blood.

There are interesting, poetic things that could be said about this, but after two hours of poorly CGI’d mouths flopping while a disconnected voice-over pours out, the credits themselves are your only reward.