Monster Closets: Amiga’s 1986 Zombi was a Dawn of the Dead adaptation that went too accurate for fun

Monster Closets is a randomly-regular column where Brock Wilbur takes a trip back through the highs, lows, and generally bizarre elements of the survival horror video game genre. This is exceptional niche writing but hopefully funny to the outsider by the nature of just how sheerly unhinged some of these works of art come. Please enjoy.

One of the great moments in horror games is winding up in a situation where you have absolutely no idea what you’re supposed to do. This is a technical level of fear—a structural lack of direction that leaves you guessing how to survive. True horror is in uncertainty and formlessness. Sure, scary games have introduced some basic ideas like stealth or health packs or limited combat that apply across the genre, but if you go back to the very genesis of the form, there are no such universal guideposts and the end result is often a mix of frustration, misery and unfathomable panic.

The game itself is a bizarre treasure trove of historical fun facts. It’s the very first game made by a small five-person team working under the name Ubisoft that would later become one of the three biggest names in all of gaming. It’s a point-and-click adventure game from 1986 that beats many famous genre highlights from Sierra and LucasArts to their punches, despite not having any idea how to make the interaction work. It is also—and this is entirely genuine—perhaps the greatest non-licensed movie adaptation of all time.

This game, developed for the Amstrad CPC (and later ported to a number of platforms including Amiga and DOS), features four main characters that you can switch between, a first-person view of the world, a list of character stats and the name of the developer (Ubisoft) which is constantly in frame. That last detail seems hilarious now and I wish more Xbox games constantly reminded me that they were from Xbox while I hold an Xbox controller to play Xbox. Anyway.

The basic idea here is that your four characters were in a helicopter that ran out of gas. They parked atop a shopping mall that is full of zombies. What needs to happen next is, exactly as you just guessed it, the plot of George Romero’s Dawn of the Dead from 1978. What you might not guess is that you literally cannot play this game unless you remember all the important plot beats from that film, because without them, you’ll die and look stupid at the same time.

The four living characters (Alex, Yannick, Sylvie, Alexandre), who are all named and designed after the game’s programmers, can be controlled individually at any time and can each use one item. Once they exit the helicopter on the roof of the mall, you have no further guidance. On goddamned anything. And this isn’t just a modern issue, because I read the instruction manual and it’s literally a zombie comic book that someone drew on their lunch break. 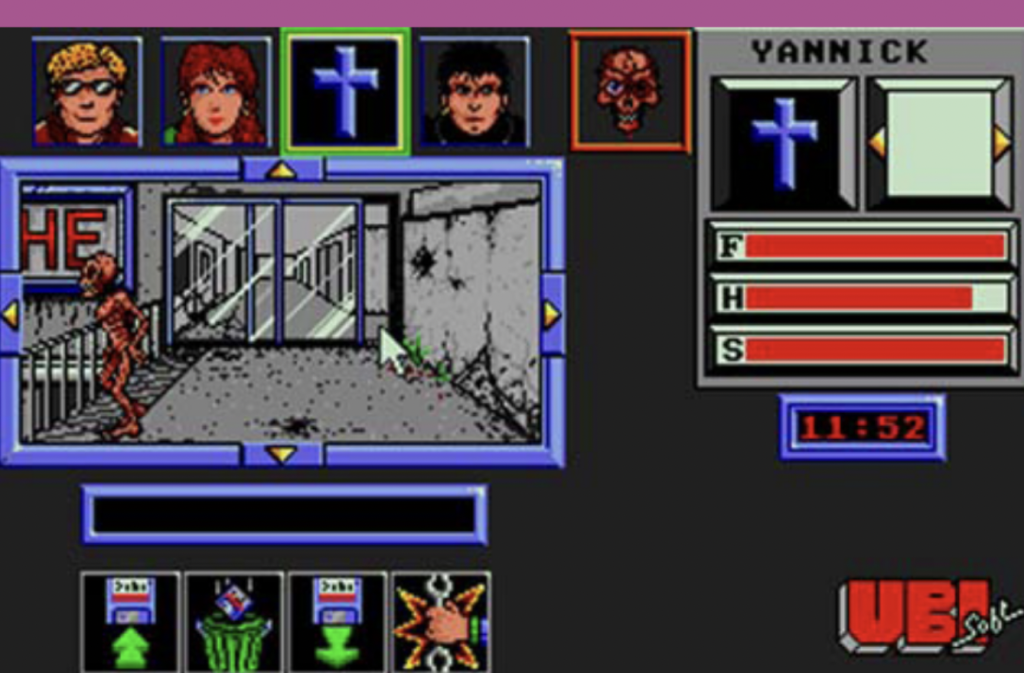 Again, this game is unplayable if you haven’t watched Dawn of the Dead. Also, it is maybe unplayable if you don’t speak at least a little French, because most signs and accidentally some of the text scrolling all remain untranslated.

So what happens in the game? Well, if you don’t understand what it’s ripping off, you take characters down into the mall where various zombies attack them while their Food and Health levels gradually deplete and, eventually, they die and turn into zombies. Game over. Fantastic.

Point-and-click adventure games are sort of famous for their logic-absent nature, or at least a logic specific to a certain kind of structure. Again, we’re so far back in gaming history. How the shit would you establish even the basic starting point of interacting with this world? I walked around a mall, picked up a wonderful collection of seemingly useless props, and got killed. Gracefully, I might add.

Spoilers in case you haven’t seen a movie from 1978:

Then you figure in Dawn. When you impose the movie’s narrative act structure onto this world, it allows you to solve every puzzle, minus one. What happens, in order, within the game is as follows: use some large trucks outside the mall to block the entrances, grab guns from a hunting store to murder all the zombies within the mall, and solve a series of electrical issues in a darkened basement, move all the zombie bodies into a now powered freezer unit, get attacked by a motorcycle gang, steal the gasoline from their vehicle, use said gasoline to refuel your helicopter, whirlybird away from this bitch. See, exactly the movie.

Hence, my application of best movie adaptation game ever. You’re literally lost without it and it sticks beat by beat to the moments within the film as translated into the game. Even the shops and mall architecture are copied. The moving of the trucks to block entrances is so directly on the nose (and poorly implemented in-game) that it screams at the player when you first crack it, “GUESS WHAT, YOU’RE DOIN’ THE MOVIE NOW.”

Zombies can be taken down via multiple body hits or a single headshot and venturing anywhere too far outside the mall gets your player automatically mobbed to death. But, as mentioned before, you can only use one item at a time. This leads to the game’s only true transcendent moment, where you need two players in the pitch-black basement at the same time–one to hold a flashlight and the other to shoot reanimated corpses. The result being the powering up of a freezer unit that you must meticulously transport all the mall zombie corpses to, or else they’ll come back to life.

Look, there is brilliance here, but it takes a very specific perspective to recognize it. This is the groundwork for everything Dead Rising would ever tackle, with an attempt to make it work in 1986 point-and-click adventure logic, hampered by poor language translation and a series of gaming systems no one understood.

It’s a true test of Gamer Logic to plow through it now.

The overriding experience feels like something a group of zombie-obsessed high schoolers should have made around the time of the original film’s release. There’s a practical application, some genuine scares, and a single audio recording of a zombie screaming “Ugh!” as if he’d hit his own hand with a hammer even though it’s the sound used for his death rattle. It only works exactly one way in an exact series of logical choices that pre-internet probably could have provided hours of entertainment and can now be conquered in around half an hour if you do everything exactly right.

But to fuck it up is to do it better. Even with Romero as guide, transitioning your movie knowledge to an adventure game format results in so many questions, and the game has no interest in providing answers. Only death. And that’s pretty metal.

KCKCC unveils "The Art of Gaming" in their latest exhibit