Money for art is always scarce, but KC and regional creators will really suffer if Donald Trump has his way with federal arts funding 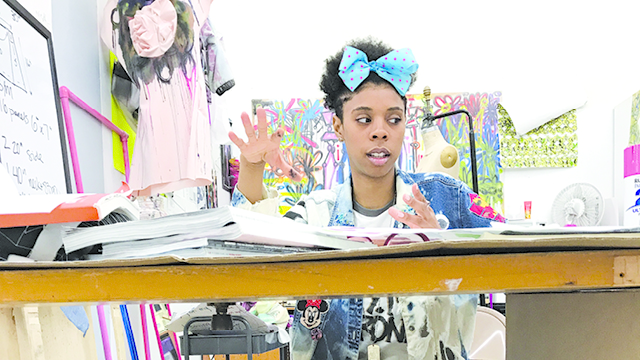 Whitney Manney sits askew behind an immeasurably cluttered desk, dragging watercolor paint along white paper with the tip of a brush. Manney says she spends most of her time at this desk, which she keeps inside the vast white studio space at Westport Road and Main Street that previously housed multiple generations of drugstores — “26/8” is how she describes the hours spent designing her audacious dresses, tops and jackets, which straddle the worlds of fine and applied art. She has been hustling in the Kansas City art community since her sophomore year at the Kansas City Art Institute, when she began designing and hosting runway shows. Even now, eight years later, the grind is real: Manney works three jobs to make her art happen.

When she received $1,000 from the Mid-America Arts Alliance two years ago, it changed things. She knows it’s not a ton of money, but when you’re hustling, it all helps. At the time, she had become discouraged by runway shows and their momentary display of outfits that had taken weeks or months to create. She wanted something more permanent — a clothing installation she could pair with an opening-night show, the best of both worlds. She partnered with the Box Gallery downtown, which put her collection on display for a month.

That show wouldn’t have been possible without the money, Manney says. The outfits for it were digitally printed, a process that isn’t cheap. The grant also went toward the materials she used for the enormous, 25-foot-by-10-foot weaving she crafted during the gallery’s opening hours, and to fund her time as a living part of the installation.

Manney’s grant is part of the nearly $26 million in federal arts funding that has flowed into Kansas City–based organizations since 1998, according to government records. Now, however, for the first time in at least three decades, that money is at risk of vanishing, along with the national organization in charge of delivering the grants. The National Endowment for the Arts is once again on the chopping block as Congress considers President Donald Trump’s proposal to eliminate it altogether.

Artists and organizations that have used federal money to fund art here and regionally say that, were the money to go away, arts programs in the Midwest would remain. But if the NEA is done away with, as Trump wants, the amount and the scale of resources — from individual art projects to arts programming and childhood arts education — would be diminished, especially in rural areas.

“A lack of NEA money would constrain all of the rest of our money,” says Michael Donovan, the head of the Missouri Arts Council, which helps deliver federal and state money to rural and underserved parts of Missouri. “We’d still have to stretch it. We’d still have to get funding to the rest of the state.”

What’s more, Donovan and others say, the elimination of federal arts funding would stifle diversity in art and limit opportunities for artists like Manney to experiment with form and presentations that defy commercial sensibilities. The federal money “makes art more accessible and more diverse for more people,” Donovan says. The council’s folk-arts program, for example, funds apprenticeships in art forms with specific cultural ties to Missouri communities, such as old-time fiddling and gospel singing. That program is funded entirely with federal dollars. If it disappeared, programs that teach young people traditional music and art might also.

Trump’s threat to cease all federal funding of U.S. arts wouldn’t necessarily kill the council, or the Mid-America Arts Alliance, which delivered Manney’s grant, right away. Federal arts money makes up only about a third of the alliance’s budget annually; only about 13 percent of the Missouri Arts Council’s budget comes from NEA funding. But both organizations say the loss of federal money would leave them searching for ways to plug funding gaps in the communities they serve, particularly in rural areas where access to other arts money and patronage is limited.

“There would need to be some kind of seismic shift for trying to find new funding sources,” says Todd Stein, chief executive of the Mid-America Arts Alliance. The alliance is by far the largest recipient of NEA money in the Kansas City area, taking in more than $20 million since 1998, records show. But, as the NEA funding partner for much of middle America, the alliance grants its money to artists from Nebraska to Texas.

In Kansas, where arts funding has been a target of the state’s government for years, the loss of federal money would be far more dire. The state’s Creative Arts Commission is a one-to-one partner with the NEA, meaning that the Kansas agency meets the NEA’s matching fund requirement, and federal money makes up about half of the agency’s budget. The state lost its NEA and Mid-America Arts Alliance funding after the state shuttered the former Kansas Arts Commission in 2012, and matching funds from the NEA didn’t return until 2014, records show.

Peter Jasso, the head of the Creative Arts Commission, says there is now little risk of the state again eliminating its arts spending, so the federal matching funds are secure — as long as there are federal funds to be matched. “What we can do with half of our budget is very significant,” Jasso says. Without putting a number on it, Jasso says a significant amount of the commission’s money is directed toward rural communities — including some so small that schools or libraries, rather than arts-specific organizations, receive money to help provide a platform for local art and artists. The same efforts are made in Missouri, where state and federal funding now reach 95 percent of state congressional districts.

The situation is better in Kansas City, but the federal money still matters. The Coterie Theater has secured at least $10,000 in NEA grant funding most years since the turn of the last decade. Federal funding makes up just a sliver of the children’s theater’s annual budget, says Joette Pelster, its executive director, and it rarely wins every grant for which it applies. But the money that does come in helps fund new shows that otherwise might be too risky for the theater to produce. “There would definitely be hesitation doing it if we couldn’t get a federal grant for it,” Pelster says.

Pelster’s description jibes with the stories of other artists and organizations who receive funding directly from the NEA, or from a local or regional organization that funnels federal money into local arts. Would they vanish if the NEA’s funding dried up? Probably not. But some of what they do would suffer or end without the funding — which means less art, and fewer opportunities for artists to create and display their works.

Over the past decade, the NEA has also granted millions to the city’s historic jazz district, at 18th Street and Vine. Among musical genres, jazz is perhaps uniquely reliant on grant funding, especially when it comes to historic preservation efforts in Kansas City and elsewhere. For example, in 2011 the NEA gave close to $80,000 to the Metropolitan Arts Council of Greater Kansas City to help fund planning for the restoration of the historic Boone Theater, which had sat derelict along 18th Street since the 1950s. Redevelopment suffered from numerous delays and revamped plans — it was once set to become the Kansas City home of Folk Alliance International; now Kansas City Friends of Alvin Ailey plans to operate the theater — but the city asked for general-contractor bids in February, and work to repair the building appears to be moving ahead.

Meanwhile, the American Jazz Museum, which operates in the district, is an annual recipient of NEA funding. The money funds several several programs, including the museum’s jazz festival. It is unclear how and whether the festival would proceed if that funding were halted. (The museum did not respond to multiple requests for comment for this story.) The list of other local NEA grant recipients covers the artistic spectrum, from the Nelson Gallery Foundation and the Unicorn Theatre, to the Lyric Opera and the Friends of Alvin Ailey.

It remains uncertain whether Congress will send Trump a spending bill that strips away federal arts funding. Ben Martin, the head of the Missouri Alliance for Arts Education, has been traveling to Washington, D.C., for nine years as part of a national arts advocacy outreach day on Capitol Hill. Each year, he says, he and others from the arts community have asked lawmakers to maintain NEA and National Endowment for the Humanities funding at current levels; legislators have, for the most part, done just that. This year, three days before the trip, Trump released his budget proposal. Martin and the arts community took notice.

“In this case, it was: Save the NEA,” Martin says of the message he and his fellow advocates took to the Hill. He met with lawmakers from around Missouri, including U.S. Reps. Emanuel Cleaver and Billy Long. (The latter’s southwest Missouri congressional district includes Springfield and Joplin.) Democrats and Republicans alike said they support federal arts funding and had no intention of eliminating money for the arts and humanities, Martin says. Even staffers for U.S. Sen. Roy Blunt, who has glued himself to Trump, have appeared supportive of continuing the NEA and its programs. “I think there’s going to be plenty of votes to pass a budget that includes funding for NEA,” Martin says.

The reasons for saving the NEA should be clear even to the rural and small-town Midwesterners who voted for Trump. Half of the NEA’s 2,300 annual grants are directed toward what it calls “underserved communities” — those outside urban centers, where funding and support for the arts is often scarce. Private donors and foundations are typically concentrated in cities, and their money tends to remain there.

That speaks to the federal money’s primary role: to expand the diversity of voices that create the fabric of artistic life and expression in America. Manney, who toils for hours in her studio to create art that bends genres and challenges convention, says she applies for grants regularly; she has won some, including an ArtsKC Inspiration grant in 2013, and missed out on others, like the Harpo Foundation grant she still covets.

“It costs me, like, a smooth $2,500 to do a show,” she says. The cost of putting on a full runway show became so prohibitive that she didn’t do one in 2016. But her creative drive goes on anyway. “It’s definitely crucial,” Manney says of federal support for the arts — to help artists afford their craft, and to let them know there’s still a caring, curious audience out there, people who want to see the creation happen.