Secrets and Lies scripts social media cheating but built on a 1660 play. 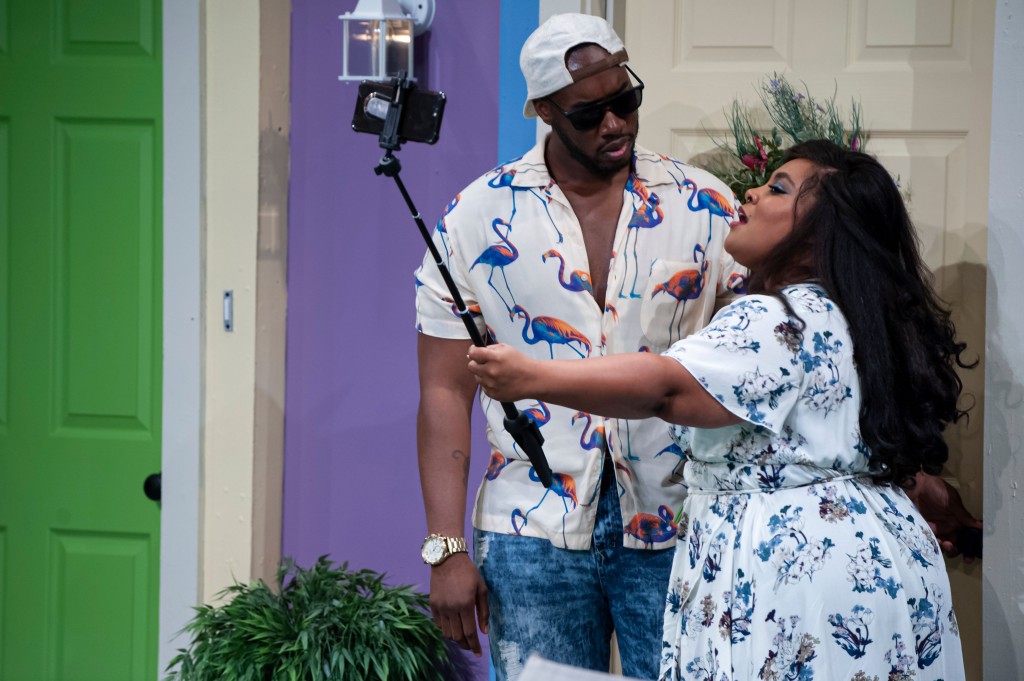 For nearly three years, KC has held a theatre celebration of French playwright Molière’s 400th birthday. Almost every venue in town has staged some modern version or re-imagining of the creator’s output. One of the final additions to that line-up is the current showing at The Melting Pot Theatre.

1660’s Jean-Baptiste Poquelin’s tale Sganarelle, or The Imaginary Cuckold, is sort of an ur-text for the theatre love triangle, and more famously our first big delve into the psychology of getting cucked—a phrase that social media trolls now toss around with wild abandon. The story of a man watching his wife fall in love with another while being powerless to stop it, or inaccurately misreading a situation and over-reacting, is sorta the basis of most anything produced in the rom-com world for centuries. Certainly much of Shakespeare’s work, the comedies and most of the tragedies, stem from a similar situation.

A group of Hollywood producers decides to create a scripted African American reality show, aware that it is based on Molière’s work. Thus begins the filming of a play within a play of the television show Secrets & Lies, featuring two African American families grappling with love and deception in the age of social media and reality television.

Okay, so again, a play written in 1660 staged as a reality TV show, featuring a non-white cast but entirely puppeteered by directors and producers who are white. If anything, points have to be given for the concept. I’m cheering for anyone who is willing to swing for the fences that hard. 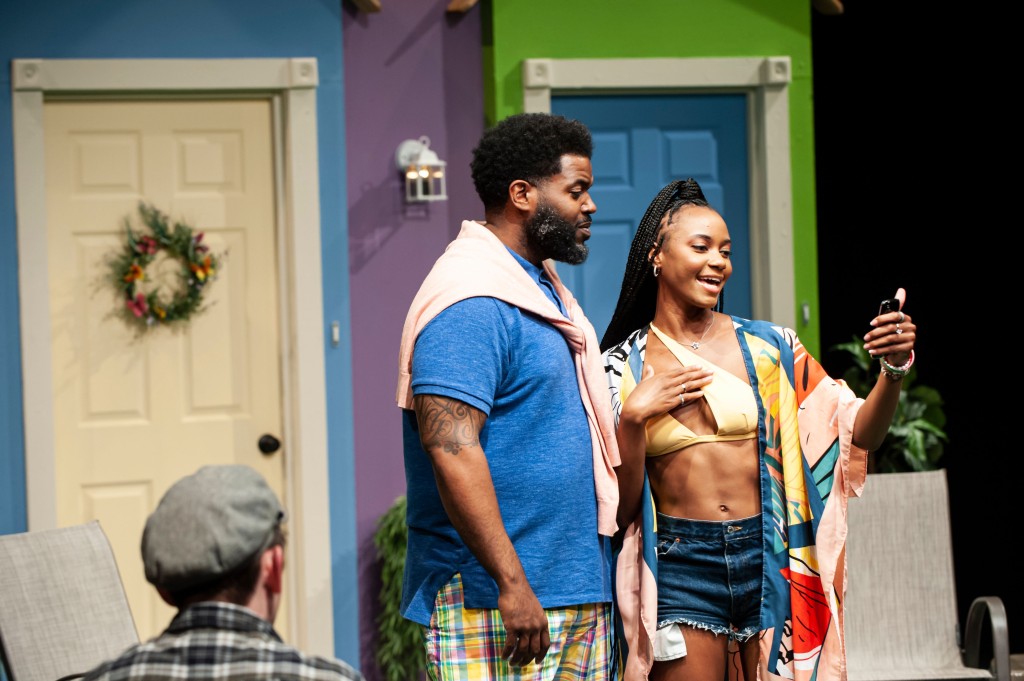 Written and directed by Nicole Hodges Persley, Secrets and Lies aims for a target that it never fully hits, but not everything in the creative arts needs to be a bullseye.

By way of criticism, there are plenty of nitpicks that can be left aside, including some oddly worded or arranged segments that don’t fall into how scripted reality, or even filmmaking itself, functions. I am certainly in the 1% on being distracted by that, and it can be tossed out of the overall rating now.

The biggest problem here is that Secrets and Lies feels like it was someone’s homework. In a few ways. Mainly, the first 30 minutes of the play introduce a host of ideas, characters, and situations—including the backstories of some of our main participants from the meta side of their lives. Most of the actors here were highly trained at prestigious colleges, are even familiar with the original French Molière text, and are aware of how low they are sinking for a paycheck to participate in this, but continue giving it their all.

There’s a fantastic foundation here for bringing this story into a modern staging where the protagonist being cuckolded is losing his wife to an Instagram influencer, upon whose DMs she hath slid into. Early on, there’s plenty of continued meta-character work around these actors, their process, line-readings, and so on bleeding into the material of the show being produced within the show. And after that introductory act, we never really see this through with new, evolving ideas. 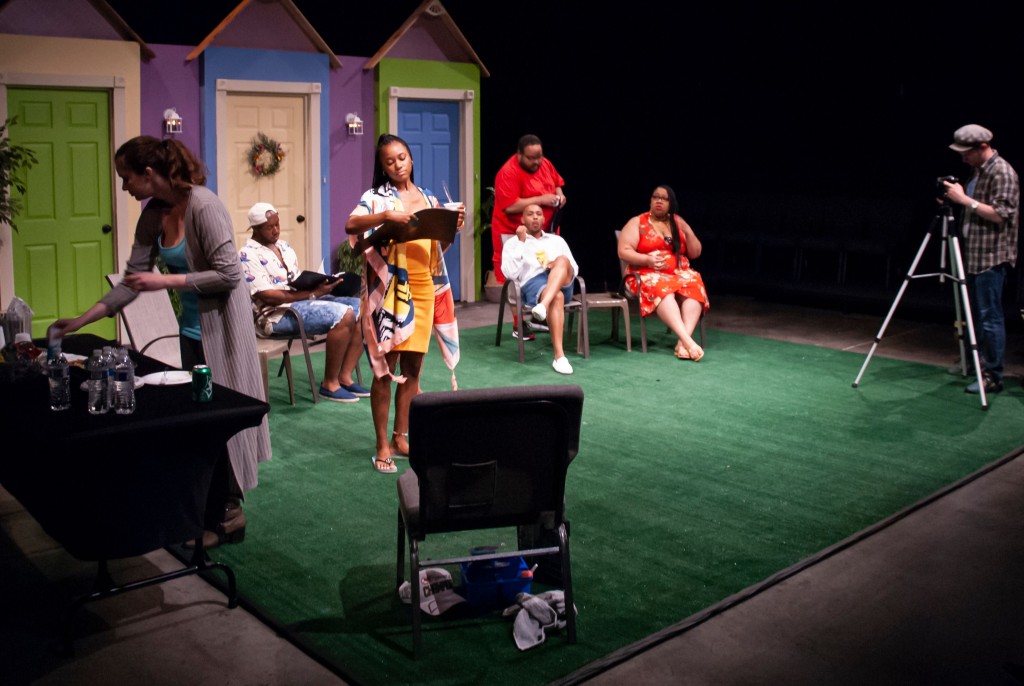 So it’s a foundation of a reimagining, that clearly had a ton of excellent time and effort dedicated to its development, and from that take-off there’s very little that departs from the original production, besides the tweaks that have already been established.

When I say it feels like homework, it does seem like someone ran out of time before the deadline when the first half of a show is so intriguing, and the second half of the reimagining mostly works from original text—albeit read by people who are looking at their phones or a script instead of playing it too straight. But equally, it feels like assigned homework in the way that the prompt of “We’re doing Molière’s 400th birthday, so put something together” feels like a homework prompt. As aforementioned, pop culture is certainly full of centuries of better versions of this story, if one was looking for a piece to update.

Melting Pot has been on a roll of some excellent, challenging, outside-of-the-box shows in 2022. It’s probably become my favorite theatre, if sheerly on the grounds of having absolutely no idea what to expect. “Molière as Black dating show” is perfectly in line with that, and while the finished product is a misstep on so many levels, it was still nowhere near a waste of my time.

The cast and their direction were more than enough fun for me to get lost in problems around the show’s structure, and in terms of laughs-per-minute it outpaced most other comedies I’ve seen this year. Our little section occupying stage left’s seating was having more fun than the rest of the audience, but whatever the cause, we were absolutely tapped into what Secrets and Lies was putting down.

With a few productions remaining, there are worse things you could do with your night than catch an intoxicating cast tackle a concept that surely no one could fully stick the landing on, while giving yourself a pat on the back for turning off Netflix for the night to see a 17th-century French stageplay.

As per usual with writing about Melting Pot Theatre, I cannot wait to see what they do next.