M.O.I. says We Might Be Wrong, but Don Wilkison is probably right 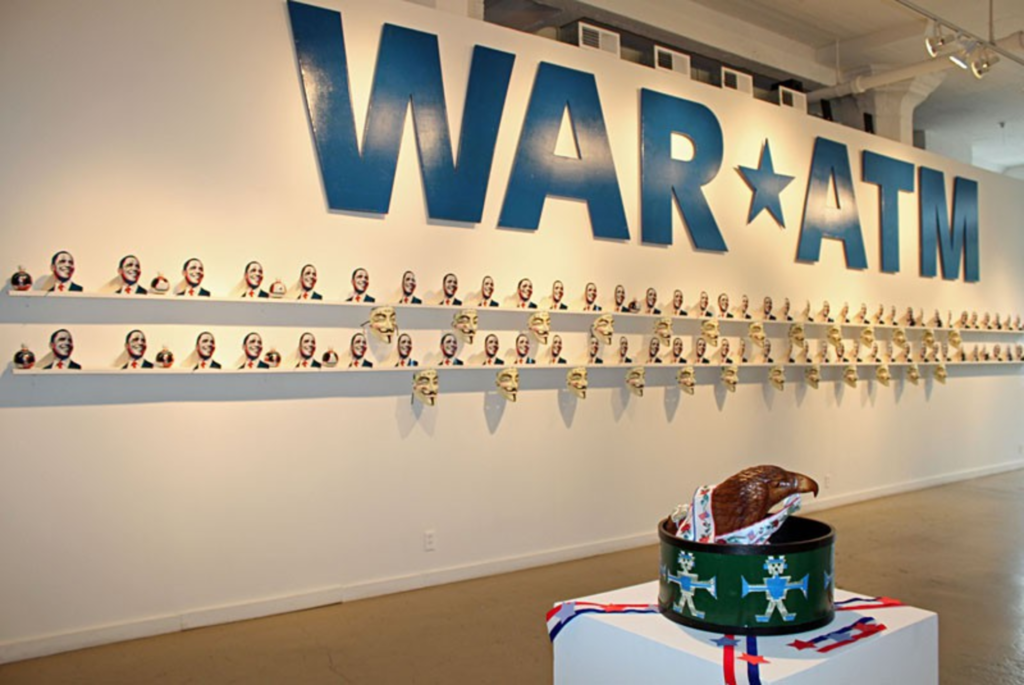 Seventy-two grinning Barack Obamas greet visitors to We Might Be Wrong: Exploring Our Know-it-all Culture.

Paper cutouts from the Shepard Fairey “VOTE” print, the 2008 presidential election’s defining graphic, occupy the wall across from the Leedy-Voulkos entrance, sharing space with V for Vendetta Guy Fawkes masks and Coke bottles with altered labels. Above the two long, horizontal shelves holding these objects hang the blue letters of a Wal-Mart sign, reconfigured to spell “WAR ATM.” (The outcast L hangs by itself on the opposite wall.)

Conflating political and advertising imagery and arranging it repetitively, in ways that further load it, is the basic strategy employed by Don Wilkison, an environmental scientist who makes art under the pseudonym Minister of Information (M.O.I. for short). He appropriates the aggressive visual language of corporate and campaign America to address the country’s most divisive subjects: religion, guns, professional sports, Sarah Palin.

This is M.O.I.’s first gallery exhibition, though he has been making work since 1997. Until now, his efforts have consisted primarily of mail art or public actions. Prominent among these has been “A Tree for Roxy Paine,” for which he planted a tree on the grounds of the Nelson-Atkins Museum of Art near “Ferment,” Roxy Paine’s tree-shaped metal sculpture. (Wilkison’s arboreal statement grew unnoticed for months until it was uprooted by the museum.)

We Might Be Wrong takes a similarly subversive tack but aims at a wider target. He has chosen images that already speak at high volume and has distorted them through amplification and overuse, emptying them of their original rhetoric. There are reverberations of the over-the-top jingoism deployed satirically on The Colbert Report in M.O.I.’s “Always Be Selling,” a sculpture into which he has crammed just about every emotionally charged object he could think of. The altarlike assemblage features a Bible and a Quran side by side, each left open to display the same story, along with a bomb-shaped smiley face and diagrams of airplanes. Posters bearing slogans — “yes we can,” “pray,” “mercy” — hang below, next to images of raised fists and the Statue of Liberty. The piece suggests a Dumpster-diving expedition undertaken just after a Fourth of July parade.

If you’re already tired of this noisy election year, We Might Be Wrong isn’t going to ease your suffering. But the M.O.I. aesthetic isn’t designed to let you off easy — even if, at first look, it’s hard to determine whether Wilkison’s goal is to encourage serious contemplation or merely to irk. (To an impressive degree, he manages both.)

It’s clear, however, that making beautiful or well-crafted objects is not his intent. He’d rather spur conversation.

“For a lot of political issues, we can’t really discuss them in any kind of meaningful way anymore,” Wilkison tells The Pitch. “Why aren’t these kinds of discussions taking place on our local news stations? My hope is that people will talk.”

In that hopeful, bipartisan spirit, he has devoted one corner of the exhibition to work by his daughter, Sarah Star Wilkison. She contributes a simple yet powerful installation and performance titled “Remember the Ladies.” Hand-lettered protest signs — demanding, among other things, “Equal Pay for Equal Work” — rest against the wall. They feel as current as anything else in the gallery, but the messages date from 1776 to 1959. On opening night, performers dressed in costumes reflecting each sign’s historical era stood and held them up. The contrast of words and costuming offered a jolting reminder of how much progress remains to be made in the struggle for equality.

By design, We Might Be Wrong feels overstuffed, sometimes almost oppressively so. The walls are full, and more than a dozen sculptures take up floor space. But the show’s maximal qualities help underscore something apparent from the environmental scientist’s nongallery art: He’s not really an indoor guy.

In a piece that echoes Wilkison’s earlier works, he has lined one wall with photos of the Paseo Academy students recruited to assist his “We Are Here to Plant a Tree” project. There’s no text in the gallery to explain “We Are Here,” and the checklist is inelegant: “Works 28-33 from the project: We Are Here to Plant a Tree.” (Sale proceeds benefit Green Works in KC alumni program, a 501(c)3 sustainability program for urban youth.) There’s more to it, though — Wilkison and his “sustainability assistants,” as he calls his collaborators, have set out to plant trees next month as a form of public art.

Another outdoor M.O.I. performance of recent vintage found new expression here opening night. Erin Olm-Shipman of Bread KC, a micro-granting organization that raises funds for local artists through dinners, was selling pieces of white toast inscribed “U$A” in edible red and blue food coloring. It was a callback to “Git ur all-star mitt here!” — Wilkison’s July bid to hawk pieces of patriotic toast (with peanut butter and honey) on the street during the festivities surrounding Major League Baseball’s All-Star Game. (Proceeds from the sale of his patriotic toast are funneled back to the community through Bread KC.)

The artist, it turns out, is a baseball fan, one acutely concerned with the way that corporations overrun cultural events with heavy commercial promotion. “As a citizen, how can I intervene?” Wilkison says.

That goes for MLB as well as for the GOP — the “mitt” in the title refers not just to the fielder’s glove but also to the Republican presidential candidate. As the artist puts it: “Mitt Romney is as boring as a piece of white toast.”

With We Might Be Wrong, Wilkison looks at how the toast gets made, adopting the aesthetic tactics of corporate and political brands and subverting them through outsized mimicry. At its assertive best, the exhibition singes the toast just right.