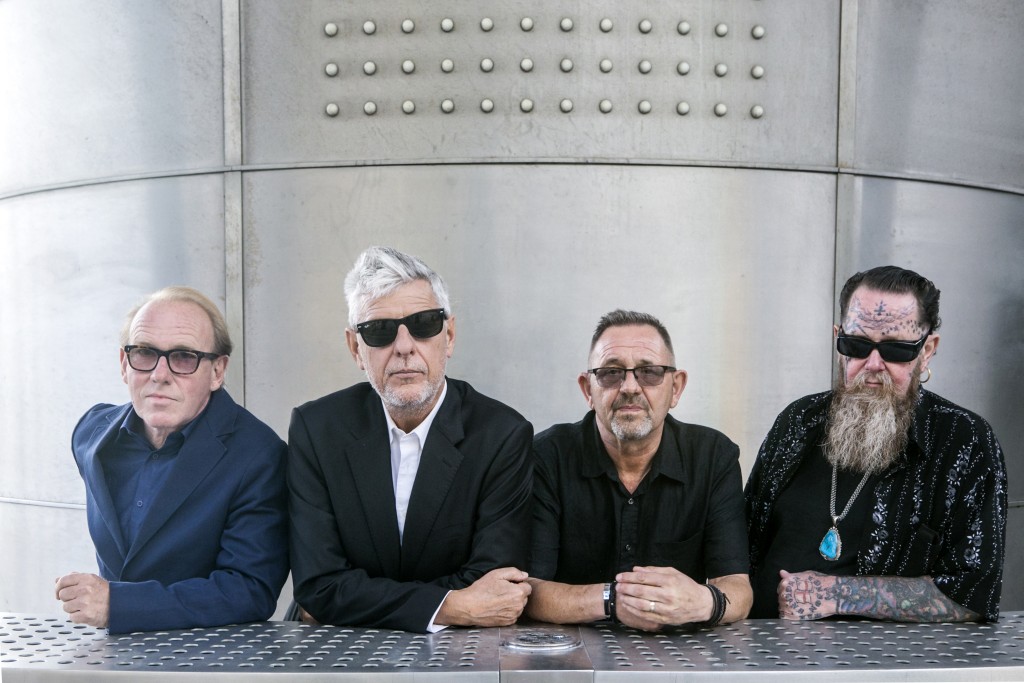 If nothing else, Modern English will forever be remembered for their 1982 single, “I Melt With You.” Thanks to its inclusion in the film Valley Girl (twice!), the song became a massive success and came to define the British band, although their early influences pointed more toward Joy Division than shimmering pop.

In the years since, the band broke and reformed, and is now touring a show wherein they perform After the Snow–the album from which their most-familiar single was taken–in its entirety, along with cuts from throughout their career, including their most recent, Take Me to the Trees, from 2016.

We hopped on the phone with original member and bassist Mick Conroy to discuss all this and more ahead of Modern English’s show at the RecordBar on Friday, June 24.

The Pitch: You’ve performed After the Snow in its entirety before, and even released it as an album on Record Store Day last year, but what’s it like doing it repeatedly?

Mick Conroy: It’s good fun. You know, there are a couple of tracks on the album–“Face of Wood” and “Carry Me Down”–that oddly enough, we never actually played live. Even when the record was released, on tour, we played “Face of Wood” a couple of times before and then it just didn’t fit into the set that we were playing 40 years ago.

So it was, for us, a tiny bit of a challenge as well to master these two songs that just sat on an LP that we didn’t really talk about amongst ourselves, you know? When we decided to do the whole album as a 40th anniversary type thing, we would have to completely focus our attention on learning how to play these two songs that we recorded 40 years ago. We had to listen to these two songs as well, but as it turns out, it is really good, fun playing them because they actually sound quite fresh to us as well.

What are the complications or the tricks to relearning a song that you’d never really played?

Well, for me it was quite easy ’cause I was the person that kind of was on top of all of the music. All I had to do was listen to it and just write it down as it was being played: “Okay, so this happened here, this happens there, it goes into that section.” “Carry Me Down”? The song for Robbie [Grey, vocal] was a bit of a surprise ’cause it there’s loads of verses, so, therefore, there’s loads of lyrics and it was, again, “Oh, wow. Okay.”

“Carry Me Down,” in particular, was written after we’d done some dates in Italy. I always say to Rob, whenever he sings that song, ‘That reminds me of being in Italy 40-odd years ago when we were very young and our first time we were starting to play outside of the UK.”

We’ve spoken with some of your contemporaries over the years, like Tim Butler from the Psychedelic Furs and Terri Nunn from Berlin about having songs featured in films and what that does for one’s career. With Modern English, it’s very interesting because “I Melt with You” had already been released before it was included in Valley Girl. What is it like for you as a musician to have a song that you wrote with one purpose in mind to be featured in something where it’s perhaps disconnected visually from the way it was written?

You kind of hit the nail on the head there. We wrote it with one purpose and that was just to be a song or a track on the LP. When we went in to record the album, we just wanted to make an LP. We didn’t have any idea. We weren’t thinking about singles or individual releases. When Valley Girl happened, I mean–we were still so young. We didn’t really know what was going on When we saw it in the film–you said you spoke to Tim Butler, a mate of mine. Butler was in the Furs and they were in Valley Girl as well. There was a scene where they were on the radio in the bedroom and when I watched the film, I thought, “Wow, you know, the Furs are much bigger than us, so we’re probably in a car driving past on the radio.”

When it got to that scene in the middle, the kind of Romeo and Juliet scene where they wander all over LA and “I Melt with You” comes on, we were all gobsmacked. Our jaws were on the floor, thinking, “This is crazy! They’re playing our song all the way through!” And then of course at the closing credits, you know, then it happened again, it, it was you know, we were just. We were just shocked by the whole affair. We absolutely had no idea that was what was going to happen.

One has to imagine that having it featured once in a film, in a prominent scene, is one thing but then to hear it a second time must be mind-boggling.

Yeah, and of course at the time, the song wasn’t really–it is not like everyone knew it, you know? A lot of people we meet now say the first time they heard that song was seeing Valley Girl.

That song is evidently one of the 500 most-played songs on American radio ever.

Oh no. Is this correct?

For a band from England, such as yourselves, how was your career in your home country versus America?

I mean, it’s that bloody song, you know? When we did “I Melt with You,” in England we were seen as like this doom and gloom type band–you know, post-punk–and our first LP was called Mesh & Lace and it was just us doing what we were doing. With the second album, the press over there was a bit confused because it was so radically different from our first LP.

Then, “I Melt with You” happened in America, and After the Snow started to get quite a good reception. We spent a lot of our time in the ’80s touring in America. It was almost like, “Do we want to play in a rainy Northern town in England on a Tuesday night or do we want to play in Miami?” It was a bit like, “Well, let’s go to Miami.”

In England, we were, a very, very, minor, minor act. People would know us maybe from John Peel’s radio show and doing some John Peel sessions. We weren’t on the charts. We were in the alternative charts, but nothing major. We were on the nighttime radio.

Being on 4AD at that time and, really, at any point in history is quite an achievement for any band.

Yeah. It is an amazing label. Us and Bauhaus were the first–and Rema-Rema, but they recorded the record and then promptly split up. Lovely people, though. But it was us and Baugaus who started, and it went on from there and the years went by. 4AD became a much more amazing label signing the Pixies and the Cocteau Twins and Dead Can Dance and the Color Box and bands like that.

Ivo [Watts-Russell, co-founder of 4AD] was just a really amazing person. He signed the bands because he liked them and liked the music. There was no pressure to do anything from Ivo. He’d basically sign the band and say, “Well, right. There’s the recording studio. Off you go. Good luck,” and then he’d wait until you came home with the finished record and that was how it worked.

Given that it’s been five years since your last album, Take Me to the Trees, is there new music in the works?

Yes. We pretty much have a whole album of music that’s we’ve been riffing over the lockdown periods. In this day and age, you can record at home. I have my own studio, but during lockdown I had to take stuff from the studio home and write. Robbie has the same Programs that I use–Logic, which most bands have–so we would just send files to each other.

You know, “Here’s an idea for a song,” and he’d send it back with his interpretation of it and his vocals, and we just sent stuff backward and forwards to each other. And then, during breaks in the lockdown in the UK, we were all able to get together and play the songs and work them out together as a band as well. Hopefully, we’re going to be recording in September of this year.

Modern English plays the RecordBar on Friday, June 24, with Static Phantoms. Details on that show here.