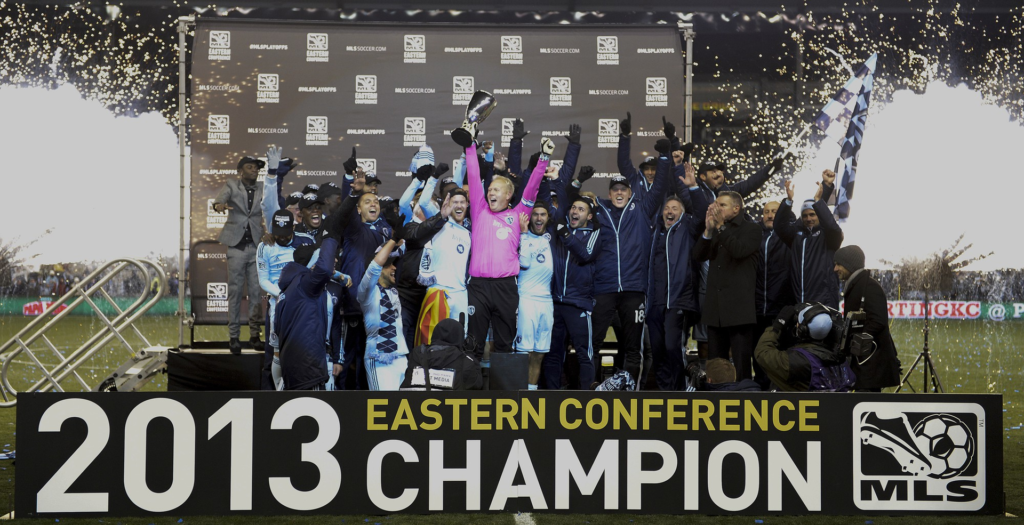 Media coverage in the run-up to Saturday’s Major League Soccer Cup final has focused on the supposed disparity in both teams’ styles of play, when the true differentiator between Sporting Kansas City and Real Salt Lake was the kind of season each team was supposed to have.

Sporting Kansas City on paper started the season looking like one of perhaps three solid bets in the league for a championship team. The resurgent MLS franchise had been the regular-season Eastern Conference champion the previous two seasons, anchored by the league’s best defense when it’s healthy.

Sporting Kansas City’s 2013 campaign started with the addition of two players that looked to shore up some of the team’s persistent weaknesses: a mistake-prone midfield and a misfiring offense. Sporting Kansas City signed midfielder Benny Feilhaber, a player who had once been regarded as a future star in American soccer but struggled in recent years in the MLS. Feilhaber struggled early in the season but emerged later on as a reliable shepherd of Sporting Kansas City’s midfield who was good for an occasional goal.

The team also spent big bucks to land Argentinian striker Claudio Bieler, who figured to be the type of clinical goal scorer who could reverse Sporting Kansas City’s well-documented problem of heaping numerous attempts at the opposing team’s goal, but scoring on very few of the opportunities.

Despite those additions, it’s fair to say Sporting Kansas City’s on-field performance didn’t live up to the promise the team showed on paper for the first two-thirds of the season. The team was bedeviled by losses, particularly at home, to inferior teams. This wasn’t the Sporting Kansas City club of 2012 that had a screaming start to its season, winning the first seven matches of the season. Injuries played a role in the team’s bumpy start, too.

But it’s usually better to end the season well than to start it in style. Sporting Kansas City transformed from an inconsistent squad at best at the midway point of the season into a powerful club toward the end, winning six of its last eight games and losing only one.

Real Salt Lake’s season was a different story. The day after losing in the 2012 playoffs to the Seattle Sounders, Real Salt Lake looked like the type of team poised for a deep playoff run in 2013.

Then the team got rid of arguably three of its best players during the offseason. It sent defender Will Johnson to the Portland Timbers. This year, he was deemed the best player at this position in the league. Also gone were Fabian Espindola and Jamison Olave in a trade to the New York Red Bulls, a move that spared costs for Real Salt Lake and made the Red Bulls slightly better in the regular season than Sporting Kansas City.

For what looked like a rebuilding year, Real Salt Lake defied soccer commentators by remaining near the top of the Western Conference standings for the entire season. They also made it to the final of the U.S. Open Cup, a separate but parallel tournament that Sporting Kansas City won last year, but lost to terrible D.C. United in a huge upset.

Sporting Kansas City plays fairly slick with a midfield apt at smart passes and promising crosses, while at the same time holding down defensively without normally using remarkable force. Defender Aurélien Collin is a bone crusher, but the rest of his team is not particularly brutish.

The big question in this game: Does Real Salt Lake have the offensive cavalry to outfox a clearly superior Sporting Kansas City defense? Real Salt Lake can deploy a potent offense, having scored more goals during the regular season than any team aside from the Red Bulls. However, when Sporting Kansas City plays defenders Chance Myers, Matt Besler, Collin and Seth Sinovic together, as they’re expected to on Saturday, they’re the toughest back line in the MLS.

Real Salt Lake got some good news this week when its injury report said its forward Alvaro Saborio is probable for the final. Saborio has scored 12 goals for Real Salt Lake this year but was hampered by injury problems in earlier playoff games. Real Salt Lake has managed to spread the goal scoring around in his absence with five different players scoring a goal or more in their four playoff games.

(Sporting Kansas City’s injury report isn’t remarkable, except for the expected absence of Lawrence Olum, an occasional defender and midfielder who would be on the margin for getting playing time if he were healthy.)

Still, this is a game that Sporting Kansas City should win. Their offense has overwhelmed playoff opponents when coach Peter Vermes sends them on the attack. They’re almost certain to score a goal and probably could net one more. Real Salt Lake’s defense isn’t exceptional. Their goalkeeper, Nick Rimando, has bailed them out plenty over the course of this season. That puts a lot of pressure on Real Salt Lake’s attack to overcome a powerful Sporting Kansas City defense.

(For you betting types, Sporting Kansas City is listed as a heavy favorite by one of the only Las Vegas bookmakers that will write an MLS bet.)

Sporting Kansas City is playing determined soccer late in the year, rather than desperate soccer, like the previous two playoff years.

They should win this game.