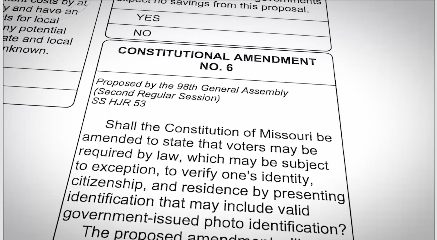 There has been one — one! — voter-impersonation fraud case in the history of Missouri. Secretary of State Jay Ashcroft, a Republican, even acknowledged that fact earlier this week. Ashcroft has been touring the state, trying to explain to people how a new voter-ID law, passed last year, will change the voting process for Missourians. He’s bringing a handy flowchart around with him, which has prompted tweets such as this one:

Ashcroft skipped Kansas City, but the St. Louis stop on the “informational tour” didn’t seem to go so hot. From the St. Louis Post-Dispatch:

Some audience members brought up the question of why the law was necessary in the first place, prompting Ashcroft to rattle off a litany of verified voter-fraud anecdotes — most of which involved purchasing of votes, voting in the wrong jurisdiction and other issues that aren’t addressed by the new law.

Under persistent questioning, he ultimately acknowledged that the one Missouri case of voter-impersonation fraud that he cited was in fact the only one he was prepared to cite.

“It seems to me that if there’s basically one case … I think that’s insufficient justification for a law like this,” said Louise Wilkerson, one of the League of Women Voters members present at the meeting. “I am concerned that those people who don’t have a government-issued ID will be discouraged” from voting.

As with all voter-ID laws, Missouri’s was championed by Republicans and will disproportionately affect low-income and minority voters. It officially took effect June 1.

Thursday night, the ACLU of Missouri and racial justice group the Advancement Project called bullshit on the way the new law is being handled, filing a lawsuit charging that the state has “failed to provide mandated funding for voter education, free voter IDs and birth certificates, and training of poll workers.”

As the ACLU notes in a release:

The measure…mandates that the state fully fund all costs associated with implementing the law, including costs for related public education, free voter IDs and birth certificates, and training of poll workers. To date, the state has appropriated just a fraction of the amount necessary to cover these costs, even as local and state elections loom.

“Voters were promised that this law was not about disenfranchising the most vulnerable in our state,” said Tony Rothert, legal director of the ACLU of Missouri, in a statement. “The state’s lack of funding and implementation of this law tells another story.”

The lawsuit seeks a halt on the law in light of an upcoming municipal election in St. Louis. It alleges that implementing the law “imposes new responsibilities on local election authorities who will experience increased costs as a result.” The Kansas City Board of Elections has estimated added costs of $160,000. The lawsuit says state law does not provide for reimbursements for the costs of implementation.

Similar voter ID laws have been struck down by the courts in other states recently, including Texas.

You can read the complaint, which was filed in Cole County on behalf of the NAACP and the League of Women Voters, here.