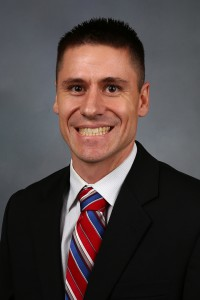 A Missouri state senator reduced children who identify as another gender to an episode of Kids Say the Darndest Things.

On Tuesday, the Senate’s education committee heard testimony on Senate Bill 98, which would prevent children in public schools from using bathrooms and locker rooms that don’t correspond to their “biological sex.”

The bill is opposed by groups like PROMO, a statewide LGBT organization. Elizabeth Fuchs, PROMO’s public policy manager, warned the committee that the bill puts transgender students at increased risk for harassment, bullying and violence.

After Fuchs testified, state Sen. Andrew Koenig, a Republican who represents St. Louis County, spoke. Koenig noted that he is a father as well as a foster care parent.

“Kids say funny things,” Koenig said. “‘I want to be a girl or I want to be a dog.’ Who knows what they’ll say? But that doesn’t mean I turn around and try to cultivate that and say, ‘Yes, you can be a dog.’”

He added: “At the age of 5, 6, 7, is it appropriate to cultivate something that they genetically are not?”

What Koenig calls “cultivating,” the American Academy of Pediatrics calls responding in an affirming, supportive way. Here’s a passage from the academy’s web page on gender nonconforming and transgender children:

For some young children, expressing a wish to be or identifying as another gender may be temporary; for others, it is not. Only time will tell. Some children who are gender non-conforming in early childhood grow up to become transgender adults (persistently identifying with a gender that is different from their birth sex), and others do not. Many gender non-conforming children grow up to identify with a gay, lesbian, or bisexual sexual orientation (i.e. attracted to the same or both genders as opposed to feeling they are a different gender).

The academy acknowledges that having a gender non-conforming child can be stressful for parents and caregivers. But rather than dismiss as silly a child who identifies as a different gender, the academy says it is important for parents to make their home a place where their child feels safe and loved unconditionally.

And that’s the more you know!