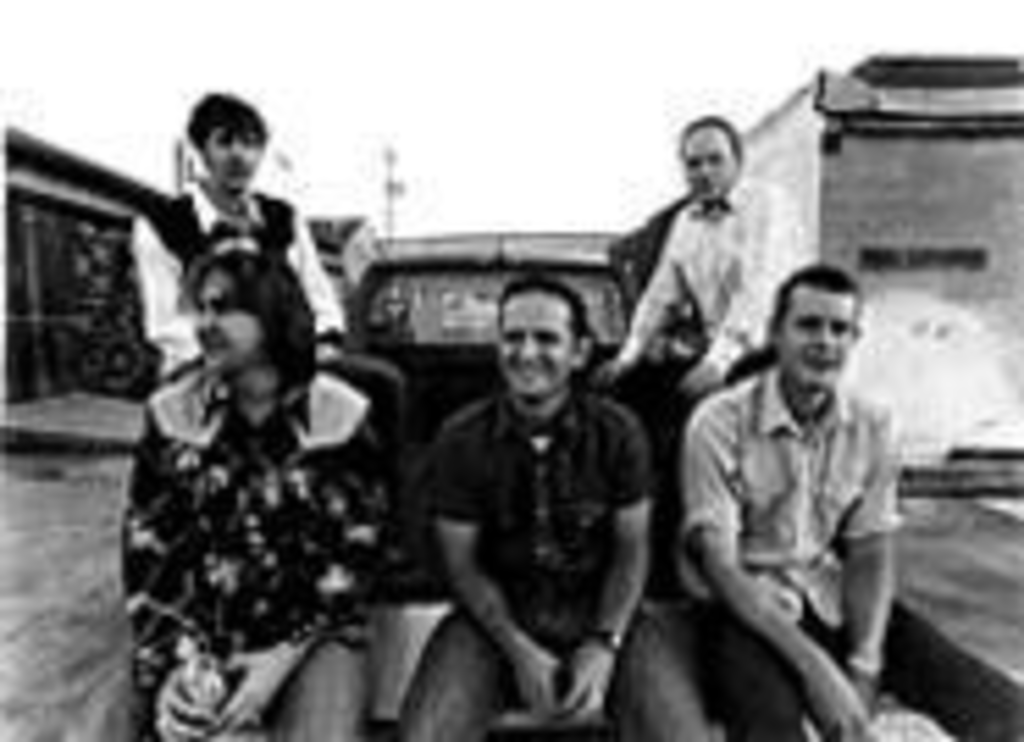 Life is miserable here in the New Mexico desert. It’s cold, dark and absurdly quiet. The only sound comes from the radio — Rex Hobart quietly singing, Baby, don’t you make me break your heart — while the windshield wipers lazily sweep spatters of rain onto the barren asphalt of Route 14.

It’s a perfect night for heartache. And Hobart is happy to oblige.

The asphalt turns to gravel, and then a lone building — painted into a corner between Interstate 25 and the dark void of unbroken desert — emerges in the glare of the high beams. This is it. The Santa Fe Brewing Company. This is where heartache will bed down for the night and where Hobart will sing it to sleep.

Inside, it looks more like a homesteader’s living room than a brewery. People sit beside a roaring fireplace that crackles whenever the bartender feeds broken peanut shells into its maw. Oxen yokes and horse bridles hang from the wall. Blue Christmas lights are strewn from the ceiling. A large contingent of the Santa Fe Rugby Club sits on bar stools, chortling loudly and swilling pints of Chicken Killer, a potent house specialty that could murder poultry with ease.

A lean man in a red long-sleeved shirt and black pants with rhinestones up each side stands in the corner, keeping time with his right boot as he strums a guitar and croons, I got to get back to forgetting you …

“Hey, now!” the man calls to the crowd when the song finishes. “I’m Rex Hobart, and these are the Misery Boys.”

A few patrons stop chewing to eye Hobart skeptically. He is standing alone. Just him, black rhinestone pants and an acoustic guitar. The closest Misery Boy is nearly 900 miles away. It’s a playful, heartfelt gesture that suggests Hobart isn’t a complete man without his Boys.

Not that they haven’t been estranged a time or two. Like now, for instance. Hobart has called Santa Fe home for six months. Before that, it was Buffalo, New York. But the man and his band are inextricably linked to one place.

“If anyone asks, I tell them I’m from Kansas City,” Hobart tells the Pitch. “You like to think of yourself as a national act, and I do, but as far as a home base goes, that’s Kansas City. Whenever I come back and see the skyline driving in from the north, that always induces a little wistfulness.”

Hobart and the Misery Boys are prone to such sentimentality. The band’s latest album, Empty House, bursts with tales of brokenhearted woe delivered with a tear on the cheek and a bottle in the hand.

But you know better. You know that Hobart didn’t saunter through honky-tonk’s swinging doors with his boots on. You know he didn’t even amble in as Rex Hobart.

A decade ago, Scott Christian Hobart was the heart and scowl of Giant’s Chair, a hard-edged Kansas City progressive-rock band. But when Giant’s Chair collapsed in 1997, Hobart returned to his small-town Missouri roots to form Rex Hobart and the Misery Boys.

“If it’s a good melody, whether it comes from a lot of distortion or an acoustic guitar, it’s still a good melody,” Hobart says. “Country music was appealing to me because it was a simple form — or at least that’s what I thought. There is more to this kind of songwriting than a lot of people think. It’s about efficiency, trying to say the most with the fewest words possible.”

In seven years, the band has said enough to fill four discs on Bloodshot Records and earn a fervent following in the Midwest and beyond — despite lengthy downtime caused in part by geographic separation and fiery tempers only brothers can share.

“I’ve quit the band at least twice,” guitarist J.B. Morris says, laughing. “It’s always at the end of the night, when you’ve had too much to drink and maybe you didn’t play your best and guys are frustrated and you’re like, ‘That’s it. I quit.’ But it’s never serious. We may be two and a half hours away from home when you quit, and by the time we’re home, you’re back in the band.”

But they don’t call them the Misery Boys for nothing. Empty House is more somber than the upbeat dance-first-cry-later material that has made the band a raucous live draw. Rough emotions are delivered with subtle flair on tracks that are as painful as they are cathartic, particularly “Let’s Leave Me,” “I Don’t Like That Mirror” and “Heartache to Hide.”

The Misery Boys gathered to churn out those emotions in a cold downtown Kansas City warehouse during the winter of 2003. For the first time, the band handled an album’s production itself (along with engineer Chad Meise), recording Empty House completely on analog in a matter of days.

“I think we did it honestly,” Morris says. “We wanted to take a different road than the previous album [Your Favorite Fool], which was really polished and pretty slick. We wanted to dry it out and do a record like they did 25 years ago.”

Problem was, it seemed to take 25 years for the album to see the light of day. The band sat in limbo while Hobart lingered in the News (York and Mexico), and Bloodshot stalled the album’s release several times in 2004 before unveiling it on February 22.

“We’ve had a lot of boots pushed in our faces,” Morris says. “When nothing happens, no matter how hard you try, you start to wonder if maybe you’re not the band you thought you were.”

But Hobart and Morris are eager to hit the road again in support of the album. And whatever heartache may come, they insist that Empty House won’t leave behind an empty home.