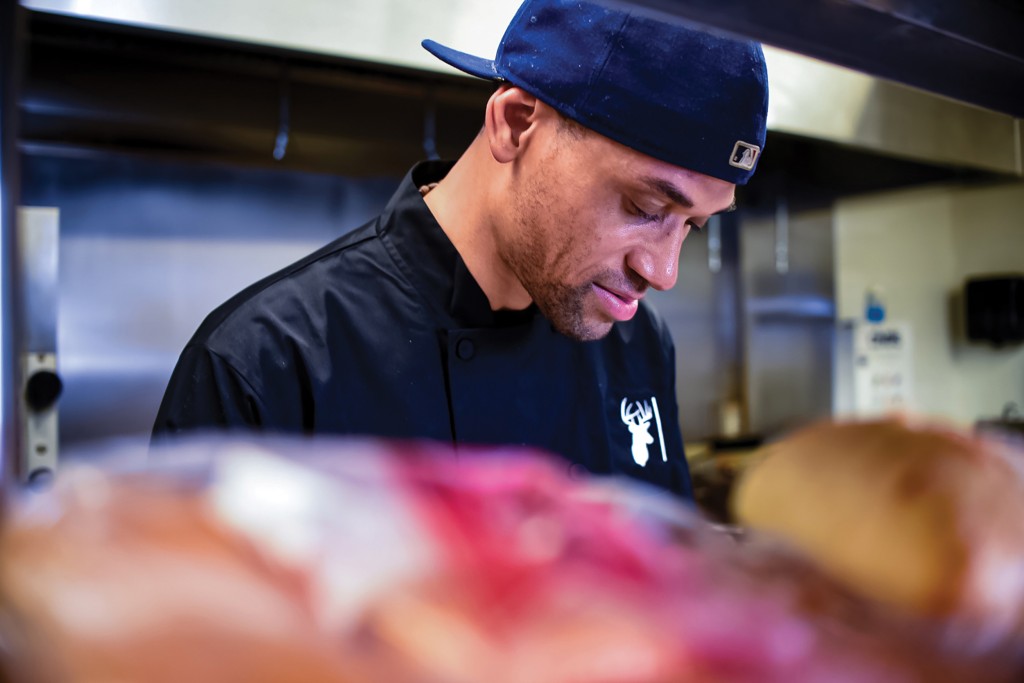 Mark Jones believes that the key to good cooking is in keeping it simple.

He’s the Wolfgang Puck-trained executive chef of Black Stag, a brewery on Lawrence’s beloved Massachusetts Street where he nurtures his creative instincts in the kitchen and encourages his staff to do the same.

Below, he dives into his journey from West Coast to No Coast, his love for ramen noodles, and always having beer on the brain.

The Pitch: Tell us more about your culinary background. What led you to Black Stag?

Mark Jones: I’m a classically trained culinary professional who went to school at Le Cordon Bleu College of Culinary Arts in Los Angeles. I worked jobs in [hospitality] and entertainment before and after culinary school—catering, restaurants, temp work, and grocery stores.

My journey [began] when I was working at Wolfgang Puck Catering, which I started a few weeks before catering events for the Oscars. Wolfgang Puck really taught me to honor the ingredients and that presentation is everything. Everything needs to be done with haste and care.

Los Angeles has so much good food, but it’s really packed. I came back [to the Midwest] because I wanted to be closer to my family. Los Angeles is so expensive, and I saw an opportunity to pave my way as a chef. An acquaintance recommended I look into working at Black Stag, and the executive chef at the time mentioned he was really impressed with my resume and experience.

I started working there in January and became the new executive chef shortly after Valentine’s Day.

What stands out about Black Stag? What should people order when they visit?

[It’s] roomy and beautiful. The Founder’s Room is a great place for catered events. The outdoor patio is nice for fresh air, people watching, and parades. The food goes great with the beer, and it’s fun to watch our brewers make the beer on-site. I enjoy getting a steam bath with our open floor plan.

It’s hard to pick just one dish, but people should definitely order a steak. We use certified Angus beef and butcher our steaks in-house, keeping a purist philosophy in preparing them by using salt, pepper, and butter.

We also do steak frites now with chimichurri and roasted Japanese sweet potato. It’s made using skirt steak, a lesser-known cut that I love because it’s actually the cut of the primal that’s used to grade the entire cow.

How would you describe your food philosophy when it comes to cooking?

I let the food speak to me. I like to start with great ingredients, and I don’t have to do much but create what is at the center of every plate. I try to create balance with my dishes. Being a “from scratch” kitchen, I encourage the staff by giving them freedom to create “specials,” but with guidance. I love for flavors to play off of each other.

How do you work what’s on tap into your dishes?

I’m always thinking about the entire dish and then talking to the brewers, Alex and John. The goal is to find which of their craft beers might accent or complement the featured dish.

I like different textures, and I want those flavors to have balance or contrast. I did a pork chili with the C3PO beer, which has notes of chipotle in it. So, instead of adding a bunch of spices to make a super hot chili, I let the beer do that for me.

What’s been your go-to takeout recently? What do you like to whip up at home?

I love ramen. Lately, it’s been Ramen Bowls. I get the Tonkotsu shoyu ramen with extra noodles and extra green onion with corn. At home, I always have bucatini on hand. I love a thick, chewy noodle. I like to add togarashi, good olive oil, and Kosher salt.

Are there any dishes that have been knocking your socks off lately?

What and where will you be drinking this summer?

​​I really love the pineapple vodka at the Capital Grille on the Plaza. It’ll get you though. It’s so delicious that I’m going to infuse vodka with pineapple at home this summer. I’ll also be drinking the Sangria at Henry’s in Lawrence.