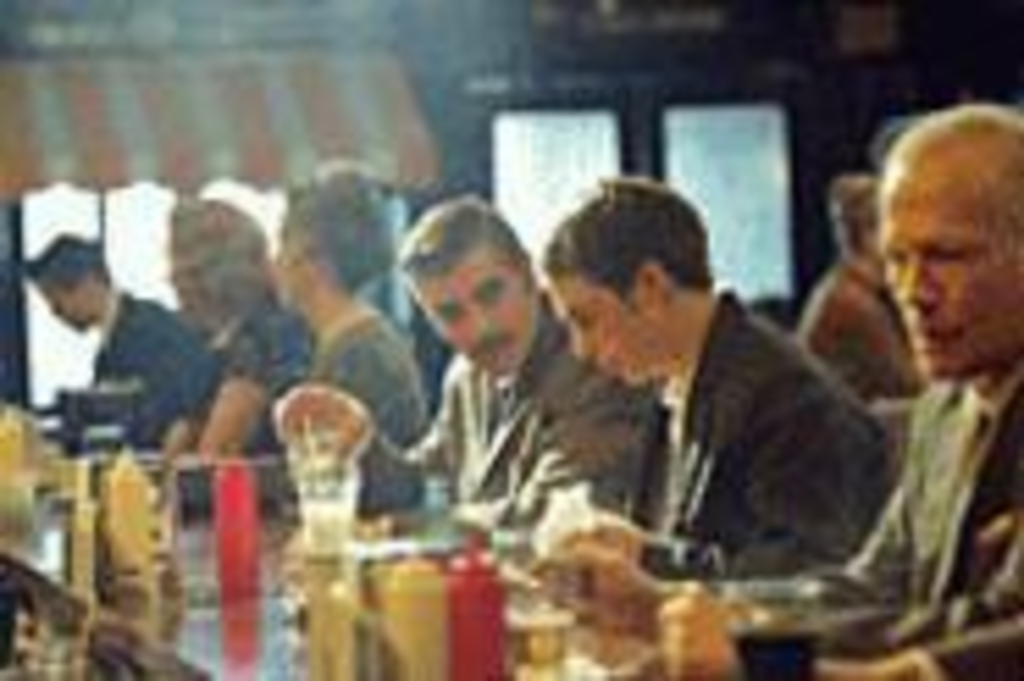 In the cold light of day, the sum of Chuck Barris’ contributions to American culture are the 1962 Top 40 ditty “Palisades Park” and his discovery, a few years later, that many people are willing to make complete fools of themselves in front of a TV camera. Barris’ legacy includes such pre-Springer, pre-Survivor humiliation-fests as The Newlywed Game, The Gong Show and The $1.98 Beauty Show. Give him credit for timely instinct; he transformed the public degradation of ordinary citizens into a pop phenomenon before anyone else thought of it.

Barris also fancies himself a writer, and among his three ill-conceived books is the 1982 volume that’s the basis for actor George Clooney’s startlingly impressive debut as a movie director, Confessions of a Dangerous Mind. Barris claims that Confessions is a nonfiction memoir. Most people, though — including, obviously, Clooney and screenwriter Charlie Kaufman — regard it as sheer fantasy. The bone of contention is not slight. Barris would have us believe that he was once a trained CIA killer who, when he wasn’t producing TV shows, assassinated enemy operatives in exotic world capitals like Helsinki, West Berlin and Mexico City.

The moviemakers have cleverly parlayed Barris’ quaint fiction into a fascinating, frequently hilarious meditation on delusion, self-loathing and personal salesmanship. They’ve also executed a deft burlesque on the lowbrow excesses of TV in the ’70s, of which Barris was clearly the personification.

As interpreted by Clooney and Kaufman (Being John Malkovich, Adaptation), Barris is a hustler so committed to his con that he falls for it himself. Credited as “consultant” to the production, the retired TV star hung around the set and eagerly answered the filmmakers’ questions. Does he have any idea how they’ve blindsided him? If so, does he care?

As portrayed by Sam Rockwell (Welcome to Collinwood, Heist), Barris is one of the creepiest movie characters in memory — a pathological liar and crass opportunist who shoved his way into the television industry, then trampled friends and foes alike for fleeting fame and success. The Dating Game boils up from his cheap, skirt-chasing fantasies, The Gong Show (on which incompetent show-biz dreamers were booed off the set) from his own deep self-hatred.

But Barris’ self-aggrandizing James Bond fantasy is the most bizarre thing here. With great skill and scary wit, Clooney, Kaufman and Rockwell get inside Barris’ disordered brain and give free rein to his imagined secret missions. Under the tutelage of a CIA recruiter named Jim (Clooney), Barris kills a mustachioed bigwig in the shimmering heat of Mexico City, offs a dangerous Commie in snowy Helsinki and puts his head together with a philosophical secret agent (Rutger Hauer) in Cold War Berlin. Wearing a series of foreign-intrigue wigs, a luscious Julia Roberts slinks through the international shadows as the mysterious femme fatale Patricia, who quotes Nabokov from memory, speaks four or five languages and, naturally, has the hots for our boy.

Clooney indulges cinematographer Newton Thomas Sigel in a lot of tricked-up effects — infrared this, desaturated-color that — meant to signal distorted states of mind and heightened paranoia. Sharp acting does the job just as well. Yet despite its excesses, Confessions comes off as a brilliant and unsettling comedy about one twisted dreamer’s outrageous fantasies and how he tried to sell them to the world — and to himself. On the surface, the film affects an air of ambiguity about Barris’ claims, but in the end we know where he stands.

Always attuned to his next opportunity, Barris has another book in the works, scheduled for publication next year. The title? Bad Grass Never Dies: More Confessions of a Dangerous Mind. It’s a good bet the old hustler is already counting the take.