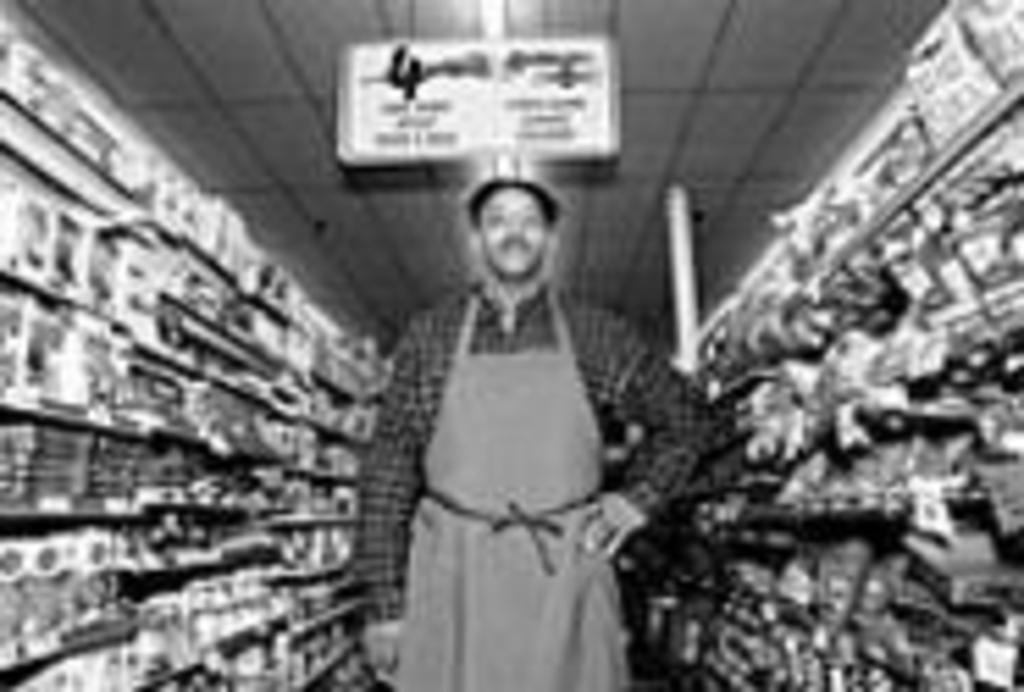 The squat strip along 39th Street between Kensington and Elmwood boasts a laundromat, a barbershop and salon, and a liquor store, along with its anchor, Leon’s Thriftway grocery store.

Until recently, though, Leon’s and its neighboring businesses faced extinction. The Kansas City Neighborhood Alliance had proposed to tear down the whole strip to make way for new, affordable housing and a community center. But with its plan, the KCNA, a generally respected community-development corporation, betrayed its name and made more enemies than alliances.

Despite the results of a KCNA-ordered “blight study,” which found it plagued by unsanitary and unsafe conditions, the shopping center is a scene of constant motion: Cars with spinning, platinum hubcaps glide past beaters as their drivers pull in to get their hair done or their clothes cleaned or to pick up something from Leon’s. In the aisles of the grocery store, men wearing shined, two-toned shoes pass women wearing house slippers. The place is busy at 3 p.m. On a weekday.

Leon Stapleton opened Leon’s Thriftway in the summer of 1969, after riots followed Martin Luther King Jr.’s assassination and Kansas City’s Black Economic Union started demanding more opportunities for African-American entrepreneurs. Stapleton and his wife had five girls and two boys, and the store was intended to secure the family’s future. Vernon Stapleton and his sister Alfreda run the place now, but when the 79-year-old Leon says he’s retired, his children laugh. He’s at the store every day.

Unlike now-standard 60,000-square-foot Price Choppers, Leon’s takes up just 18,000 square feet, prevailing among an aging but loyal customer base because it’s the only grocery store for miles on Kansas City’s east side. Though it’s not the rotting wasteland described in the KCNA’s blight study, the strip’s parking lot is crumbling, the building’s façade is shabby, and refrigerators in Leon’s meat and frozen food aisles are antiquated. Stapleton and his landlord, James Houston Jr., knew it was time to spruce up the place.

Houston says that in November 2003, he presented the city with plans for a complete renovation and expansion of the center.

Not long afterward, Houston says, he and Stapleton discovered that the KCNA, along with Swope Community Builders and the Planned Industrial Expansion Authority (a quasi-public board with powers of eminent domain), also had plans for the Seven Oaks Shopping Center — but they had neglected to tell Houston.

Stapleton learned of the KCNA’s plan from Marilyn Simmons, a Kansas City, Missouri, School Board representative and a one-time member of the Vineyard Neighborhood Association. Simmons, a longtime Leon’s shopper, had been invited to a meeting at the office of Swope Community Builders back in 2001, when the KCNA outlined its vision for the block. Simmons says she was surprised when a map of the proposal showed a new housing development and community center on the land occupied by Leon’s Thriftway. Simmons recalls that someone at the meeting referred to Houston as a “slumlord,” and says Leon’s was shrugged off as a store that sold “green meat and brown vegetables” and generated its main income from liquor sales.

“I said, ‘That’s just not true,'” Simmons recalls. “The project, I felt, was mean-spirited, and plus it represented no profit for my community.”

KCNA Executive Director Gloria Eurotas tells the Pitch that her agency first became involved in the Oak Pointe Development in order to bail out another community development corporation, the CDC of KC, which owned the crime-plagued Seven Oaks Apartments behind Leon’s. The federal department of Housing and Urban Development held the mortgage insurance, and the complex faced foreclosure, so HUD sold the apartments to the KCNA for $10 on the condition that the KCNA handle their demolition.

KCNA officials realized they could get a better return on their efforts if they took control of the whole block and built more housing. HUD offered to contribute $2.32 million toward the KCNA’s projected $15.5 million cost, which included 106 units of new housing (up from 78 in the previous complex) and a 5,000-square-foot community center with computer labs and a community policing office. HUD could boast of its participation in a federal program in which construction workers would be hired from nearby neighborhoods, keeping the money in the community where it was being spent. Chuck Gatson, CEO of Swope Community Builders, signed on as a development consultant.

Houston says he never received a letter of notification from the entities interested in his property, an assertion that the KCNA disputes. “Many notifications were sent on KCNA’s behalf to all the property owners, commercial and residential,” Eurotas says. “We had to work with all of [Houston’s] tenants, too.”

The Oak Pointe Development was to be the biggest project ever initiated by the KCNA. “A few loud voices swayed the support we had,” Eurotas says.

None of those voices, she says, protested the KCNA’s plan when it was winding through a conduit of city meetings for final approval. No neighborhood residents showed up for the City Planning Commission’s meetings on the issue, Eurotas and Gatson point out. And at the Planning, Zoning and Economic Development Committee meeting, where an ordinance rezoned the whole block for the KCNA’s purposes, no one objected. After that was a City Council meeting that Eurotas calls a “lovefest, with hugs for everyone,” where the mayor and the council applauded the plan. The city pledged to add $1.9 million to HUD’s $2.32 million. During all these city meetings, Eurotas and Gatson say, they were under the impression that they had the community’s full support.

But Simmons and the Stapletons suggest that the developers deliberately misled their neighbors. Simmons says that if she hadn’t seen the plans at the 2001 meeting, no one would know that the KCNA intended to tear down the strip mall until it was too late. She says she kept going to meetings and reporting back to the Stapletons, who didn’t initially believe that someone intended to take their property. By 2002, however, Alfreda Stapleton was attending the neighborhood meetings as well.

When neighbors asked what would happen to the businesses in the Seven Oaks strip, KCNA representatives described the plan as still malleable, Simmons says.

And when it came time to negotiate with the Stapletons, Gatson offered them the opportunity to run a brand-new, multi-thousand-square-foot store scheduled to be built on Blue Parkway.

“That was too big for us,” Vernon tells the Pitch. “We don’t know anything about running a big store like that. We wanted what we were comfortable with. We did think about it, and we told him [Gatson] no.”

After rejecting those offers, Vernon recalls, the Stapletons received letters from the KCNA that they interpreted as vaguely threatening. “They said, ‘Settle now, while we’re offering this, or we’ll come through with eminent domain and you won’t get anything better than market value.’ It was back and forth for a number of years.”

“KCNA has done good work in and around our community,” Alfreda Stapleton adds. “We didn’t intend for them to be demonized. We just wanted to be left alone to sell milk and bread.”

Eurotas and Gatson maintain that they were upfront with the neighborhoods in numerous meetings before the July 16, 2004, meeting of the Planned Industrial Expansion Authority, when the neighborhood’s opposition became undeniable. PIEA meetings are generally quiet, routine affairs. There’s rarely an audience. But when PIEA was set to declare the KCNA as the Oak Pointe developer, a contentious group of residents showed up in support of Leon’s.

PIEA rejected the KCNA as the developer, effectively killing the project.

“The tragedy of it all is that they [the KCNA and Swope Community Builders] refused to reconfigure the plan to accommodate the community,” Edwards says.

Last month, Houston finally got the city’s approval for his own renovation plans.

“We were dumbstruck,” Eurotas says of the KCNA project’s failure. “Everything we did was aboveboard and with integrity. But we’re not about pushing and railroading. You don’t want us? We’ll go away.”

She and Gatson are clearly bitter, though. “Now I own that piece of dirt,” Eurotas says of the empty lot where the old Seven Oaks Apartments stood. “Everyone loses. The city lost, the neighborhood lost all this investment, and we lost a development opportunity.”

Actually, the people shopping at Leon’s don’t look like losers. But one other loss may be imminent.

In front of Leon’s on January 1, Simmons announced her candidacy in the upcoming election to recall City Councilwoman Saundra McFadden-Weaver.

Third District residents criticized McFadden-Weaver for supporting the Oak Pointe Development long past the time when many of them were protesting the KCNA’s plan. Several of McFadden-Weaver’s political foes turned up at meetings to blast her involvement with the development; among those was her former 3rd District seat opponent Ron Finley, who serves as Stapleton’s legal council, and Clinton Adams, who appeared at the PIEA meeting as Houston’s lawyer (see David Martin’s “The Grudge Report,” January 6). Simmons says McFadden-Weaver lost the petitions that were given to her with thousands of signatures supporting Leon’s.

Charles Brown, who owns the strip mall’s barbershop, says he will remember McFadden-Weaver — not the KCNA — as the one who threatened his business. He has watched a videotape of the April 14, 2004, Planning, Zoning and Economic Development Committee meeting at which the Oak Pointe Development was praised. “Saundra’s running her mouth, and Troy Nash is co-signing it,” he says, calling the ordeal “black-on-black crime perpetrated by our elected officials.”

Simmons can count on a few votes from elsewhere in the strip, too. “We’d back her up,” Vernon Stapleton says of Simmons. “She helped us out a lot.”