For more photos, check out our slideshow here.

Few have risen from child star to pop infamy in quite the way that Miley Cyrus has. While it was easy to ignore as an adult (at least for me), the Hannah Montana character was a truly massive thing, and the fame that Cyrus had at a formative age shouldn’t be underestimated. That Disney career of hers was probably as tightly overmanaged as they come, and is likely a part of the relatively extreme 180-degree shift she’s made. Cyrus signaled her adulthood and independence with her latest album, Bangerz, flaunting a sort of sexual freedom and a major “It’s my life” attitude.

I get it. But none of that makes Cyrus’ Bangerz Tour any less cringey or awkward to watch as you stand among thousands of teens and their moms.

All those girls in the audience last night had been waiting; the Sprint Center show was a rescheduled one. Last April, Cyrus suffered a severe allergic reaction to the antibiotic cephalexin, and was hospitalized at KU Medical Center St. Luke’s Hospital for a handful of days while she recovered. And last night, she (or something technical) kept the audience waiting for about 35 minutes past set time for the show to start. But as the lights went down, shrill shrieks rang out, the stimulus began and didn’t cease for another two hours.

The huge LED screen behind the stage lit up with a rising image of Cyrus’ face, eyes moving around, appearing to look around at the audience. The Cyrusbot mouth then opened, and the now-infamous tongue crept out of it, becoming a slide that Cyrus used to come on to the stage. I’m not the biggest fan of her flashing tongue (I glare at the billboard of her with her tongue out every day on I-70 near downtown), but it was still a pretty great entrance. 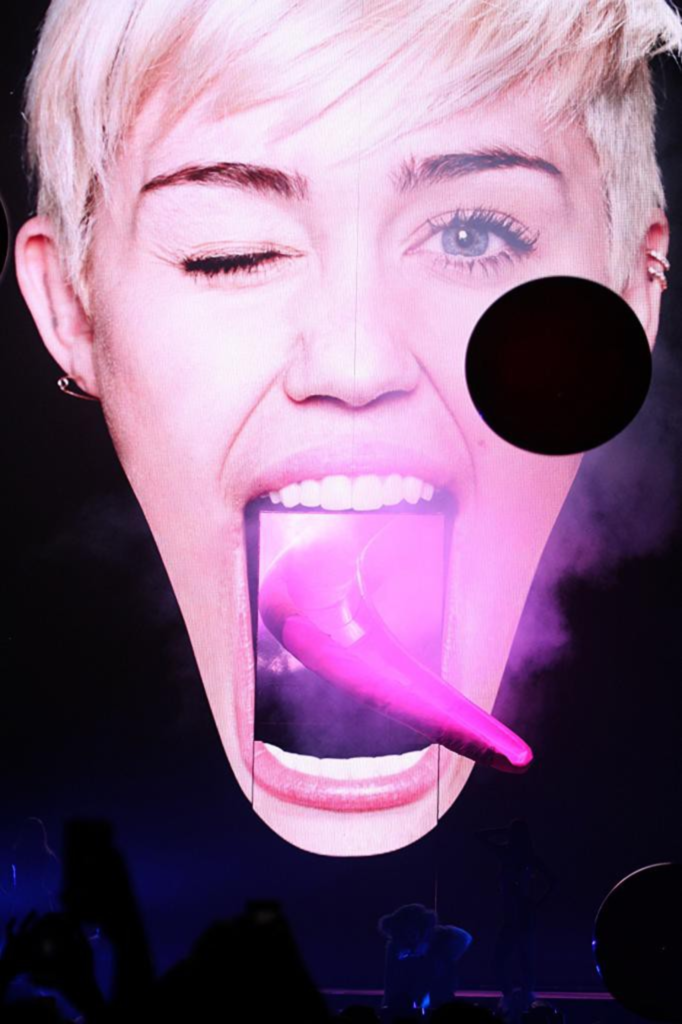 The first three songs made for a chaotic, frenetic mash of sound, costume and dance. It was visually spectacular, if not totally incoherent thematically. Dancers in furry animal costumes gyrated behind Cyrus. Miley, a 7-foot-tall woman (drag queen?) and a little person filtered out among other dancers, who were dressed in tight gingham. Lights flashed, bass blared, lots of asses jiggled. Cyrus rapped. It was absolutely frenetic – and the crowd, essentially 95 percent female, went apeshit. 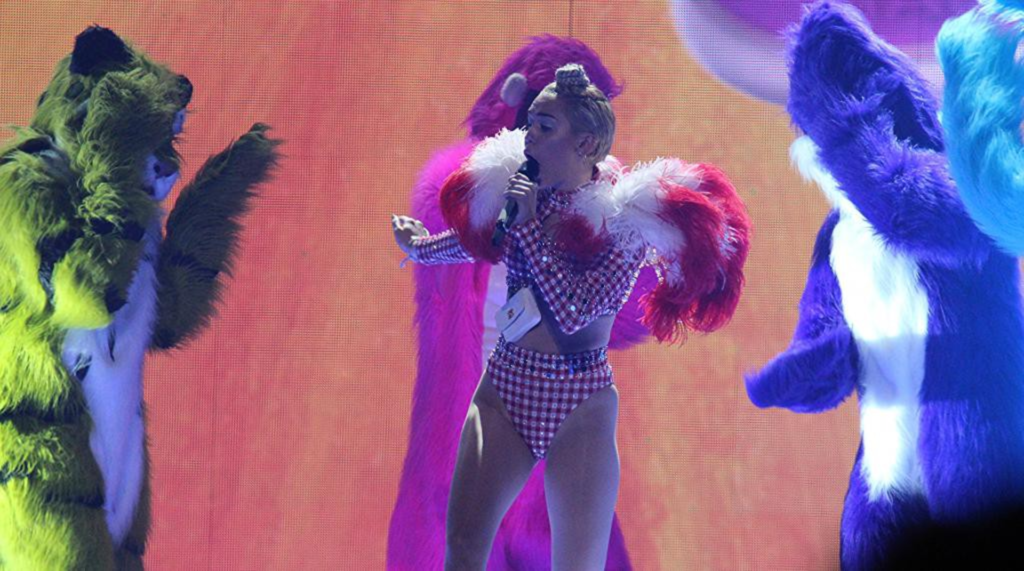 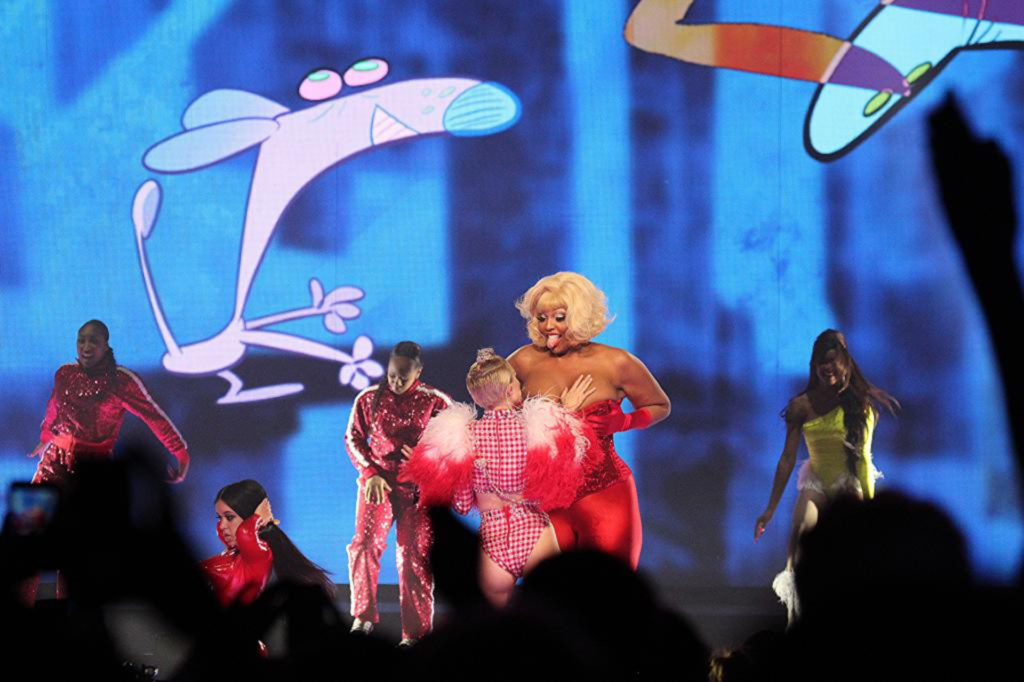 After the frenzy of the opening act, Cyrus thanked the doctors at KU Med, “Some really great fucking doctors there. Took really fucking great care of me.”

The amount of fucks uttered throughout the show is only worth mentioning because of their sheer volume; it was like she had just learned the word, and they made their way into every sentence. I’m not sure if parents care about swearing anymore, but it was this sort of thing, along with spitting water at the audience (which loved it), that seemed at times to scream at the audience: “I’m the boss of me! I do what I want!” In the end, it often felt like overcompensation for what may have been a pretty tight leash on Cyrus as a kid. 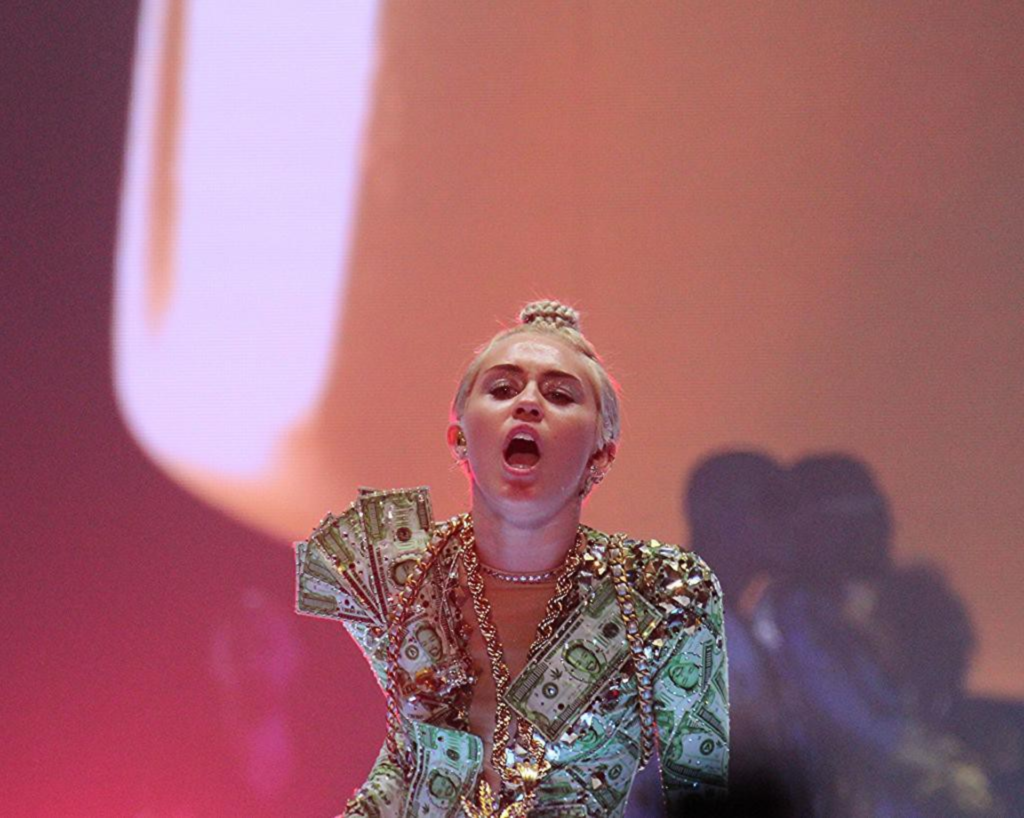 I should mention that Cyrus really is a very good singer, and does sing live, unlike what some might expect of a massive pop star. There appeared to be no doubling or singing over with recorded vocals. Her voice is truly powerful and well-developed. And she is every ounce a top-level performer: Even with all of the crazy colors and costumes and cartoonish business of the stage show, it is she that the audience is watching, and she can hold a stadium full of cellphone-addicted teens at rapt attention. That still doesn’t make the music better, but going to a pop show looking for truly soul-moving music is a bit like going to a fast-food restaurant and expecting gourmet. That’s not what these kinds of shows are about, and not why people like these things. It’s candy, not nutrition.

Cyrus as well is gracious to her devoted fans (when not spitting on them – which, again, they loved). Her fans make her gifts, which she accepts and wears while performing. Last night she accepted bracelets, hats, stuffed animals, and even handmade clothing and costumes, including a pretty cool sparkly french-fry costume and an embroidered denim jacket. She wore that french-fry costume for at least two songs. She thanked them for everything, and told them how much she loves what they make for her and give to her. “I have the fucking coolest fans ever,” she said. 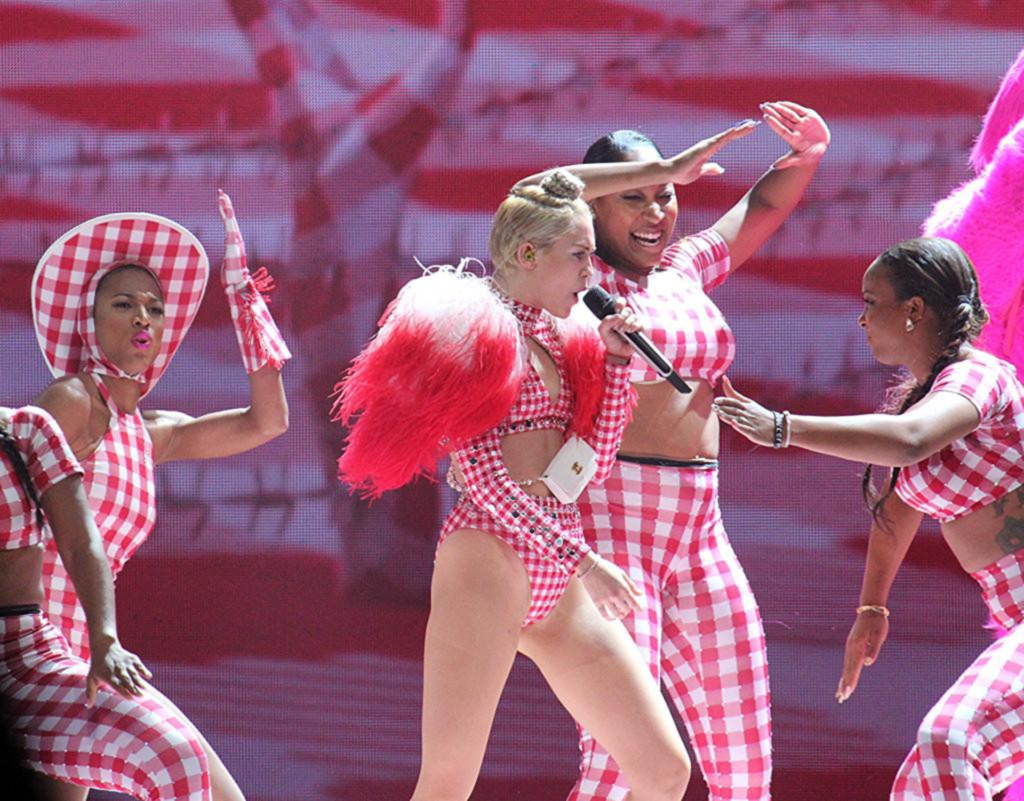 It should be no surprise that Cyrus basically does not perform much of anything she releases more than two years ago. While she’s released a handful of albums, the set list of the night was basically all new material plus a handful of covers, including cuts from the Beatles and the Smiths. Perhaps the best vocal performance of the night was a cover of Dolly Parton’s “Jolene,” which, apart from the added “slut” and “bitch” thrown in here and there, was akin to Dolly’s yodeling vocal style. (Side note: Dolly is Cyrus’ godmother. Lucky.)

As for the child-friendliness of this former child star’s show, it’s a bit hard to say, particularly as I’m not a parent. It was cringeworthy at points for this 30-something. At times, it felt too much like she was trying to convince us of her adulthood, and how different she is now from the Disney star she was.

There are a lot of sexually charged aspects of Cyrus’ performance, including a brief video montage that features Cyrus in light bondage, with just tape over her nipples. She rolls around on a big prop bed with male and female dancers (though that was more playful than sexual). She encouraged the girls to make out with their friends and to be a little freaky (because the boys like it). She closed the pre-encore set by riding around on a big Oscar Mayer wiener, telling the audience that “I miss riding around on this big ol’ wiener every night. But you know I been doin’ that anyway, Kansas City.”

So, make of that what you will. Some of it felt contrived. It was racy but not truly scandalous, with innuendo but no real action, something already taken much further by Madonna more than 20 years ago. So if you thought your parents were uptight about Madonna, that’s probably what young people think about this when they hear adults complain about it. 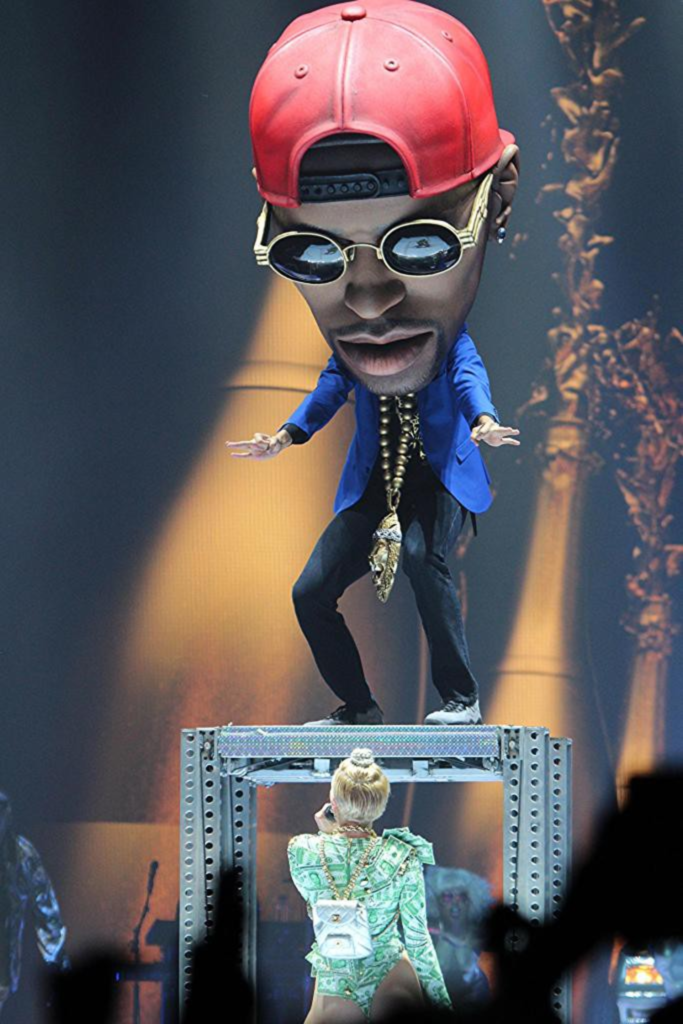 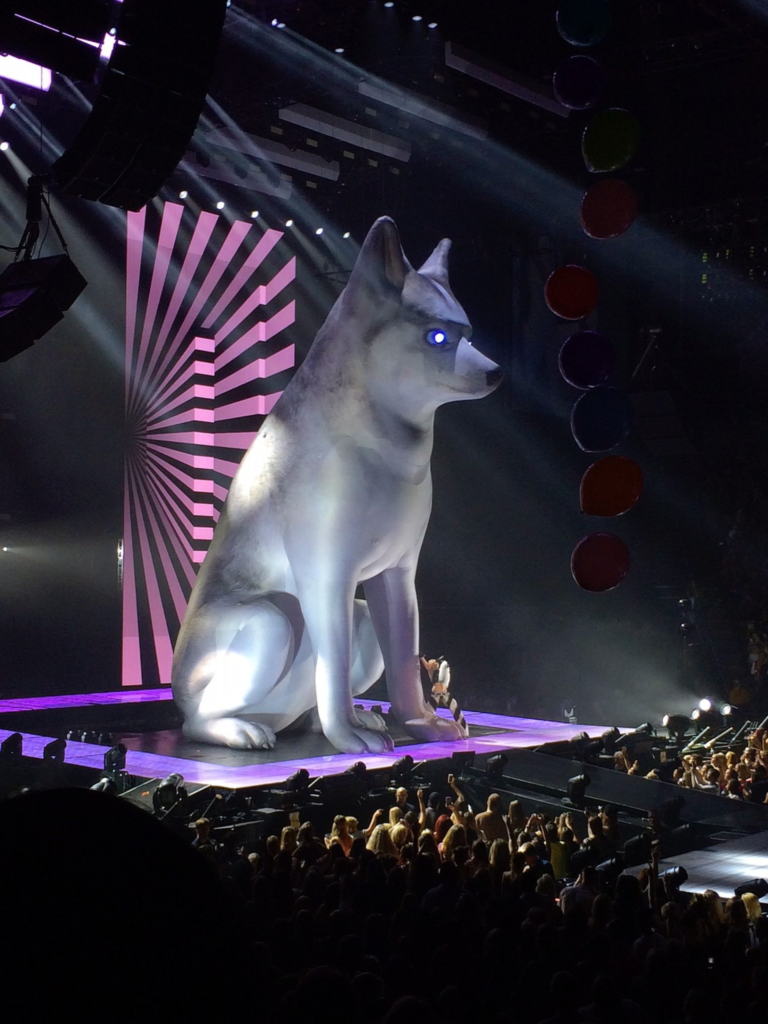 Cyrus plowed through more than two hours of relentlessly high-energy pop, closing the show with her biggest hits, “Wrecking Ball” and “Party in the U.S.A.” The show in its entirety was visually stunning, if not a bit thrown-at-the-wall. The costumes (courtesy of Marc Jacobs and hometown designer Jeremy Scott, among other big names) and the video production in particular were dazzling. While it is often very easy to roll one’s eyes at a 20-year-old testing her wings – after all, as that old saying goes, every generation thinks they invented sex – Cyrus’ talent is obvious and huge. She has plenty of room and time to mature and grow as a performer. If she keeps delivering at this level, the fans will be back. Maybe the tongue can stay at home.

Set list:
SMS (Bangerz)
4×4
Love Money Party
My Darlin’
Maybe You’re Right
FU
Do My Thang
#GETITRIGHT
Can’t Be Tamed
Adore You
Lucy in the Sky With Diamonds (The Beatles)
Drive
Fitzpleasure (Alt-J)
Rooting for My Baby
There Is a Light That Never Goes Out  (The Smiths)
Jolene (Dolly Parton)
On My Own
Someone Else
—
We Can’t Stop
Wrecking Ball
—
Party in the U.S.A.

For more photos, check out our slideshow here.