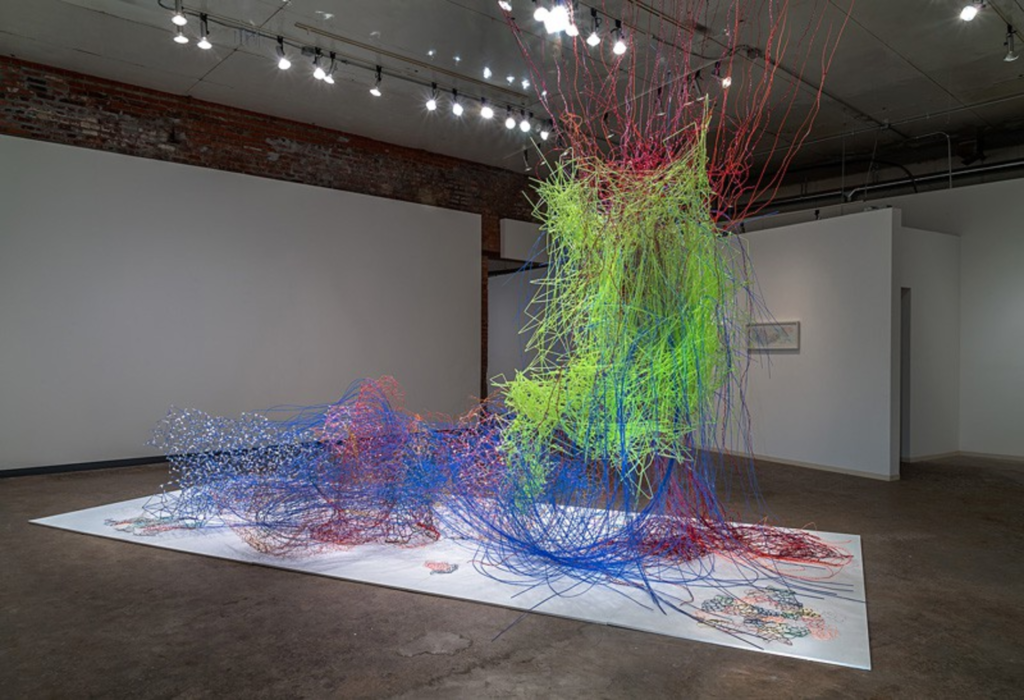 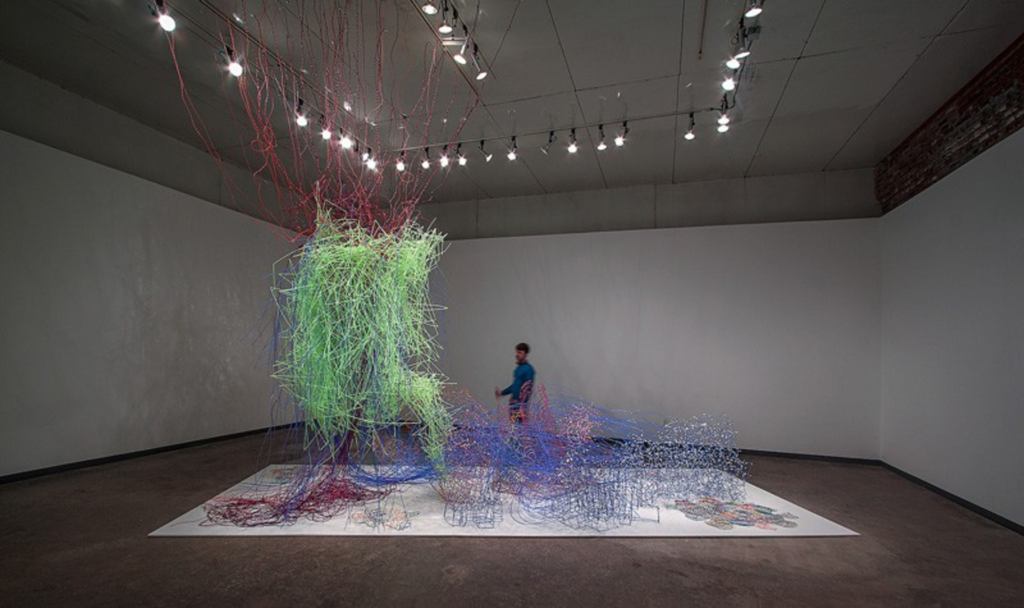 Miles Neidinger’s “The Anatomy of the Palace of Wisdom” — the central object of his City Ice Arts exhibition and the piece that gives the show its title — exerts a powerful force that a photo can’t capture. The riot of lines, crafted from everyday items, towers to the light fixtures of City Ice Arts’ high ceiling, free to be viewed from any angle against the purity of this room’s empty white walls and offset by a flat white base. Installed in situ over the course of two weeks, it comes down after Saturday, having been on view less than a month. That relative transience lends urgency to the whole exhibition.

Neidinger, 37, has a decade-plus history of building with ropes of joined straws (or coat hangers or wires or toilet paper or various other materials he describes as “crummy”), but his installation hits its mark in a new way. It feels very much alive inside its purposely limited (blue, red, green) palette, with subtle color exceptions that help animate it. And it contrasts an earlier work of his, “Everything We See Is Never Enough,” which hails excess with a fervor that makes the composition appear monstrous and ugly. (Neidinger installed versions of that work in 2010 at the Nerman Museum of Contemporary Art and the following year at New York City’s Flatiron Building.)

Neidinger’s current conglomeration is a more beautiful kind of monster. And though he may have begun this, too, as a critique of excess, it comes close to showing us “the palace of wisdom” glimpsed in the William Blake poem “The Marriage of Heaven and Hell,” which Neidinger references.

Tendrils of red twist-tie material, spiraled by the artist with a mechanical process involving a drill, hang down (or reach up) from a tangled, dense nest of long, neon-green drinking straws. This network is draped with lines of cobalt-blue plastic straws spilling into loop after loop, intertwining with more red wiring and extending horizontally along the floor in luscious, wavelike sweeps. It concludes in geometric lattices that operate as foundations.

One of the 20 or so people who gathered January 18 to hear the artist talk about his work smartly noted that the recurring metallic accents here give off a kind of sparkle. Neidinger agreed — he does, he said, look for contrast in what he called “sheens and surfaces” as much as through color. With that in mind, you can look again at the red twist ties that ripple, veinlike, from the top and see the shine in the materials and in the little squares of aluminum tape that help hold them in place.

These laid-bare dendrites refer to a childhood memory that Neidinger returns to time and again: his parents’ attempt to renovate an old house, and the unsettling insights generated by that reminiscence. “Anatomy” is, among other things, a pulled-apart stand-in for that gutted house, a representation of what happened when, he said, the “excessive attempt to remodel the home became too much.” But “Anatomy” doesn’t convey pain. Rather, Neidinger finds enlightenment with the realization that, as he put it during his talk, “there are limitations to a person — you can try to do too much.”

There are spatial limitations even in a place as spacious as City Ice Arts, though. Neidinger told his audience that he felt he’d run out of room here. He said that if the space were perhaps two or three times bigger, he would have incorporated in “Anatomy” dozens of cell-like leaflets, which instead are scattered in a big circle on the wall near the entryway.

These pieces of “Ideational” are mini drawings made of flat and three-dimensional glitter and bits of hair tinsel (the kind you can have woven into your own locks) pressed between two layers of clear packing tape. (Children have long saved autumn leaves between contact paper in a similar way.) But Neidinger’s sheer obsessive presentation of so many of these colorful chips elevates them to something jewel-like and desirable. He said they look a lot like the magnificent images captured by the Hubble Space Telescope, and they do. They present a separate anatomy — of the birth of galaxies, for example.

With the commanding presence of “Anatomy” anchoring your attention, the remaining elements of Anatomy the exhibition (seven horizontal drawings and paintings) might seem negligible, like afterthoughts. But Neidinger’s four maplike “Schematics” — together with three conglomerates of little color blocks, variously filled with patterns and each called “Tessellation” — hold your gaze as a middle ground between the looming tangle and the tiny nebulae.

The blocky plan-scapes of “Schematics” resemble the photographs you see online of crammed-together apartments in Asia, like an aerial view of some non-place devised by a planning agency that wasn’t really paying attention. Nothing matches, yet the parts come together anyway. A few words visible here and there (“fuck” is one) might represent a reaction to excess — or could be the artist’s code for something else.

Neidinger told the gallery audience that his work is largely about reversal — that he criticizes excess by being excessive with materials, for example. He said, “It starts as being about me holding a mirror up to the public, but it ends up revealing more about my own proclivity.” That duality is something Blake might have appreciated.