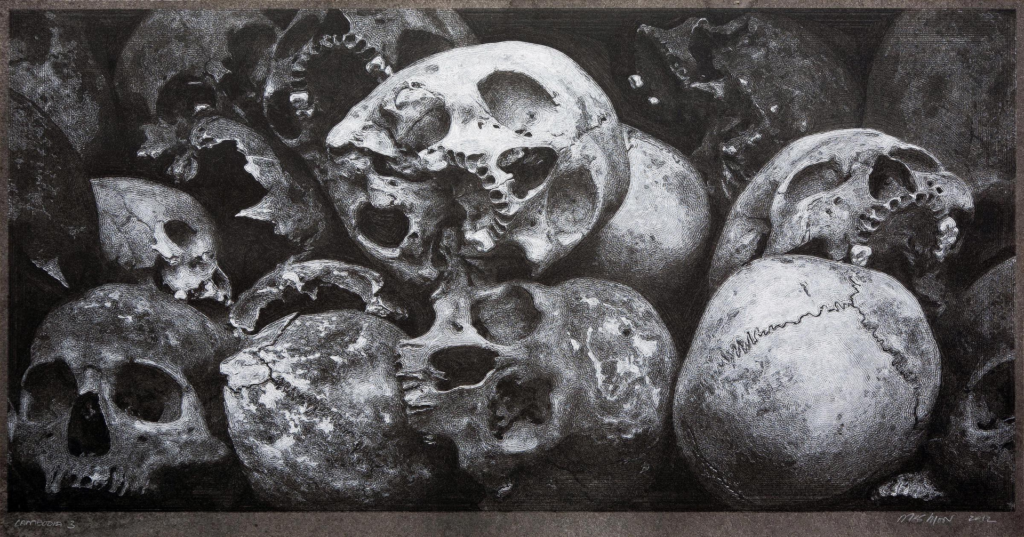 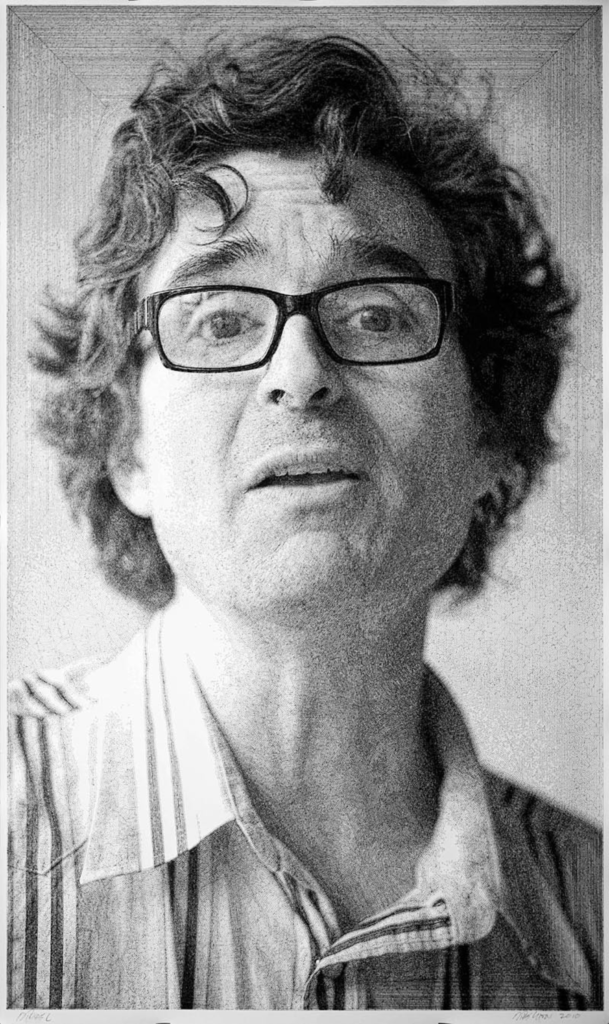 Inside an unremarkable three-story building near the intersection of Southwest Boulevard and Broadway, a couple of ShopBots are doing what they’re supposed to: following the programmed instructions of a human. But the industry under way here isn’t the usual manufacturing, and the human has two art degrees.

One of the robots cuts at plywood that will be inked onto prints. The other moves along X-Y coordinates to trace topographic-looking patterns with black or white ink onto hand-tinted watercolor paper.

The paper, the bots and the programming belong to Kansas City artist Mike Lyon, who produces striking, larger-than-life portraits of people and nature using machines he has trained. A collection of prints drawn by machine — following millions of lines of code — are on display in a solo show at Sherry Leedy Contemporary Art through April.

For Post-Digital Prints and Drawings, Lyon has put up 10 7-foot portraits: the faces of friends and intriguing strangers and well-known local artists. Lyon takes his own photographs, then selects shots that he says offer moments of insight. The results look like frozen moments from different conversations. Michael Rees appears on the verge of agreeing with you. Archie Scott Gobber could be acting out a tongue-in-cheek reference to his double-entendre word paintings. Miguel Rivera is perhaps getting ready to explain some printmaking concept to his Kansas City Art Institute students.

Lyon’s machines may seem labor-saving, but he still spends from eight to 11 hours a day (including weekends) on his art: programming, printing, experimenting and refining the techniques that let him build ideas into pictures. He also has practiced and taught Shotokan karate for decades, and the ground floor of his studio is a gorgeously appointed dojo that’s home to the Kansas City Shotokan Karate Club.

The constantly busy Lyon is an enthusiastic host when you visit his studio, ready to show works past, present and in progress. (As this story went to press, Lyon e-mailed me about one of the latter, “Addy and Arthur,” to say he’d finished it: “I think it’s my best ever — that doesn’t happen often.”) He may also show you some of his ukiyo-e prints from 17th-century Japan.

After about 15 years of working as an engineer in the commercial sector, Lyon was able to devote himself full time to making art. In the late 1990s, he went to Japan and studied woodblock printmaking under Hiroki Morinoue. (He also cites Leon Harmon, Ken Knowlton and Claude Mellan as influences.) He has been exhibiting his own art since 2001, with his first solo show in 2004. His work is the subject of a chapter in the 2012 book Post-Digital Printmaking: CNC, Traditional and Hybrid Techniques, by Paul Catanese and Angela Geary, and out of a connection with artist Eric Fischl has grown Lyon’s inclusion in the Kansas City Collection.

There have also been, he says, some significant sales. But despite what Lyon acknowledges is a certain “rock star” urge, he admits that he isn’t especially interested in self-promotion. (He does have an unusually comprehensive website.) “There’s making stuff, and then there’s selling stuff,” he says. “Maybe there’s also exhibiting stuff, but they’re different, and the skills involved and the motivations are different. I really like making stuff. I’m driven to make stuff. I’m not nearly as driven to sell stuff.”

His technical training allows him to solve the problems of creating large-scale images through programming, but Lyon is as interested in science as he is in process. He’s intrigued by why certain things — the human form or face, a particular arrangement of pattern — look beautiful or evoke a positive emotional response, while others, even if made up of the same elements, do not.

“Some of the content I’m free to explore is how to make image, the ‘location of meaning thing,’ ” he says. “These heads, 6-foot high, are recognizable, so where [and] how does that happen, that I can squiggle lines on a paper and it looks like something? How to make a pen, how to make an image, how to make areas of light and dark?”

Crosshatching. When you step close to these prints, you get lost in their etchinglike squiggles. Step back from the big pieces, and your eyes tell your brain to see shading, forms, a face.

In two smaller works, the fact that there is less surface area available to convey detail means that the eye-brain transmission is automatically filling in lines that are not there. In a long rectangular print of 16 little jumping Peregrine Honigs (dressed in the artist’s signature bunny ears), outlines of the figures are missing in some places, though you perceive a completed form. (Caleb Taylor’s work, some of which is in a solo show in the rest of the gallery, also plays with this idea of layers and looking behind them.)

In real life, Lyon points out, we can tell there’s a tiger hiding in the bushes without seeing the whole animal. For now, that evolutionary trick of human perception still separates us from the machines.