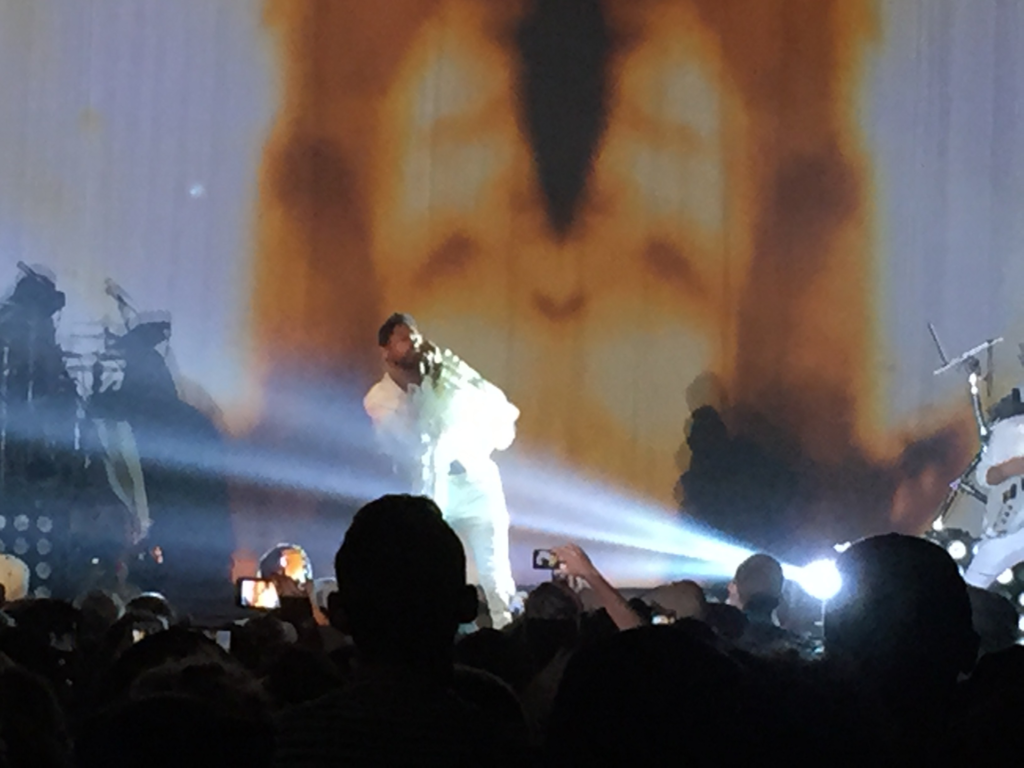 Miguel had a couple of things on his mind at the Midland last night.

The latter is what he says is the message of Wildheart, his excellent new album. And “Wildhearts” is also how he referred to the members of his audience as he filled us in on his manifesto.

Introducing “What’s Normal Anyway” midway through the show, Miguel proffered, “Normality is subjective. Everybody has their own idea of what normal is supposed to be. I stopped trying to make people happy because it’s a waste of time.” At the end of the song, he led us all in an oath to believe in ourselves.

Meanwhile, the women next to me were taking selfies of their asses. Later on, they were brought backstage passes, because for some Wildhearts, the reward of being true to yourself can arrive near instantaneously.

Of course, Miguel’s got a few things that make it easier on the “being true to yourself” front than the rest of us. Like killer abs. And the ability to pull off as much white fringe as he can layer on.

Seriously, showing off his mad ups, twirls and other moves as the apocalypse played out on the screen behind him during one of the opening numbers, “The Thrill,” Miguel spread his arms as if about to take flight upon fringy wings of sex-fueled majesty. Even his mic stand was covered in the stuff. 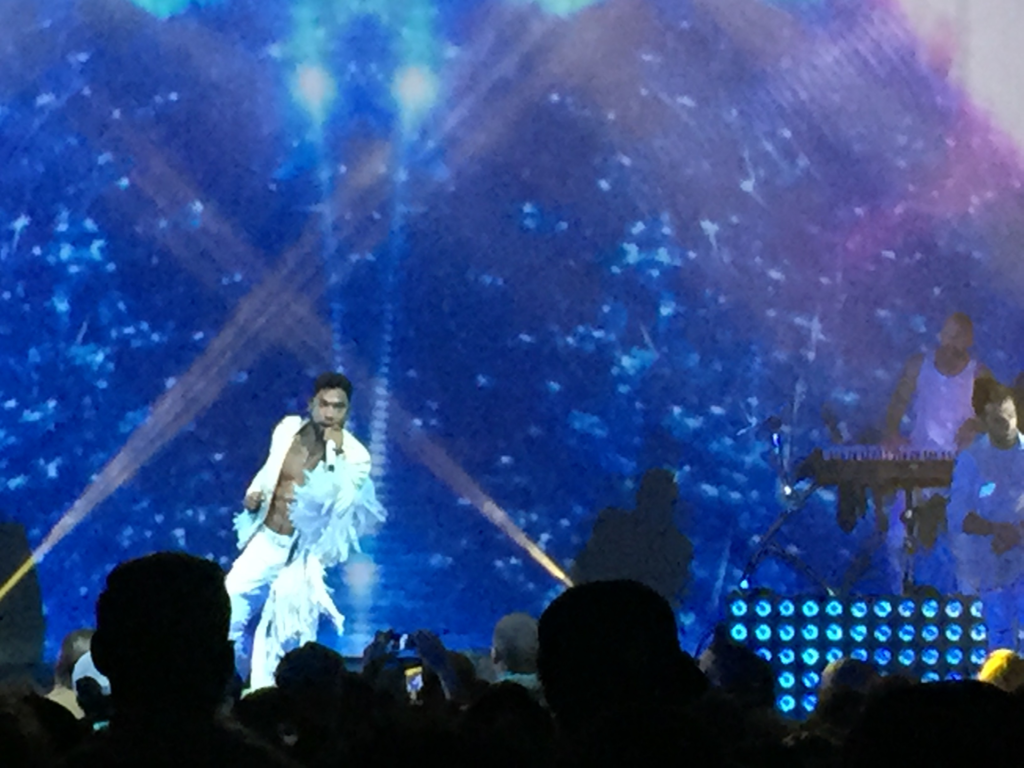 Miguel had no problem connecting with the crowd, singling ladies out during “Gfg.” (It stands for good fucking girl.) “Yeah, I see you with your phone up, babe,” he said. “Yeah, I see you with your peace sign.” One lucky fan even got to go home with the sleeveless Wildheart tour T-shirt Miguel had switched into, one of the rare occurrences when he was wearing a shirt. Again, for tops, Miguel mostly favors fringy jackets or nothing.

Slinging a guitar on for “Pussy Is Mine,” Miguel showed that his vibe most of the evening would be as much rock as it was R&B. Among the images projected behind him were abstractions of what appeared to be cosmic vaginas and lava derrieres. And even if that’s not what they were, in the environment Miguel whipped up we can be forgiven for making that leap.

Miguel’s band was tight throughout the show, but while Wildheart can be a grimy record, sometimes the Midland sounded awfully muddled. The major complaint, though, would be that Miguel had a ton of backing tracks in effect. Yet what could be done? Miguel is but one man.

Saving three of his biggest for the encore, Miguel came back with Wildheart’s first single, “Coffee” — and another jacket with at least three times more fringe than before.

That led into “How Many Drinks?” The hit from his breakthrough album, 2012’s Kaleidoscope Dream, is a flirty jam on record, and live, Miguel turned it into a howling threat with wailing guitar atmospherics. This was also where Miguel descended into the audience to crowd surf, still asking while being passed around on his back: How many drinks would it take you to leave with me?

Finally, Miguel serenaded us with an extended take on “Adorn,” and introduced us to his drummer, Kansas City’s own RJ Kelly. 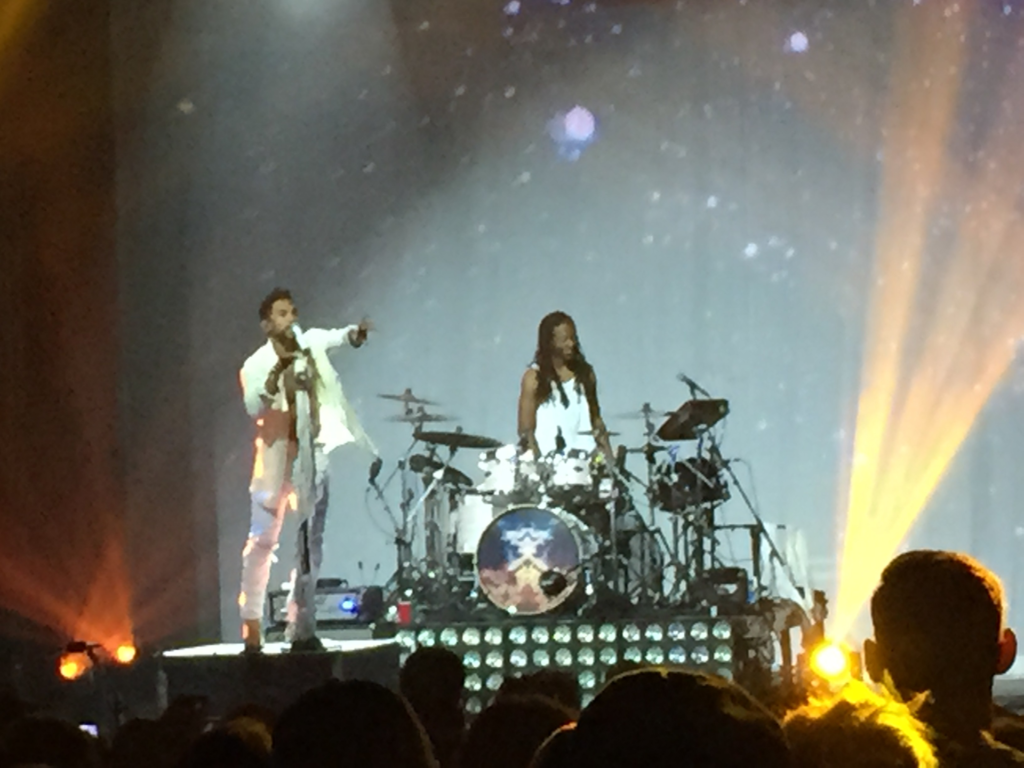 But before Miguel took off, he left us with a few choice words. “Wildhearts, don’t you forget you are the only you that has ever been and that will ever be. Can you wrap your mind around that? If you wanna rep, we got merch in the back. But make sure you rep right here,” he said, pointing heartward.

And even for the audience members that didn’t leave with a T-shirt, after that set, we were all buying.

Miguel’s setlist (almost certainly riddled with error; leave your corrections in the comments):
A Beautiful Exit
The Thrill
Simplethings
Sure Thing
Hollywood Dreams
Gfg
Girls Like You
The Valley
Pussy Is Mine
Leaves
What’s Normal Anyway
Deal
Waves
Quickie
Face the Sun
—
Coffee
How Many Drinks?
Adorn