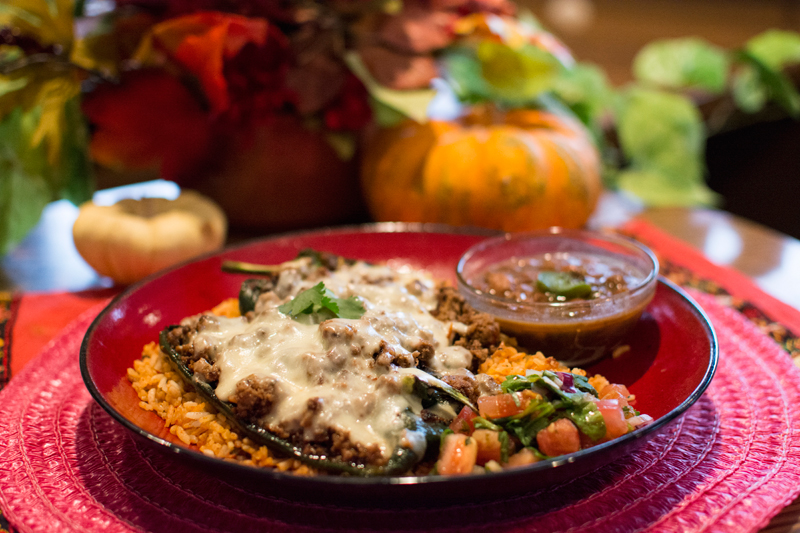 Tamales are to Southwestern stomachs what barbecue is to the bellies of Midwesterners: comfort food that takes hours to create and much practice to perfect. It is immediately apparent whether a cook has any business messing with this labor-of-love dish: In the wrong hands, they can come out dry or gluey, their shredded meat or veggie fillings underseasoned or desiccated.

Kristy and Justin Buster, of Mighty Tamales in Lawrence, know precisely what they are doing. Their two-month-old endeavor, inside the Veterans of Foreign Wars hall at 1801 Massachusetts, dishes up a simple but exceptionally good menu of from-scratch tamales, stuffed poblano peppers, quesadillas and three styles of taco: puffy, street, or served on fry bread (Mapuche tacos, a play on Indian tacos).

“Most of my foods are passed down from family and friends,” explains Kristy, who develops the recipes and runs the kitchen while her husband makes fresh salsas and manages the front of the house. In addition to Mighty Tamales’ posted menu, she often accommodates off-menu requests for customer favorites, including (so far) chimichangas, flautas, borracho beans, mango-pineapple pulled pork tacos, smoky jalapeño street tacos and warrior stew (a hearty Native American recipe).

The Busters moved to Lawrence from Texas in 2009 so that Justin could attend Haskell University. They hatched Mighty Tamales two years ago, delivering batches of homemade tamales throughout Lawrence. Beginning this past summer, the Busters set out to find a permanent space for Kristy to serve her food, launching word-of-mouth and GoFundMe campaigns in support of Mighty Tamales. The couple eventually coordinated with the VFW on a partnership that includes use of the building’s large kitchen and dining spaces. The VFW sells soft drinks, cocktails, beer and wine at its bar to Mighty Tamales’ diners, in addition to its regular patrons.

Customers can order off the menu for dine-in or carryout, or call 24 hours ahead to order batches of tamales by the dozen. The choices: shredded pork, shredded beef, or mixed peppers. Each batch comes with a trio of house-made salsas. (I recommend picking up an extra dozen to freeze. They’re among the best in the area, and when a craving hits, you don’t want to find yourself without any on hand.)

“Besides a healthy, happy family,” explains Kristy, “the only other thing I’ve ever wanted was my own restaurant.” Well, she and her husband have done it. Mighty Tamales is open 11 a.m. to 8 p.m. Saturday through Thursday.

The Joe West–helmed, Bread & Butter–owned Stock Hill opens its doors for the first time Thursday, December 1, serving a selection tempting, pricy dishes, including wagyu, wet- and dry-aged steaks, pastas, salads and entrées such as pork-shank osso bucco with mascarpone polenta and coffee-crusted Akaushi short ribs. West has been working on the concept and menu alongside Bread & Butter since February.

“Preparations have been an up and down process so far, as expected,” says West, who is working for the first time as executive chef of a full kitchen. “It’s like playing Tetris, except our reputations are on the line and there are no do-overs for guests’ experiences. I’m anxious and excited. I’ve been thinking about this day for a very long time. I’ll be bringing the no-huddle offense to the kitchen, and everyone understands they will need to keep up.”

If you spent the past few months constantly refreshing that browser tab locked on Blue Koi’s Facebook page, hoping to find progress reports about when the midtown location of the Asian restaurant would reopen after a fire this past summer, you know two things now: (1) Updating social media isn’t really Blue Koi’s thing. (2) A short post last week said the place would crank to life again on November 21. When I called the restaurant a few weeks ago, I was told it would be up and running by Thanksgiving, and so it was. Welcome back, Blue Koi.

On to the week’s restaurant events:

The Farmhouse (300 Delaware) is making its Pig & Whiskey events a weekly affair. Get down with a variety of pork-based specialty appetizers while enjoying 50 percent off your whiskey, rye and bourbon drinks. Reservations aren’t required but can’t hurt; see the Farmhouse’s website.

Take your palate to the Napa Valley tonight for a dinner featuring products from Cain Vineyards. The event, hosted by Sullivan’s Steakhouse (4501 West 119th Street in Leawood), is a five-course pairing centered on a hearty menu: pickled oysters with strawberry pearls, lamb chops with wild-mushroom couscous, roasted duck breast with gouda grits, and beef Wellington with wild-mushroom foie gras duxelles and aged cheddar potatoes. Dessert is white-chocolate cheesecake. The dinner is $125 per person exclusive of tax and gratuity. Call 913-345-0800 for reservations.

Lifted Spirits Distillery (1734 Cherry) puts on its grand opening tonight with vodka and gin cocktails, hors d’oeuvres and giveaways from 5 p.m. to midnight.

Repeal Day marks the end of Prohibition in the United States, and in Kansas City the obvious place to celebrate the occasion is probably the Rieger (1924 Main). So tonight there’s a four-course dinner featuring cocktail pairings created by guest bartenders Andy Rieger and Ryan Maybee, partners in the Rieger, Manifesto and the Rieger Distilling company. The dinner is $85, not including tax or tip. Make reservations by calling 816-471-2177.

Sullivan’s Steakhouse (4501 West 119th Street, Leawood) is also marking Repeal Day with $20 flights of Old Forester, the legendary distillery that ran before, during and after Prohibition.