Midwestern vikings, orcs, elves, and pirates do battle in Dagorhir 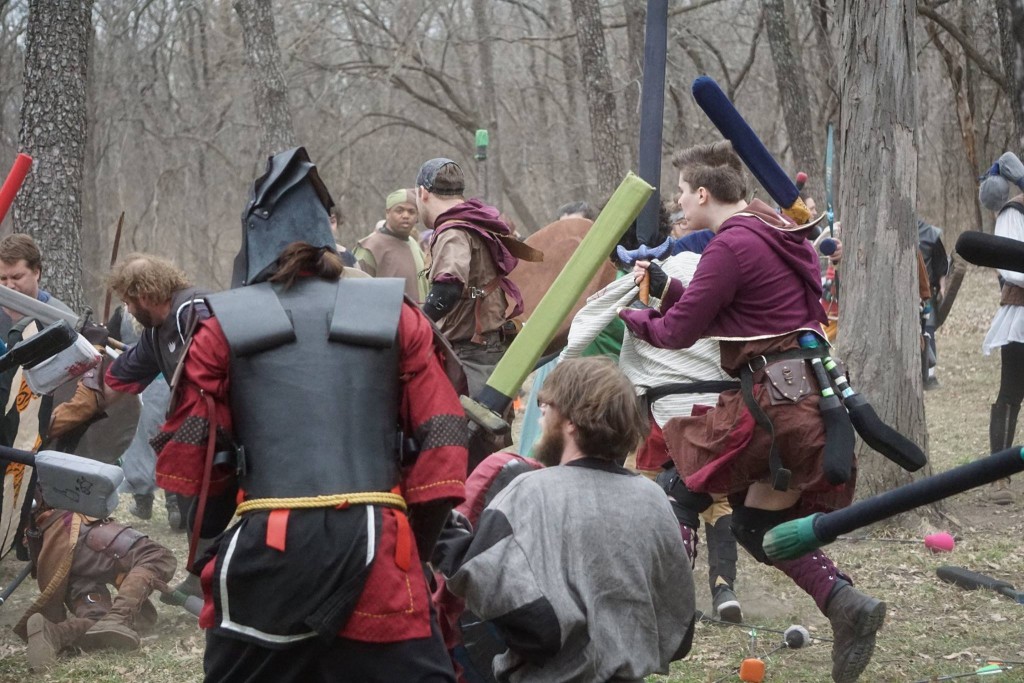 A group of Kansas City fighters rush forward to take out the ‘Black Knight’ in a forest battle between two realms. // Photo by Fayne Erving.

[This article originally appeared in the July 1st print issue of The Pitch and features photos of participants engaging in sport, with said photos taken before pandemic and mask/distancing measures were suggested or enforced. Like all other sports that cannot meet current city guidelines, it is obviously on hold at current time.]

“Lay on!” A grizzled looking fellow in his early forties with stubble on his face, wearing a full chainmail suit and a tabard shouts out, as two diverse groups of 25 people charge toward one another, wearing garb picked from history books and fantasy novels. Each of them wields a foam weapon of some sort. The game they are playing is Dagorhir. An imitation of medieval combat, colloquially referred to as whacky bats or boffer battles by its myriad of fans and admirers.

It’s not quite a LARP (live action role play), as although the players take on personas and use character names, the focus of the game is largely athletic. That being said, the vast majority of players are very self aware, enjoying an athletic opportunity to goof off and express themselves. It is to medieval warfare what paintball is to modern combat. And most importantly, it is a whole hell of a lot of fun.

Dagorhir was founded in Washington, DC in 1977 by Bryan Weise. Weise was a huge fan of Lord of the Rings and named the game using Tolkien’s Elvish—with Dagorhir meaning “Battle Game.” Weise envisioned a theatrical game, but the game quickly took on a wargame feel, with enthusiasts being drawn to it because of the low cost of entry and the appreciation of the ridiculous. Now, 43 years later, the game continues to grow, routinely attracting over 50 people to parks for weekly practices, and hundreds more to big events, including Ragnarok, a week long, mega event held yearly in Pennsylvania. Kansas City’s group, Dominion of the Unconquered Sun, was founded in 1997 and meets nearly every Sunday at Meadowmere Park in Grandview, MO at 2 p.m. 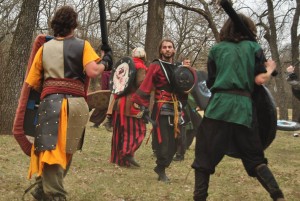 Charlie “Akuma” Red and Sean “Luxon” Yoder are surrounded by adversaries from both sides and prepare to make a last stand. // Photo by Fayne Erving

At the core of the sport is the system of foam combat. Combatants wield foam padded weapons and attempt to disable and defeat other players by hitting them in their limbs or chest (headshots, save for archery, are expressly forbidden). Once a player has been hit in a limb, that limb is disabled. If you get hit in two limbs or on the chest or back, you are “dead” and have to walk back to the “spawn point” before rejoining the game. There are a variety of different weapon types available, ranging from your typical sword and shield loadout, to spears, bows and comically oversized “red” weapons that can “break” shields. The unique diversity of weapons means that people of a variety of different sizes and athletic ability can be formidable fighters.

“I was not at all athletic prior to Dagorhir, and I’m still not,” says Sarah “Viv” Johnston, who spends her days programming computers and her weekends shooting suckers in the head. “But, now I look forward to spending three to four hours in the sun in the park every weekend working out.”

Game types include capture the flag, team deathmatch, and MVP battles, with variants and obstacles sometimes added to the mix—with the goal of the game being simple enough for new players.

“You don’t want to break the rules of physics more than once,” says Tanner “Tulkas” Johnson, an organizer of KC Dagorhir. “If the game rules are simple and interesting, people will have a better time playing and focusing on beating each other up, rather than trying to follow complicated rules.”

“Walking through the camp at night is like walking through a feasting medieval camp, occupied entirely by your friends. No one is a stranger at a Dagorhir event: everyone is a friend and fellow participant,” says realm treasurer Amanda “Lady Nessa” Luchento

The Dagorhir prides itself on accepting everyone with open arms. 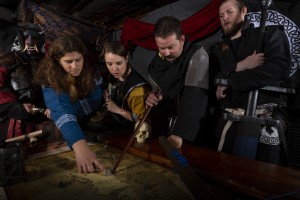 Photo courtesy of Dominion of the Unconquered Sun.

“My favorite thing about Dag is you can be whoever you want,” says Erin “Willow” Bishop, a transgender woman and dangerous shield maiden. “The Dag community, especially in Kansas City has been incredibly welcoming. Whereas HEMA [Historical European Martial Arts] and SCA [Society for Creative Anachronism] require a pretty hefty monetary investment to get on the field. You can walk onto a Dag field and after a 10 minute tutorial, be fighting the same day.”

For those who prefer not to craft their own accessories, Charlie “Akuma” Red sells garb and weapons at his Shawnee computer store Hyper Computer and Battle Games.

“I love seeing the different characters that people come up with, there is so much flexibility in Dagorhir, you can take on a historic persona, a high fantasy persona, or even one based on a ridiculous anime,” says Red, who loves hearing the stories of both new and veteran players. “It’s a great workout for people and a great way for people to connect. There is honestly nothing like it.”