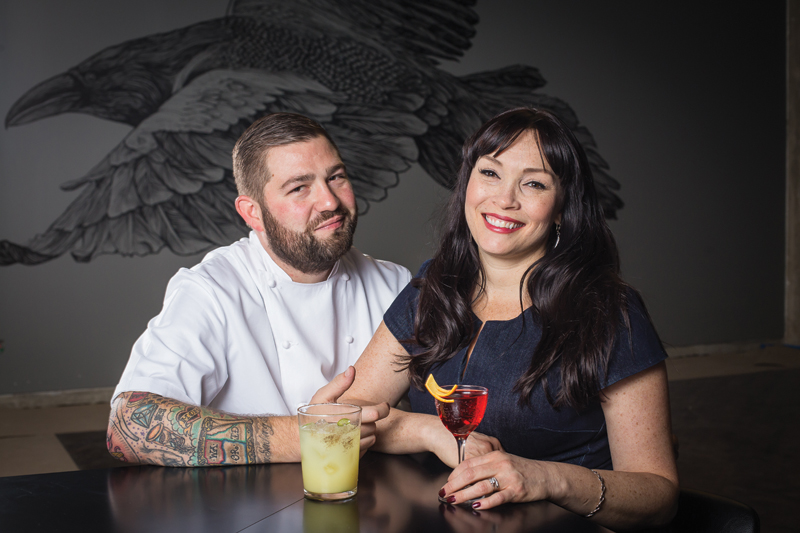 A few weeks ahead of the opening of Corvino Supper Club and Tasting Room, the most eagerly awaited new restaurant to open in Kansas City in 2017, chef Michael Corvino jokes that it all could have been very different.

“Over the past couple of years, there’s a little piece of me that has wondered: Should I just go do something fast-casual where everything’s in a tortilla?”

Corvino is kidding — mostly. The Washington state native has racked up an impressive résumé centered mostly on luxury dining: executive chef at the American in Kansas City and at Rosewood Mansion on Turtle Creek in Dallas; time at the Ritz-Carlton in Naples, Florida; stint at the pan-Asian Departure in Portland, Oregon, and the Peninsula Hotel in Chicago. Maybe the man really does want to roll burritos for a few hours a day and get to bed early.

Not anytime soon, though.

For the past two years, Corvino and his wife and business partner, Christina Corvino, have been designing the Corvino Supper Club and Tasting Room, a union of luxury and casual anchoring the new Corrigan Station development at 18th Street and Walnut in the Crossroads. On its north end, the restaurant features a private, 18-seat tasting room; its main dining room is home to a 90-seat “supper club,” which will focus on shareable and family-style plates, against a backdrop of live music. It’s an altogether ambitious setup, especially for first-time restaurant owners. Ambitious but — crucially — less formal than the departed (and famously starchy) American.

“I’m so excited,” the chef tells me when I ask him about his venture’s less buttoned-down climate. “I’ve done a lot of fine dining. We are doing the tasting room because I want to have this extremely focused aspect that emphasizes quality and touches people. But I also just want to have fun, and have a place where my friends and peers can just come in and sink their teeth into something.”

Building a large local restaurant from scratch, in the heart of the one of the city’s most desirable locations, is no small endeavor. Early in their planning process, the Corvinos enlisted Hufft Projects, which was involved in designing and building Corvino Supper Club and Tasting Room. The couple naturally stayed involved at every stage of the project — meaning that Michael Corvino, unnaturally, has gone long stretches without cooking.

“He needs to get back into the kitchen,” Christina Corvino says, laughing. Her husband agrees, noting that this is the longest break from duty he’s taken since he began his culinary life at age 17. But the layoff was a function of ownership, something new for the now-35-year-old. Speaking with him, you don’t get a sense that he (or Christina) feels bowed by the pressures of new responsibilities and ramped-up expectations.

“At a serious level of cooking, most chefs take ownership of a restaurant as if it were theirs,” Michael Corvino says. “There [at the American], my name was on the menu. But when you’re an owner, and when the financial piece is 100 percent yours and people have invested in you, there is a big difference. I just care that much more.”

Christina Corvino agrees. “The parts that are new are the legal aspects,” she says. “We have investors. There is a lot of learning with that. It’s all on-the-job learning, and you just hope that you’re not making a mistake.”

Her role will primarily be front-of-house; she will manage guest relations as well as plan and coordinate events. She’s also arranging the flowers in the restaurant every day, bringing color into a place designed with a muted, black- and gray-leaning palate in order to cede the spotlight to the food.

That leaves the back of the house to Michael Corvino, who for the first time is working in a kitchen he designed himself.

“I wanted to go big the first time and get it right” he says of the space, which includes plenty of windows to let in natural light, and no fluorescent illumination. The kitchen will be visible from the tasting room, and diners in the supper club will be able to glimpse the action, too, through windows placed behind the supper club’s long bar.

Michael Corvino calls his kitchen a “European-style pass” — meaning that the cooks and chefs plate together at a big table, with nary a heat lamp in sight. The servers and the chefs will set the pace for diners, chef Corvino says, but the style in the kitchen will be order-fire: Once a dish is plated, it goes right out.

As for staff to go in that kitchen and dining room, the Corvinos were able to build a team of talent by calling upon the chef’s former colleagues and staff. He recruited chef de cuisine Dina Butterfield from Dallas, where she worked with Michael at Rosewood Mansion (and opened Japanese restaurant Uchi there). And familiar faces are coming over from the American, including sous chef Andy McCormick, general manager Keith Goldman, sommelier Ross Jackson and pastry chef Amanda Schroeder, former assistant to Nick Wesemann. The Corvinos have hired bar staff but say they’re looking for a “perfect fit” to manage the bar.

The menus will reflect chef Corvino’s diverse experience: Expect significant Asian influences, classic European cooking techniques, interpretations of American staples, and specialty ingredients from all over the world. His vendor orders so far include heritage pork from Paradise Locker, wagyu beef from Texas, fish from both coasts as well as from Europe, fresh wasabi stem from British Columbia and mushrooms from the Pacific Northwest. There will be a dry-aged ribeye with huitlacoche. There will be fried chicken with gochujang cream and white kimchi (gochujang being a red chile–based Korean condiment).

A shrimp-and-mussels plate, Corvino says, encompasses his overall approach to menu creation. “This dish is playing off of a French-style mussels dish with broth and bread, and we’re also playing off of Thai and Asian curries that you serve with crunchy, sour pickles to cut through all of the spices of the curry. We cook the mussels in a broth, then cool them down to room temperature and pull out all of the shells and strain our broth. Then we cook rock shrimp and add the broth with green-curry butter, and then add the mussels back in. So then you’re just able to eat shrimp and mussels in this delicious, luscious curry broth, and dip your bread in it without all the shells getting in the way.” 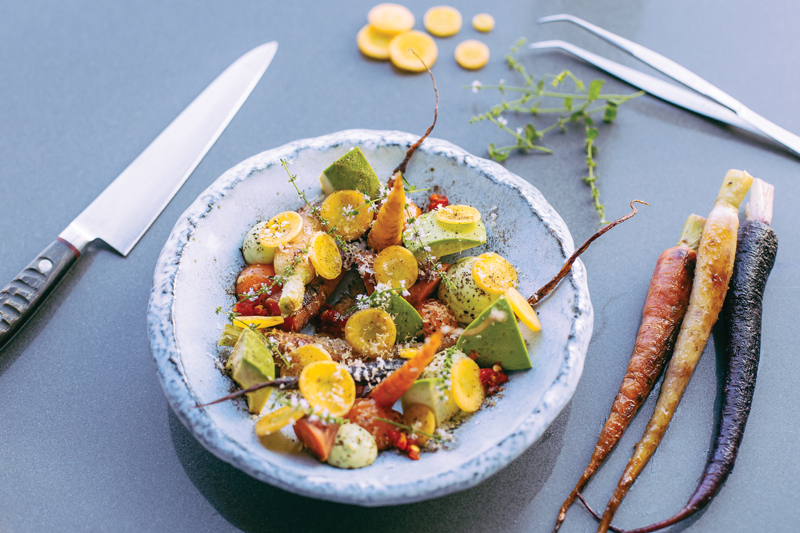 The chef’s excitement mounts as he goes on: “It’s very much what we do in French cooking, right? Cook with a bunch of vegetables, get all the flavor, strain it all into this liquid, and then pour it over perfectly cooked vegetables. It’s really mishmashing ingredients and techniques from French and different East Asian cultures. That’s very much to me what American food is, and what I as an American chef — classically trained by European, French and Swiss-German chefs, and having opened a Japanese and Korean restaurant and worked in a Chinese restaurant — [see as] what a melting pot is. It’s really full-circle to me what American cooking is.”

What was that about everything maybe being in a tortilla?

The supper club is now open, with the tasting room set to follow by May 1. The idea is to ease into the new environment.