Micah Kubic, executive director of the ACLU’s Kansas chapter, is the anti-Kobach 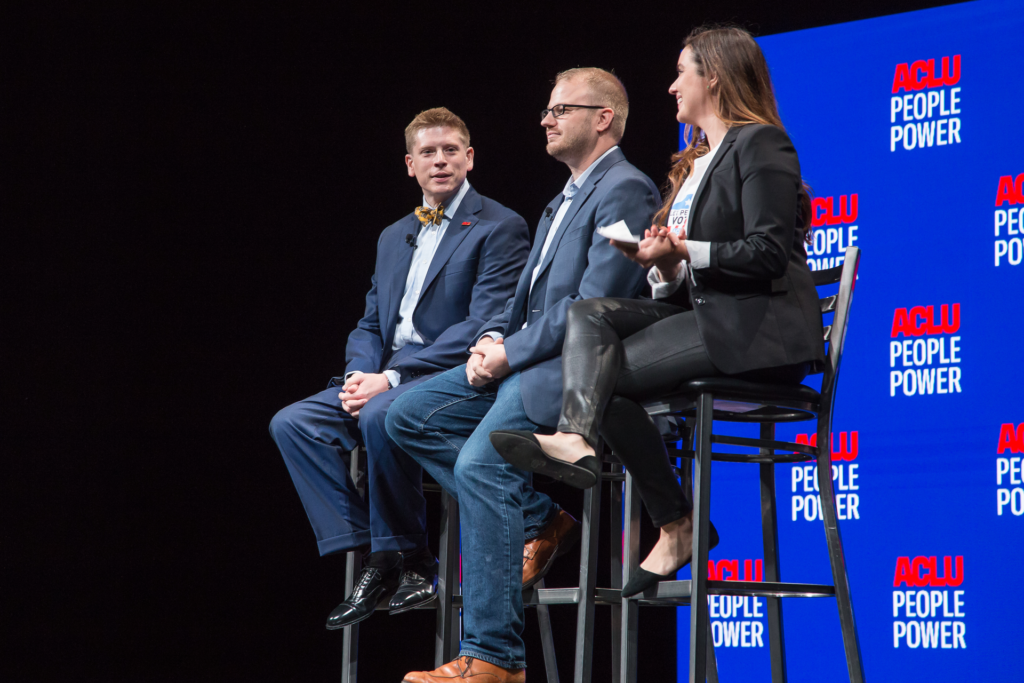 Every story improves with a villain. And for a pumped-up crowd in the Lied Center at the University of Kansas on a balmy October evening, a certain swaggering fabricator is most hiss-worthy — a down-ballot Kansas politician turned national menace.

The American Civil Liberties Union has brought some of its home-office leaders to Lawrence to launch its “Let People Vote” initiative, carefully laying out a case that Republicans are systematically obliterating voting rights in America, and a grass-roots movement is needed to stop them. Now, Faiz Shakur, the ACLU’s national political director, taps a local guy to talk about Kansas’ own Darth Vader.

Perched atop one of those awkward tall-legged chairs that exist only to make public speakers uncomfortable, Micah Kubic, executive director of the ACLU of Kansas, seizes the moment as though he’s just caught the football with nothing but open field ahead.

“Kris Kobach has been the secretary of state here in Kansas since 2011, and during his tenure he has earned the nickname ‘the king of voter suppression,’” he says. “Mind you, there are quite a few contenders for that particular crown in the country today, but he is the undisputed champion.”

Kubic proceeds to deliver a blistering indictment of the man who co-chairs Donald Trump’s fraudulently named Election Integrity Commission — and wants to be the next governor of Kansas.

“Who is Kris Kobach?” Kubic asks, repeatedly and with relish.

And now, Kubic announces, warming up to his closer, Kobach has a platform to inflict upon the nation the ideas he’s used to suppress voter registration and turnout in Kansas. “Ideas that are usually illegal, frequently unconstitutional, and always, always wrong.”

Kobach watchers know he likes to promote himself as “the ACLU’s worst nightmare.” That plays well with Kobach’s base — an anti-immigrant crowd prone to picturing the ACLU as a commie-enabling klatch of radicals. But the audience in the Lied Center — a mostly 50-plus, decidedly unradical-looking group of Midwesterners — understands that Kobach has the equation backward. So do the hundreds of people around the nation who are watching a live-streamed version of the Let People Vote event: The ACLU is Kris Kobach’s worst nightmare. 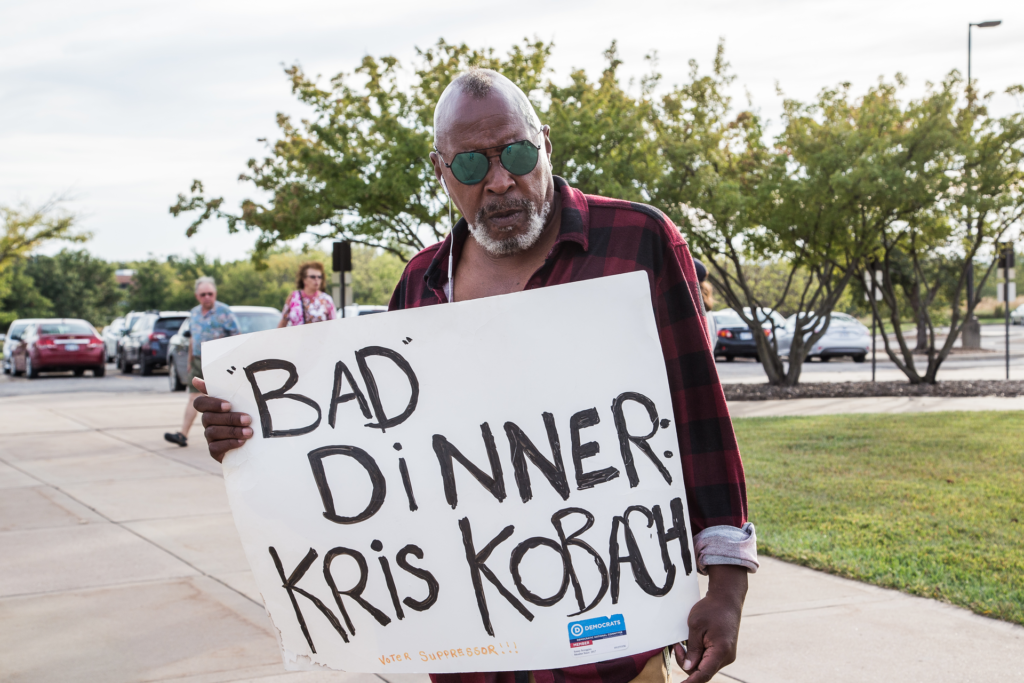 The organization’s lawyers are smarter than Kobach is. Its donation base — swollen from the backlash to Donald Trump’s election — is deeper than any legal fund in Kansas’ bankrupt state government. And the ACLU has the advantage of defending liberties that most Americans cherish, whereas Kobach is fighting for a narrow nativist vision tailored to those on the margins.

ACLU leaders clearly have no intention of sitting back on defense. By portraying Kobach as a national peril, they aim to rally citizens to oppose the kinds of voting restrictions he favors. And what better way to show your contempt for the man than to get more people to the polls?

“While Kobach attempts to attack the right to vote, the ACLU is taking the fight to him,” Brian Tashman, a strategist for the group, writes in a blog post. “In advocating for the protection and expansion of voting rights, People Power activists will be combating Kobach’s destructive policies that brought chaos to his home state.”

By promoting the “Let People Vote” event, the ACLU assembled a contact list of people around the country who, its leaders hope, can mobilize quickly when needed.

Kobach’s status as the face of GOP efforts to suppress minority votes around the country has raised the politician’s profile, yes. At the same time — and perhaps more crucially — he has elevated the profile of the ACLU’s Kansas chapter.

Which makes Micah Kubic the anti-Kobach.

When Kubic took over as executive director, in January 2015, he was one of three staff members. “I came in and made the coffee,” he tells me. “I took out the trash. I wrote our testimony for legislative hearings.”

Now eight staffers work out of the Kansas ACLU’s nuts-and-bolts headquarters in an Overland Park office complex, near Shawnee Mission Parkway, and the chapter is still hiring. It opened a satellite office in Wichita this summer. Although the chapter gets involved in a range of topics, its priority areas of advocacy are criminal-justice reform, defending the rights of immigrants and, of course, voting rights. Kubic spends much of his time making appearances and giving speeches — about 150 a year, by his count.

This is not unlike Kobach’s schedule. The two men are also alike in that they share outsize brainpower, elite academic credentials and supercharged ambition. But their motives, ideals, associations and experiences are very different.

A short version: Kobach, 51, graduated at the top of his class from a Topeka high school, earned a bachelor’s degree from Harvard and a law degree from Yale, then made a name for himself by crafting laws to harass undocumented immigrants and make it harder for certain groups of people to vote. He has collaborated with the Federation for American Immigration Reform, which the Southern Poverty Law Center has described as a hate group.

Kubic, 33, graduated at the top of his North Kansas City High School class, earned a bachelor’s degree from George Washington University, then picked up a master’s degree and a doctorate from Howard University. His specialty is black politics. His work experience involves community building. He is the youngest-ever board chairman of People to People International, Mary Eisenhower’s international peace-and-friendship network.

I first heard about Kubic years ago, from teachers at Foreign Language Academy in the Kansas City Public Schools. Kubic was in college by the time my child reached middle school there, but the staff still talked about him.

Mary Morin, a computer teacher, recalls that she assigned her students to compile a booklet consisting of an original poem and a few other poems that they liked. Kubic turned in a binder three or four inches thick, she says, complete with his own illustrations.

By the time he reached his senior year in the North Kansas City School District, Kubic had racked up national honors in debate and writing competitions and scored a couple of prestigious internships. The Clay County Commission actually declared a Micah Wade Kubic Day to recognize his accomplishments. Kubic accepted the honor dressed in a suit and a bow tie — a flourish he still favors. “I’ve always worn bow ties, and now I love them,” he tells me. “People give them to me for gifts, and I have about 150 of them.”

Once Kubic left for college in Washington, people figured they’d seen the last of him in KC. But immediately after graduation, he turned up at City Hall, working as an aide to Councilman Troy Nash, for whom he had campaigned as a teenager.

“He kept that place running,” Nash says. “He just moved so fast. Everybody and everything was important to him. He really is one of the most gifted human beings I’ve ever met.”

Nash recalls a day when Kubic — who worked almost constantly and didn’t get outside much — ducked into Nash’s office, looking paler than usual. “Who is that?” Kubic asked his boss. Nash poked his head out and saw Schylon Clayton, an African-American woman who worked as an aide to another councilman. Several years later Kubic and Clayton married; they have a son.

Kubic returned to Washington in 2007 to obtain advanced degrees from Howard, a historically black university. Then it was right back to Kansas City, where he took jobs at Greater Kansas City LISC, a community-building group, and the Full Employment Council before signing on with the ACLU.

In the Kansas office, much of the heavy lifting for the past nine years has been the work of Doug Bonney, who recently retired as chief counsel and legal director but will continue to take some cases. Bonney worked on ACLU cases even before he joined its staff, and his résumé is loaded with successful outcomes in litigation involving church-and-state conflicts, LGBT matters, and legislative overreach on abortion and other issues. He had watched as unfounded allegations of voter fraud gave rise to legislative actions in Missouri and other states. When Kansans elected Kobach secretary of state in 2010, Bonney guessed that defense of voting rights might take up some of his time.

He was right. Bonney and other lawyers from the ACLU’s Voting Rights Project are involved in four cases stemming from a Kansas law, designed by Kobach, that requires proof of U.S. citizenship — usually a passport or a birth certificate — in order to complete a voter registration. That stipulation conflicts with federal law, which says states must offer a simple registration form, requiring no proof-of-citizenship papers, at motor vehicle offices. So far, Bonney and his colleagues have consistently thwarted efforts by Kobach and his allies to disenfranchise or limit voting for Kansans who register with the federal form.

Bonney tells me he sleeps just fine at night, untroubled by nightmares about Kobach. “I guess he believes his false claims that there’s this rash of noncitizen voting going on,” he says. “I don’t doubt his sincerity. It just doesn’t seem like an issue that has much of a chance at success.”

In the courts, this is turning out to be true. But confusion about voting requirements is complicating efforts to register new voters in Kansas. And a request by Kobach’s federal commission for intrusive data on voters prompted several thousand Americans to cancel their registrations.

If Kobach is giving Kansas a bad name among civil-liberties advocates, Kubic is doing his best to repair it. “I love this place,” he says. “I believe in this place. I think it’s important to defend the state’s history and reputation of being the free state. Not just a free state — the free state.” 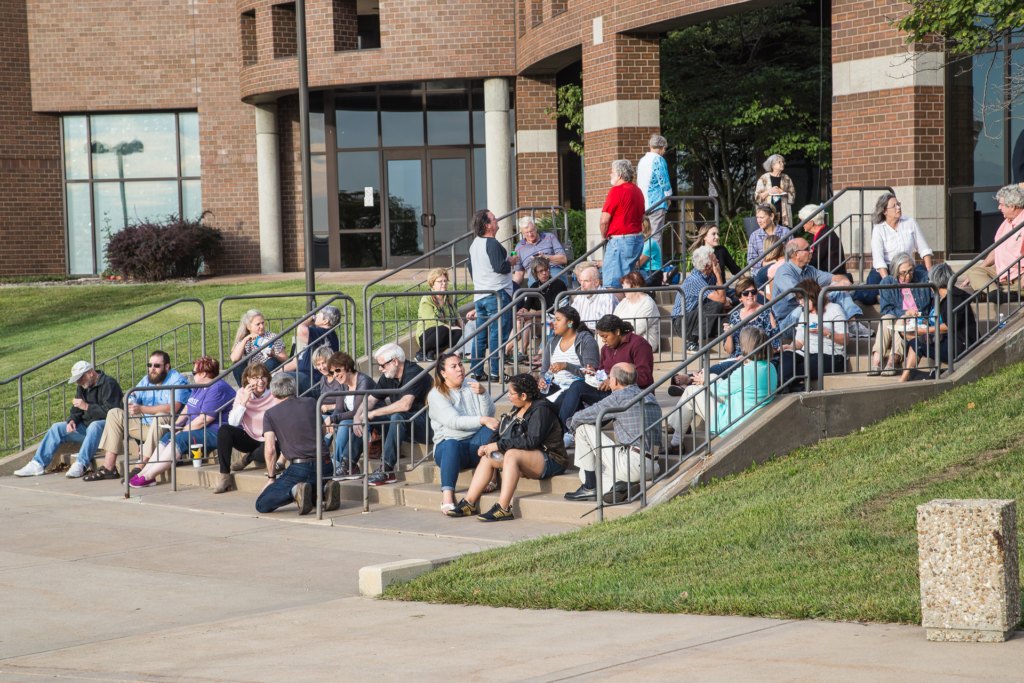 Being an almost ridiculously optimistic sort, Kubic will tell you that the challenges of defending civil liberties in the land of Kobach aren’t so much daunting as they are invigorating.

“I love the fact that we have the opportunity here to stop bad ideas from going viral,” he says. “When we can stop terrible policies that undermine civil liberties and civil rights here in Kansas, other folks aren’t even willing to try them.”

This strikes me as wishful thinking. Republican state legislatures toss bad ideas around like candy at a parade. If court rulings, fact checking and truth telling were enough to stymie such efforts, the phony notion of voter fraud would have been forgotten long ago.

Still, better to be the state where bad ideas are wrestled to the turf than the place that lets them fester. Kobach may be too arrogant to have nightmares, but the ACLU and its Kansas chapter mean to keep him fully awake.