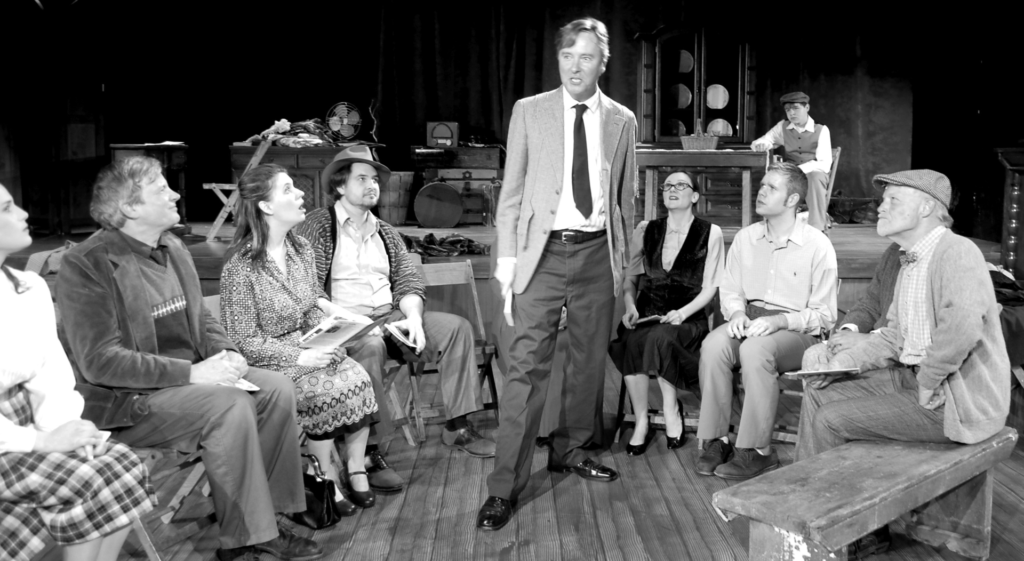 As a modern musical, Stephen Flaherty and Lynn Ahrens’ A Man of No Importance offers much of what you’d expect: a song celebrating a city (“The Streets of London”), an exclamatory showstopper about putting on a show (“Going Up!”), a slow-burning self-help number about getting stronger and moving on (“Welcome to the World”) and even a corny group-sing of the title at the climax, just after the moment when everything that had been going wrong suddenly goes right.

It does have its surprises and, in this Metropolitan Ensemble Theatre production, its pleasures. Although this is the MET’s first musical, it bears many of the young theater’s hallmarks: careful pacing, a junk-shop aesthetic, an emphasis upon the depths and the shallows of adult relationships. Director Karen Paisley is, as always, attuned to the ways that character radiates through our every interaction, and she coaxes some marvelous work from her leads. In the end, though, I couldn’t bring myself to like or loathe this good-hearted but half-good, sort-of stupid, kind-of realistic show.

It’s the story of Alfie (Robert Gibby Brand), a passionate director of amateur theater who, with likeminded but half-talented friends, stages shows but is in danger of losing the theater. In other words, A Man of No Importance brings psychological acuity to your basic Muppets plot. The show is humble, well composed and tenderly acted, more about melody and feeling than Broadway bombast. At its best, the incompatibility of its elements seems the point: Here’s exactly what it feels like to brood while the world pinwheels around you.

The middle-aged Alfie has a day job as a bus conductor in the Dublin of the early ’60s. At first, he strides about imperturbably, his life and bearing every bit as pleasant as he claims in song in the title number (a chipper get-to-know-the-setting kick featuring the full company). He seems to fit right in with the ensemble around him, musical theater characters who, in their musical theater way, each feel only one thing at a time (usually exactly what the plot needs to keep ticking along). Some of what they feel in Act One: the pulse of Dublin, happiness about commuting, love of books, love of pints, and exhilaration at the thought of putting on a show.

As local color goes, they’re monochromatic, but we soon discover that Alfie isn’t. Not because he’s a closeted homosexual or because he pals around with an imaginary Oscar Wilde or because he’s in hopelessly unrequited love with Robbie, the boy who drives his bus. No, it’s because Alfie is a real person, especially as played by Brand, who manages to combine tasteful reserve with striking emotional nakedness.

Alfie suffers, but the show must go on. He assembles his St. Imelda’s Players, a church-based troupe that consists of every person who rides his bus. He’s mounting Salome, Wilde’s tragedy about exotic dancing and the beheading of John the Baptist, a play banned in England until almost 40 years after Wilde wrote it.

A pair of amusing set-piece numbers chart the company’s excitement and rehearsals, both highlighted by strong ensemble work from Danielle Gibbs, whose intentionally graceless tap routines are the show’s funniest moment, and Alan Boardman, whose achingly crooned “The Cuddles Mary Gave” is its sweetest. As Alfie’s sister and her suitor, Licia Watson and Paul E. Orwick craft full-bodied people; they sing well, too.

Through all of this, Alfie struggles with his Catholic guilt. We know this because the struggle rages across Brand’s face but also because Ahrens’ lyrics jackhammer the point: He struggles with his Catholic guilt, we hear. By the second act, when the church elders are expressing reservations about Salome, the weight of loneliness has Alfie dressing up like Wilde and tempted to hook up with a shady pub dweller who knows Alfie’s secret.

Director Paisley again indulges her widescreen vision, but this time the theater is too intimate for it. Her staging here makes us feel as though we’re sitting in the optometrist’s chair, switching from lens to lens. The crowd scenes are close up and bustling, making it tough to follow the action, and the most intimate scenes are staged far, far back from the front rows.

Still, Paisley directs the smaller scenes and songs with such understated humanity that, even as the show hits many of the modern musical’s marks, it often retains the sobriety of a serious play. This is the rare musical that never overwhelms; it asks us instead to lean forward, to actually care about Alfie.

I did care — much more than I did about the play he was staging. (If he’s savvy enough to repress his urges, why is he dumb enough to stage Salome in a church?) Again, it’s like the Muppets. We don’t worry that Kermit is going to lose the theater, because every damned bear, pig and chicken is going to be there for him at the end. We might feel, though, as he broods backstage, how hard it is to bear one’s greenness.