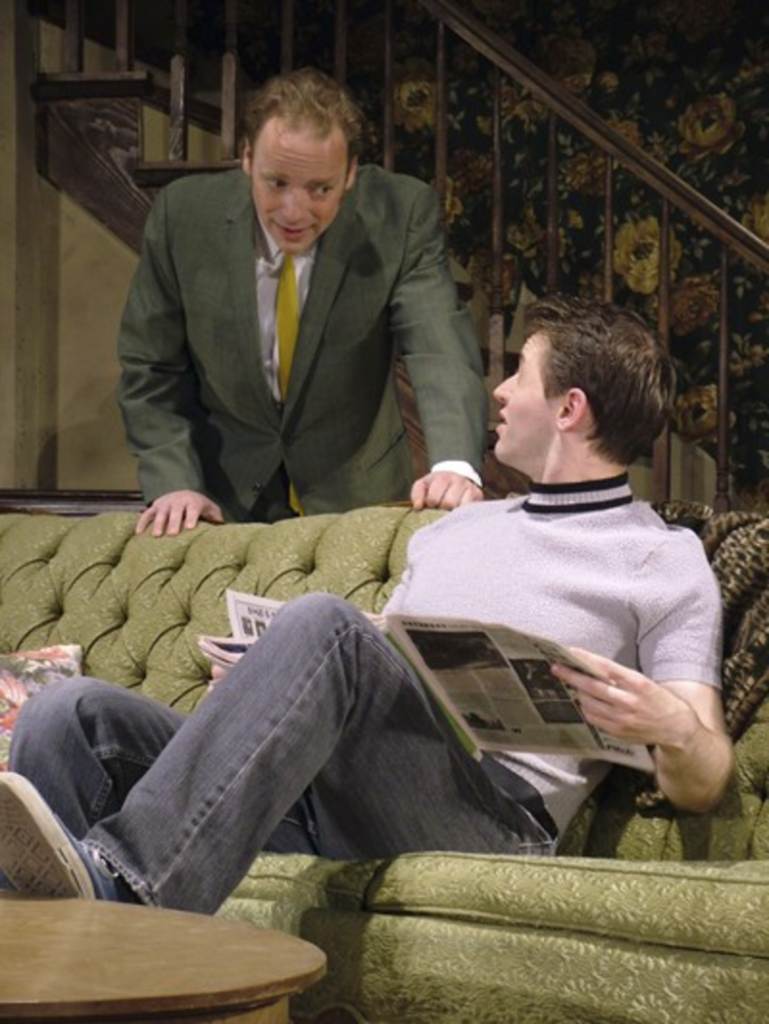 Thanks to Harold Pinter, serious playwrights no longer suffer the obligation to tell us what their plays add up to. In his breakthrough drama The Homecoming, now 40 years old, no character ever says “homecoming.” No characters seem aware that their lives might in some way represent something bigger. Nobody mentions that one of the story’s three brothers is a pimp, which makes real-life sense. If your brother has been a pimp for years, how often does the subject come up? Pinter so adeptly pared expository nonsense that ears accustomed to his work simply burn when the characters in some lesser play (like last week’s A Lesson From Aloes) jaw on and on, working out the playwright’s metaphors.

If the brothers and fathers in The Homecoming saw a metaphor coming, they’d stub out their cigars on it.

After enjoying a hit Broadway revival last year, The Homecoming is opening the season at Metropolitan Ensemble Theatre. Director Bob Paisley’s production is sturdy, sometimes inspired, and funnier than you might expect.

As we watch these awful North London family members claw, in their ratty living room, for whatever meager power they can get over one another, we’re left to claw, too — for answers. Through the first scenes, Max, the hobbled and jittery patriarch, squabbles with his son and his brother and says, of his dead wife, “Even though it made me sick to look at her rotten stinking face, she wasn’t such a bad bitch.” Some newcomers are bound to wonder: Yes, but what about these awful people?

Playing Max, Allan Boardman is admirably unlikable, but he’s not especially compelling. Confronting the brother and the two sons who live with him, Max tacks between viciousness and dewy nostalgia. Usually, he winds up abusing the family he depends upon. The writing shines, but the performances are uncertain. As they argue about mundane things, only Matt Rapport, who is excellent as the wicked Lenny, seems clear on whether it’s an everyday occurrence for these men to threaten to kill each other.

Not a moment too soon, Jan Chapman turns up as Ruth, the wife of Max’s third son, Teddy (Hughston Walkinshaw, amusingly emasculated). Chapman’s Ruth is a tall glass of something that burns going down: She’s beautiful, bored, playful, frank, and so objectified by the men around her that she may as well wear a placard reading “Lover/Sister/Mother/Wife.” Chapman underplays mightily, but Ruth is impossible to look away from. She’s seductive even when bound up in a raincoat; later, when she and Rapport slow-dance to Miles Davis, cuckolding her husband right in front of him, she’s so commanding a presence — and so skilled at seeming to be exactly what each man needs — that we relish this almost impossible scene.

From there, The Homecoming is a poison pleasure. Things get darker and funnier and better acted, right through the bleakly hilarious climax. As Pinter’s characters renegotiate the terms of their lives together, Paisley’s production, through matter-of-fact performances, empha­sizes the flat transactions of the emotional arrangements that define our lives.

We have to think through the hell in The Homecoming. In the years since Holocaust plays have become their own genre, audiences come primed for the plunge. Even a young-adult drama like James Still’s gently harrowing And Then They Came for Me: Remembering the World of Anne Frank, now at the Coterie Theatre, demands audience familiarity with The Diary of Anne Frank, something I hope to God the kids still have time to read between their standardized tests.

Using interview footage with Holocaust survivors Eva Geiringer and Helmuth Silverberg, the excellent Angela Cristanello and Nathanael Card act out scenes from these survivors’ lives, and the show quickly and movingly sketches out the lives of two families mentioned early in Anne Frank’s diary. Helmuth was her near beau and Eva one of her first friends in Amsterdam.

At first, the show is hectic, and Still leans too heavily on Frank’s own story. Geiringer and Silverberg don’t matter simply because they knew the century’s most famous diarist; when the families go into hiding, their stories at last get precedence. Their fates spread them across a ravaged Europe powerfully evoked by shadows and war sounds and Jeffrey Cady’s haunting projected montages. (This is a leap forward for the use of video in Kansas City theater.)

Still, the actors and the writing have much of the crowd swallowing sobs. Cristanello stands raw-eyed and trembling against the snowscape of Auschwitz and speaks, with all her earlier girlishness stripped from her, of a rat nibbling the blood off her frostbitten feet. Moments like these, realized with painful clarity by director Cynthia Levin, don’t just show us hell. They singe us with it.