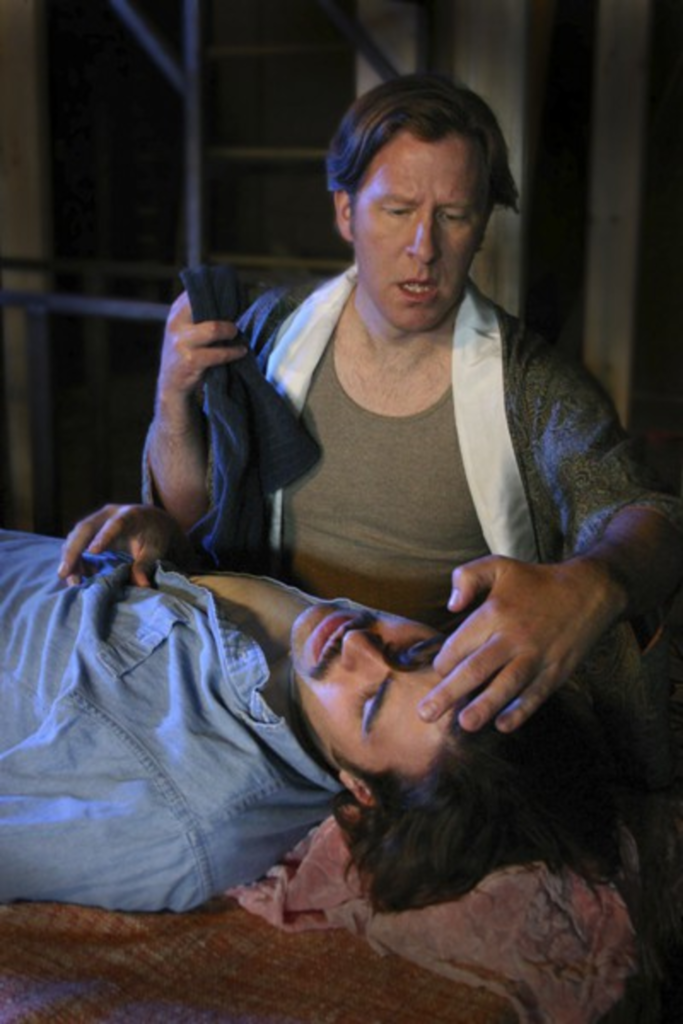 Metropolitan Ensemble Theatre’s courageous production of Terrence
McNally’s Kiss of the Spider Woman (music by John Kander
and lyrics by Fred Ebbs) isn’t quite what I would call a work in
progress. That would imply that some full triumph were imminent —
or even possible. Instead, I fear that this attempt to stage a serious,
gorgeous and lavish Broadway musical in a garage is destined to remain
more notable for its ambition than for its achievement.

Significant achievements are on display here: memorable
performances, excellent singing, and a second act that boasts at least
four moments of extraordinary power. The trouble is that in this show
— set in an Argentinian prison but often bursting into the
fantasies of a movie-mad in­-mate — the lavishness of the
production numbers is the subject of the production numbers.
That’s tough to achieve in a space like the MET’s.

Strong acting is achievable anywhere, though, and we’re treated to
it here. Charles Fugate does marvelous work as Molina, our fantasizer,
a gay window dresser imprisoned on a morals charge. With little
affectation, he reveals Molina as bighearted but bristling, primed for
humiliations from a world he only wants to love. Fugate moves me every
time he demonstrates the pleasure that this lost man takes in the
romance of his favorite films, the plots of which he recounts for
Valentin (Sam Wright), a political prisoner recently moved into his
cell.

Molina exults in song, dance, drama and glamour. At first, Valentin
finds all this foolish. Slowly, in several well-acted scenes, the men
become closer, discovering the illusions they share: that to suffer is
noble and to die for a cause is nobler still. The fact that one comes
to this understanding from movies and the other from revolutionaries is
an irony that director Karen Paisley’s production has the wit to
exploit.

MET has no trouble capturing the prison. Tom Rothwell’s powerful
set, with its bars and catwalks, looms over the fantasy numbers.
Unfortunately, Molina’s fantasies were not fully realized on opening
night. In a series of escalating production numbers imagined by Molina
and Valentin, Jan Chapman appears as Aurora, Molina’s favorite film
starlet. She’s a sleek stiletto of a woman sheathed in ball gowns or a
spectacular cape (bravo to costume designer Atif Rome), called upon to
represent everything from romantic idealism to death itself. Chapman is
a vision of glamour and a hardworking dancer, and her smoky alto has
its appeal, but she’s not singer enough for the part. Handling gentle,
slower melodies, she’s unpersuasive; only when she hits the big endings
does she exhibit the confidence to get the songs across.

Sometimes, a dozen or so prisoners join her, filling the stage
— and, one supposes, their inner lives — with impossible
music and dance. The razzle-dazzle is raggedy. The dancers seem to be
thinking about hitting their steps, which is probably the last thing an
audience should notice.

Smaller numbers are more moving. The choral passages are strong, as
are the numerous songs featuring two or three characters airing their
souls in counterpoint. Fugate and Wright excel at character-based
singing, treating their solos more as monologues than showstoppers.
Molina kills on “She’s a Woman” and “Mama, It’s Me,” dramatic
highlights both, and Wright’s defiant bearing lifts “The Day After
That” — a song about the inevitability of political change
— from personal conviction to what feels like a statement of
universal truth. It helps that he’s joined by other prisoners
representing “the disappeared” of Argentina’s dirty war.

A commanding performer, Wright invests Valentin with the
self-conscious masculinity of a Hemingway hero. Valentin sweats,
suffers, and so believes in his cause — and its own romance
— that he’s sometimes pompous and prickish. Wright is adept at
this.

There is a power to what MET is attempting. Seeing a
cane-and-top-hat dance in a prison is stirring, but so is seeing a
splashy dance number crammed into a smallish performance space in a
garage. That said, as dancers fought for their spaces in the shadows of
the jail, I kept thinking: For prisoners and performers, tomorrow could
be better, but it probably won’t ever be ideal.