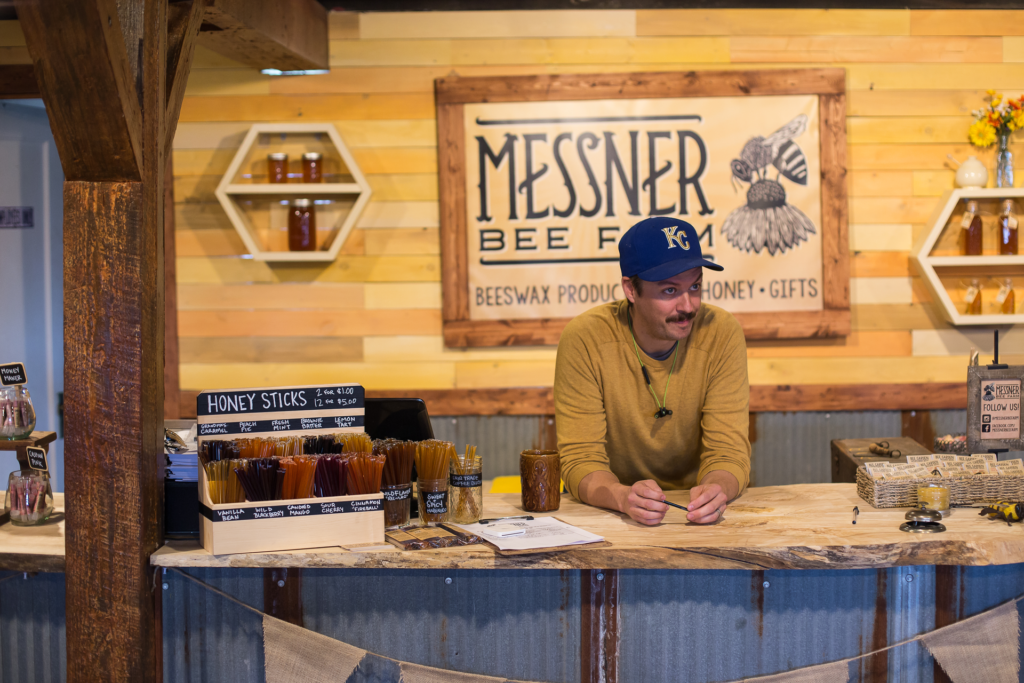 A few Christmases ago, Rachael and Erik Messner put a beehive on their wish list. She’d become interested in keeping bees after reading a book about homesteading. He was curious to test the notion that locally sourced honey helps allieve seasonal allergies.

A set of grandparents bought the young couple a hive, which Erik set up in their backyard. The learning curve was steep, he says. But once he got a feel for keeping a colony healthy and productive, beekeeping became a passion. “For someone who’s curious, there’s no end to things you can learn about bees,” he says.

Rachael came up with the idea to make lip balm and other cosmetics from the beeswax. When the items proved themselves a hit at local craft shows, Rachael decided to become a full-time apothecarian.

In October, the couple opened a shop in Raytown. Open three days a week, Messner Bee Farm sells lip balm, deodorant, candles, beard oil, solid perfume and other products derived from the wax of their bees and those of other beekeepers in the area. 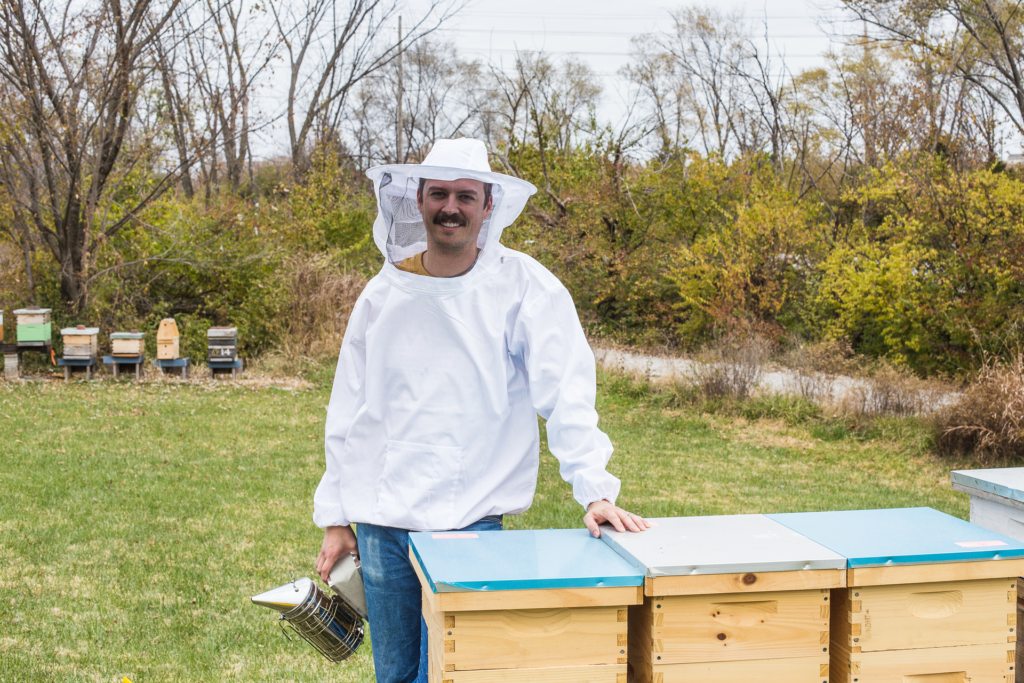 The lip balm comes in several varieties. Rachael says her favorite balm to wear is Lavender Lemonade; her favorite lip tint is Amish Rose. “It’s wonderful to make a product that’s such a necessity and a treat at the same time,” she says.

The couple brought formidable skills to the endeavor. Rachael, who has extensive experience working for small businesses, learned the software she uses to design the product labels as a student at the Kansas City Art Institute. Erik trained as a structural engineer and is fascinated by the complexity of the hive.

“A bee is kind of cool,” he says. “But a hive, it’s like a superorganism. It has its own mind. It’s like a mammal. Each hive out there has a different personality, a different set of genetic traits. They’ll respond differently to stress. As humans, you can’t help but develop a little affection for anything that gets to be like that and has its own personality.” 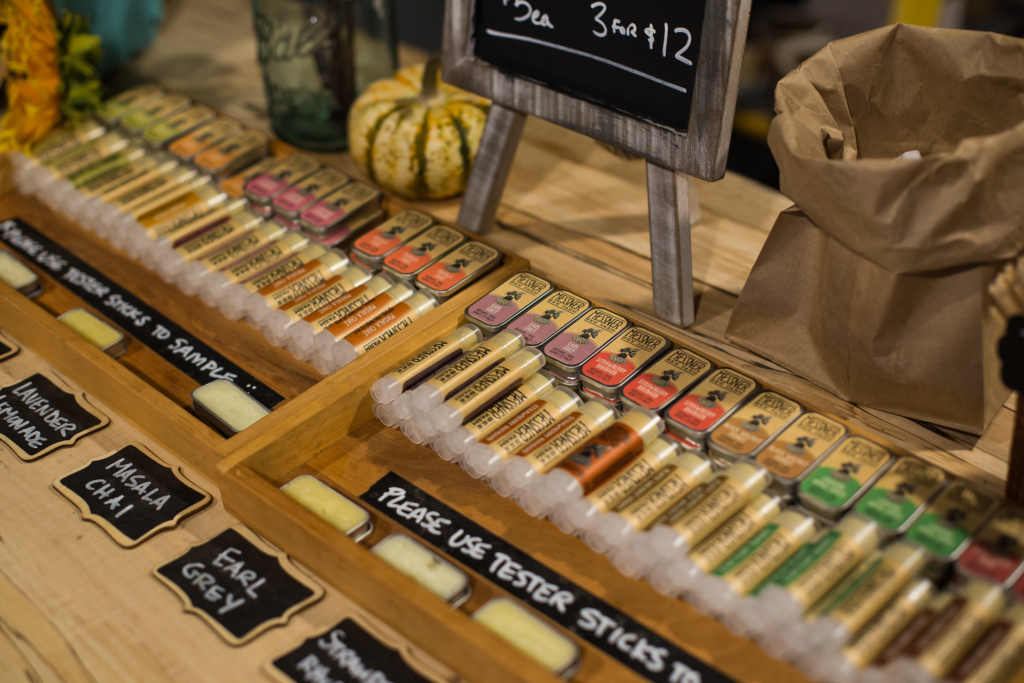 The shop occupies a two-story clay-tile building that dates to the 1920s. It was a chicken house for an adjacent restaurant that sold all-you-can-eat meals for a dollar. More recently, Erik’s mother ran an interior-design business out of a stone house on the property that she remodeled.

Rachael and Erik now live in the house, which sits between the shop and Yellow Rock Barn, an event space the couple will manage after the new year. Couples who rent the barn for weddings and receptions have begun asking for honey jars as favors.

Lip balm and bottles of raw honey are the Messners’ top sellers. In addition to plastic tubes, Rachael packs the lip balm into lockets. “It’s not like everybody buys one, but the people who buy one buy five,” Erik says of the lockets. 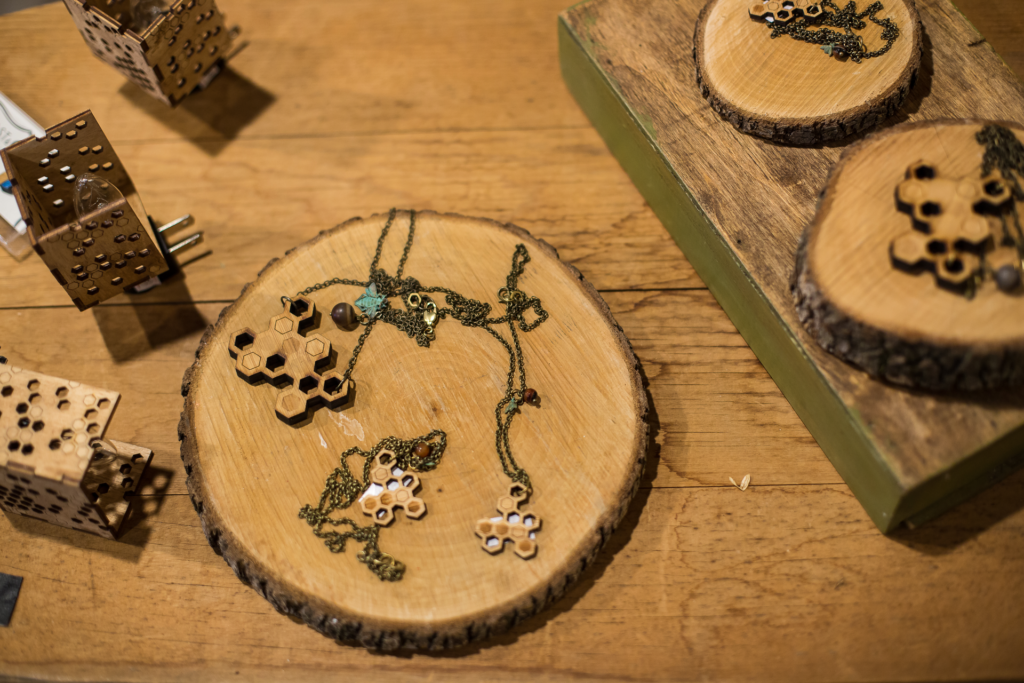 The shop reflects the Messners’ pride in Kansas City’s maker community. The couple went to high school with ceramics artist Kate Schroeder, whose custom-designed honey jars are sold in the shop. The store carries Nectar Republic soy candles, Green Bee flour-sack tea towels and other items made in Kansas and Missouri.

Beekeeping equipment is also available. The hive-curious can start with a mason bee house. While they don’t produce beeswax or honey, mason bees are docile pollinators. “People really love bees,” Rachael says. “They are genuinely curious about them and want to know what they can do to help them out.”

The bees appear to be helping Erik with his allergies. Before getting that first hive, Erik says, he could count on being miserable for two or three weeks a year. “Now, six years into beekeeping, I barely get a runny nose twice a year.”