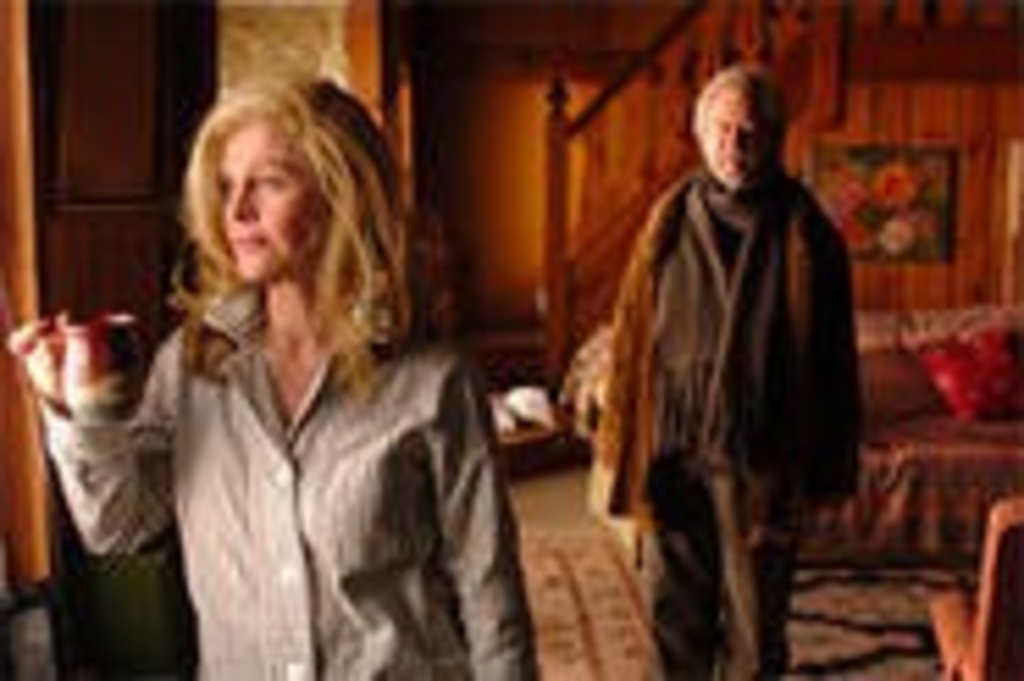 In the superb chamber piece Away From Her, intolerable pressure is brought to bear on the 44-year marriage of a college professor and his homemaker spouse after she is diagnosed with Alzheimer’s disease. Grant Andersson (played by veteran Canadian actor Gordon Pinsent) and his wife, Fiona (an artfully wrinkled and radiant Julie Christie), have weathered a difficult but durable union in which much, wisely or not, has gone unsaid. Now they’ve settled into placid companionship in their Northern Ontario house, reading and cross-country skiing together. They make a handsome, low-key couple against the snowy landscape: Grant with his white beard and steady, enigmatic gaze; Fiona with her elegant silver mane. When Fiona starts putting frying pans in the freezer, not much is said either. But when she starts wandering off and placing herself in danger, Fiona firmly and efficiently decides — with quietly anguished opposition from her husband — to enter a high-end nursing home. There, the gleaming surfaces and smooth-talking director (the excellent Wendy Crewson) stand in creepy contrast to the comfortable disorder of the Anderssons’ home.

There, just as efficiently, Fiona seems to forget who Grant is and takes up with Aubrey (Michael Murphy), a near-catatonic inmate she claims to have known in her youth. “He doesn’t confuse me at all,” she tells her bewildered spouse, whom she now treats as a slightly pesky guest. That lack of confusion, Grant will dimly grasp, says as much about the shortcomings of their marriage as it does about the loss of his wife’s faculties. In Away From Her, short-term memory may be going, going, gone, but the distant past that floods in to take its place can be devastating and, in its way, sublime.

Away From Her, which is adapted from Alice Munro’s short story “The Bear Came Over the Mountain,” is the first feature written and directed by the fiercely talented young Canadian actress Sarah Polley. Far from being the look-at-me calling card so many first-time filmmakers feel obliged to turn out, it’s an assured, mature work, at once humble and bold. Polley keeps faith with Munro’s precise, graceful prose while tailoring its linear progression into shapely cinematic form. In quick, impressionistic flashbacks to the breathless early stages of Grant and Fiona’s romance, Grant’s serial indiscretions, and the crisis that drove the couple out of the university and into a secluded country life, the movie mimics the elisions and eruptions of memory — and of marriage itself. Betrayals, blunders and periodic tumult smooth over time, only to surge back up when least expected.

A less attuned writer might have betrayed Munro — who is as severe with her characters as she is sympathetic to their clueless thrashings — by turning Alzheimer’s into a metaphor for life, complete with 11th-hour uplift. Here, Fiona’s illness, with its attendant confusion, loneliness and fitful oblivion, is real — specific, funny and utterly heartbreaking. With unobtrusive skill, Polley weaves the couple’s suffering into a great love story that begins with Grant’s terrified denial and ends with unconditional devotion.

Munro has never been an enthusiast for Earth Mother wisdom, but she is slyly fond of female practicality. Helped along by two women who have his number — a friendly but brutally candid nurse (Kristen Thomson) and Aubrey’s pragmatic wife (Olympia Dukakis) — Grant comes to understand that, one way or another, he has always been away from Fiona. And so he gives Fiona a gift that’s either a ploy to bring her back or proof of his hard-won arrival at a state of grace. Knowing Munro, it’s probably both, and at the end of this lovely movie, with a plaintive K.D. Lang singing Neil Young’s “Helpless,” there’s a meeting between Grant and Fiona that may be a reward for his selflessness, a punishment for his sin,s or another turn of the screw in a life without guarantees.