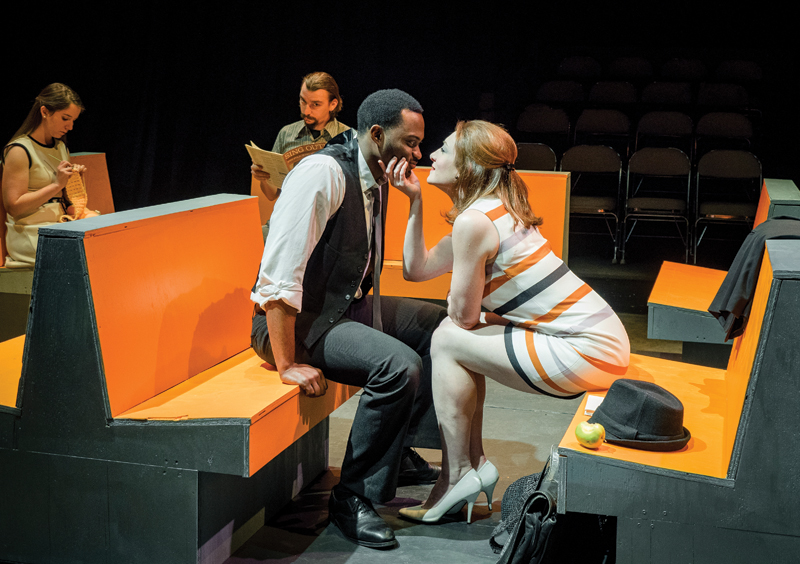 This year, Black History Month coincided with a battery of protests and demonstrations over executive orders — the timing and tenor of which recall those of the Civil Rights era. Meanwhile, at KC Meltingpot Theatre, a revival of Dutchman by LeRoi Jones (better known as Amiri Baraka, a name he adopted later in life) reminds us that we have a lot of ground yet to cover.

The 1964 script — which dates to the months just before the Civil Rights Act was passed — is half play, half polemic, and 100 percent worth seeing.

The brisk one-act takes place on a New York subway car, where Clay, a 20-year-old black man, sweats through the sticky summer heat in a suit and tie. Enter Lula, a 30-year-old white woman, chomping through a tart green apple and weaving, drunklike, through the train in a breezy dress and heels.  She plops down next to Clay (though the train is empty). She offers him an apple (the biblical symbolism heavy as a hammer). She curls an arm around his neck as though she has every right in the world.

This first scene is an uncomfortable reminder of the confidence with which white people throughout history have possessed and policed black bodies. Director Nicole Hodges Persley directs her Lula (Laura Jacobs) through enough violations to staff a sexual-harassment training video. Lula grabs Clay’s thigh, rubs his hair. By the end of the scene, she’s straddling him in the middle of a subway car, laughing and carefree.

Jacobs is by turns fascinating and chilling as Lula, a provocateur who toys with Clay for her own amusement. She accuses him of ogling her one minute, presents her ass like a baboon the next. The part isn’t exactly subtle — think “monster in a horror film for men’s-rights activists” — but Jacobs’ self-possession and shrewd delivery keep it on the rails. “I lie a lot,” she admits at one point with a simplicity that gives us goosepimples. “It helps me control the world.”

Frank Oakley III is equally adept as Clay, a mild-mannered poet who seems at first content to play the ingenue. He deflects Lula’s advances lightly, politely, plays along with her sexual fantasies. But when Lula starts to mock his racial bona fides, the pot boils over: Oakley launches into a blistering monologue that reads like, well, Baraka at his most righteous.

Oakley’s hard-fought calm makes the proceedings even more intense. He’s gone to great pains, he suggests, to give himself over to “my people’s madness,” the peculiar neurosis that makes Bessie Smith sing and Charlie Parker play and Clay (and, by extension, Baraka) write, when the “sane” thing to do would be to lash out at people like Lula.

Clay’s monologue is the beating heart of the play, and Oakley handles it well. But a couple of directorial choices dampen its effect. Meltingpot’s production includes an unnecessary intermission between scenes I and II, resetting the clock on Baraka’s slow-burn build. (Even with the intermission, the show runs under an hour.) And while this production has been blocked for thrust, with moments played toward all three seating units, only the downstage unit was used for Saturday night’s performance. In crucial dramatic exchanges — including Clay’s explosive late-play monologue — the actors had their backs to the audience. More aggressive ushering would help.

But Meltingpot’s other choices (including Rana Esfandiary’s angled, retro-orange set) live up to the material. Dutchman hinges on a violent climax, and the scene is smartly choreographed, leaving us slack-jawed at both the pace and the banality of the resolution. I’ll avoid spoilers; suffice to say that the turn amplifies popular stereotypes of black sexuality and white innocence to their grotesque (and seemingly inevitable) conclusion.

This isn’t an exercise in subtlety.

But racism — in our time, if not Baraka’s — often is. Dutchman feels timely in its insistence on prodding the more insidious forms into the light and calling them by name.