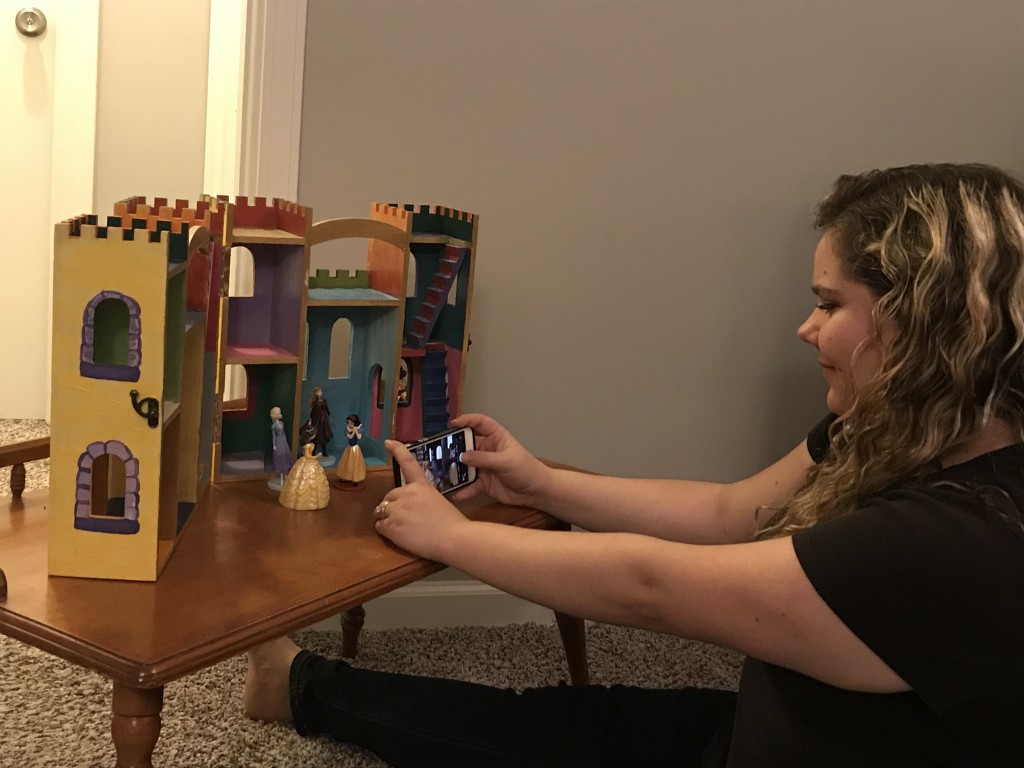 Maybe you’ve seen the picture floating around the internet of a wide-eyed Aladdin figurine who appears to be on meth, according to the captions. It’s so widespread that it often doesn’t get credited, but the comic observation came from Kansas City actor Melissa Trierweiler, who has that and more than 150 other photo episodes involving her Disney figurines up on her Tumblr, The Official Princess Club.

“It’s funny because (the Aladdin one) got reposted, stolen and posted all across the internet. I know I’m powerless to stop it these days. I was just going off a joke about how creepy Aladdin’s eyes were on the figurine,” Trierweiler says.

Each episode is a series of photos with Snapchat text over the top for dialogue.

Over the last seven years, her creative impulses with the figurines have ebbed and flowed, but a year full of quarantines and lockdowns was the perfect storm to get her to create more of these.

Most of the scenarios involve Disney characters living together in one big house, almost like a reality show. Trierweiler has long been a Disney fan and received her initial set of figurines as a Christmas gift when she was a freshman in college. 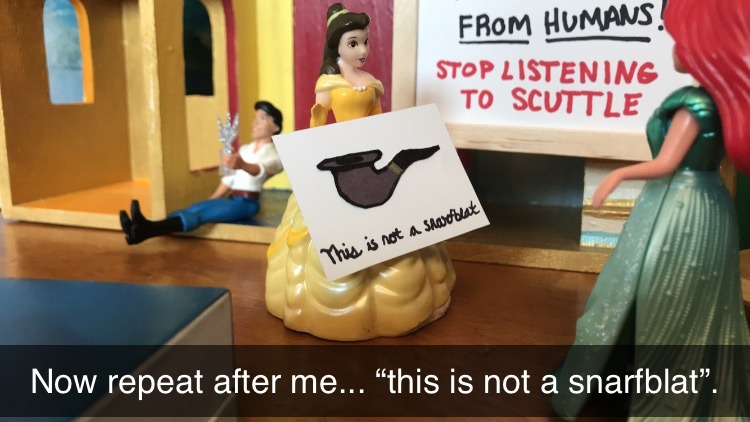 “I was coming up with funny scenarios and sending them to my friends on Snapchat,” she says. “I was a college kid playing around with dolls, essentially.”

She posted her initial eight episodes—including the Aladdin one—on Tumblr shortly afterward. The reaction wasn’t exactly what she was expecting. She’d hoped that for New Year’s Day 2014, she might get up to a total of 2,014 followers.

“They caught on. People thought they were funny. On New Year’s Eve, it kind of skyrocketed, and it went viral,” she says. “BuzzFeed picked it up, and I got 10,000 followers overnight.”

Her name wasn’t—and still isn’t—on the Tumblr account, so while she had some internet fame, she was still relatively anonymous.

“I’m not a person who’s used to this kind of attention,” she says.

Since that initial burst of fame, her set of characters has continued to evolve. She built and painted a backdrop of a house for the dolls, and she’s added a few familiar cartoon faces.

Her original set of figurines had the princesses and princes chronologically from Snow White to Rapunzel. Trierweiler already had a few Ariel dolls as well. Since then, Pocahontas, Mulan, Merida, Elsa and Anna have joined the group. 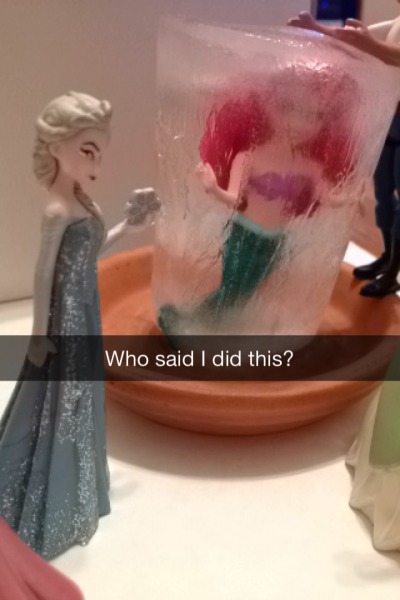 “I think that people kind of got a kick about how their favorite characters might interact with each other,” she says.

She often gets positive comments and even suggestions from her followers on what to do next. After that first splash of internet fame dissipated, she kept a core base of followers who eagerly await her posts, even when months or even a year has gone by between them.

“Sometimes, if I go a long time, it’s actually a really good feeling. It feels good that there’s still that band of followers. That makes it worth it,” she says.

Part of that response includes drawings from fans.

“I have gotten some really cool things, where people will do fan art. They’ll actually draw the princesses and quote from my episodes,” she says.

Trierweiler doesn’t do much on social media outside of her Tumblr, but she enjoys the creative opportunity it affords her.

“Tumblr is just kind of good. You can throw anything out there. If it picks up, it picks up. If not, it’s lost in two seconds. I like to put my trial comedy stuff there,” she says.

Although she likes to give all her dolls a chance to shine, her favorite has always been Ariel. As a teenager, she even starred as Ariel in a stage production of The Little Mermaid.

For some drama between Ariel and Elsa on Tumblr, she actually froze the mermaid figure in a glass of water.

Each episode typically takes 30 to 45 minutes to put together, between setting things up and making sure it works like she envisioned.

“It does take more time than people might expect,” she says. 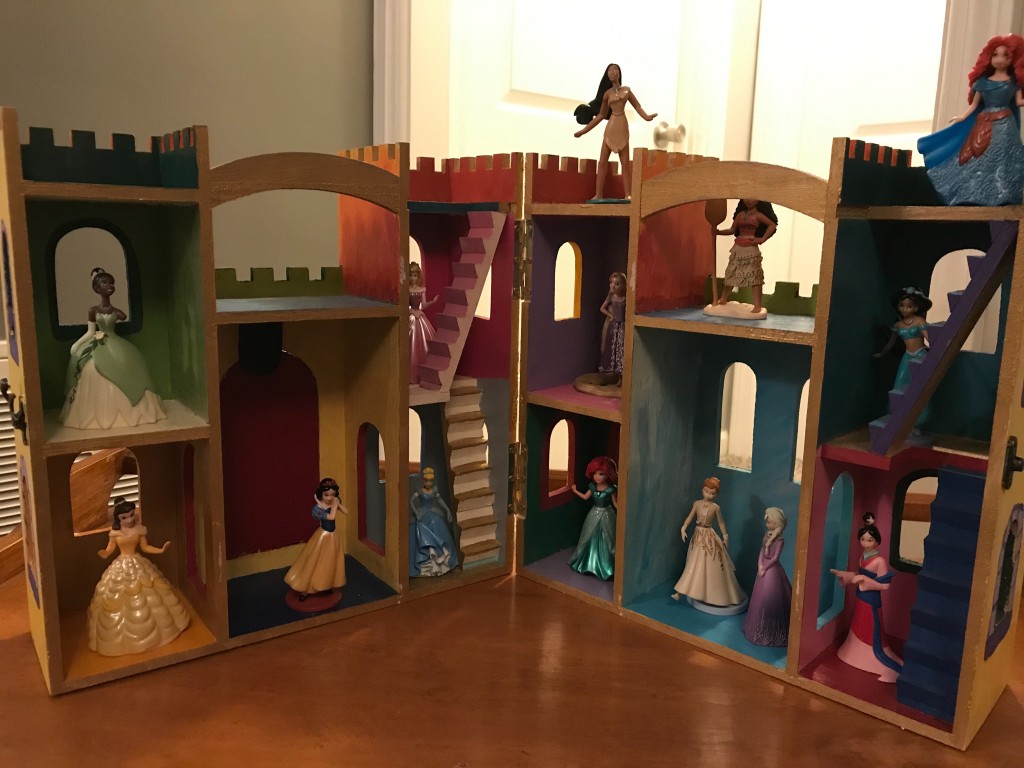 When she’s not creating princess scenarios, Trierweiler has been onstage with the Kansas City Public Theatre and Fishtank Theatre and performed with a troupe that teaches kids about STDs and HIV. Behind the scenes, she teaches and works the box office at the Coterie Theatre and directed a show at Whim Productions.

“I think it kind of just goes hand in hand. I love musical theater. I already loved Disney movies and the songs. I love to sign the Disney princess solos,” she says. “Sometimes when I’m singing, I’ll get an idea for an episode.”

For the most part, it’s an exercise and creativity, and the whole thing brings her a lot of joy.

To check out The Official Princess Club, go to the-official-princess-club.tumblr.com.